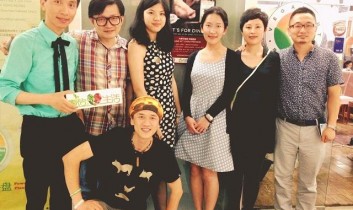 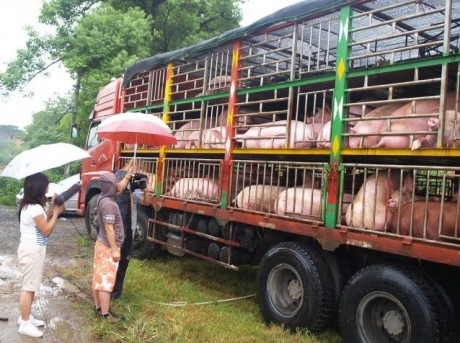 From the filming of “What’s For Dinner?”

Today, I’m excited to tell you about a screening tour across China of the 30-minute documentary What’s For Dinner? Providing a unique look into the rapid growth of industrialized animal agriculture in China, the film follows various people in Chinese society – from a retired pig farm worker to a vegan restaurant owner – and examines the impacts of the country’s huge shift in food production and consumption on sustainability, public health, food security, climate change, and animal welfare.

What’s for Dinner? is a production of Brighter Green, a public policy “action tank” on environment, animals, and sustainability, for which I’ve been fortunate enough to work this summer, in addition to my internship with Our Hen House. You may remember Brighter Green’s important work from OHH’s interview with Jessika Ava on Episode 216 of the podcast, or from Jessika’s collaborative feature with Brighter Green Executive Director Mia MacDonald on the expansion of industrialized dairy production in Asia, based on Brighter Green’s latest policy paper, “Beyond the Pail: the Emergence of Industrialized Dairy Systems in Asia.”

What’s For Dinner? has already been shown at film festivals, conferences, and on campuses across the U.S., and in Europe, India, and Korea, but had not yet screened in China until this summer. When Brighter Green Associate Wanqing Zhou’s paper “The Triangle: Factory Farming in the U.S, China and Brazil” was accepted for presentation at the Global Research Forum on Sustainable Production and Consumption in Shanghai this past June, the organization saw an ideal opportunity to release the newly completed Chinese-subtitled version of What’s For Dinner? throughout China.

Recently, I caught up with Wanqing, the main organizer and host of the screenings:

Alessandra Seiter for Our Hen House (OHH): Can you explain what you’ve been doing this summer in China with What’s For Dinner? Give us a “day in the life” of your work with the screenings.

Wanqing Zhou (WZ): I am bringing What’s For Dinner? to different cities in China and discussing the topics of meat consumption and production, and the relationship between diet, the environment, people’s health, and food security. Jian Yi, the film’s director – and Xie Zheng, the founder of the organization Don’t Eat Friends, sometimes help me host the screenings. So far, we’ve hosted twelve screenings in six cities. 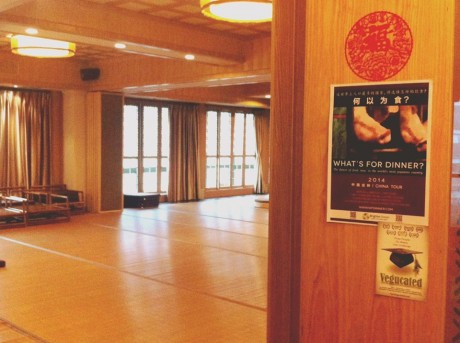 A typical day during the screening tour involves taking an early morning train with Jian Yi to the next city on our schedule and having lunch with the local organizers with whom we’re collaborating. The screenings take place in the afternoon and usually last for two-and-a-half hours. We screen both What’s For Dinner? and Vegucated, then host a panel discussion.

OHH: Why did you want to bring What’s For Dinner? to China?

WZ: The issues discussed in What’s For Dinner? are very relevant to China. Without the public becoming aware of them, nothing in the country can be changed. People in China are just starting to be exposed to information regarding meat consumption, pollution, climate change, and health. However, the information tends to be quite general, and there is not yet a local documentary film that illustrates the problems. I think it’s very important the Chinese people see reflections and reevaluations of animal agriculture that come from within the society, as shown in What’s For Dinner?.

OHH: What people and organizations have you collaborated with?

WZ: We have collaborated with local and international environmental groups, media and communication companies, local community governments, vegetarian associations and restaurants, and business clubs. The most prominent among these groups include the Zhejiang Vegetarian Food Association (ZVFA), the Shanghai branch of Green Drinks, Climate Wire journalists, the Shanghai Academy of Natural Resources, and the Chinese Academy of Social Sciences. 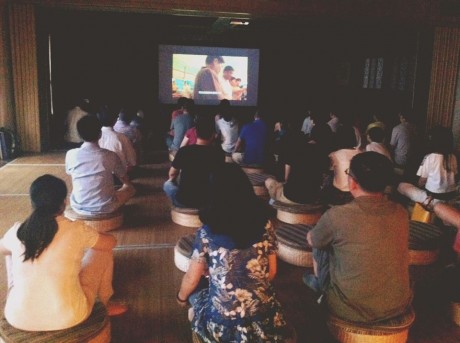 OHH: How have attendees responded to the film?

WZ: The attendees come from all educational and cultural backgrounds – from illiterate villagers to graduates from top universities, both Chinese and foreign-born. They’re attracted to the screenings by different facets of the topic, including health and nutrition, food safety, the environment, business opportunities, and more.

People have spoken highly of What’s For Dinner?, saying that it’s mild yet alerting, resonates with their daily life, and inspires change.

The attendees have been most interested in the discussion of health – they’ve asked if eating less or no meat will provide adequate nutrition, as well as how to differentiate between genetically modified and organic foods. Some attendees have expressed interest in or concern for the environment and food security, but individual health has been the major topic at most screening events.

OHH:
What is the general attitude toward veganism in China?

WZ: Among the younger generation, more people are aware of the positive effects of being vegetarian or vegan. The abstention from eating animals used to have religious connections, such as to Buddhism, but that connection is becoming weaker these days, especially as health and environmental concerns appear.

Most meat-eaters in China over the age of 40 see not eating meat as “nutritionally deficient” and/or “extreme.” They might call a vegetarian or vegan person “unfortunate, but mentally strong,” because they would view such an individual as struggling economically, since they’re not able to enjoy the “most delicious foods.” However, only a very small portion of vegetarian or vegan people in China are in an economically difficult situation, so most vegetarians or vegans actively choose such a diet. 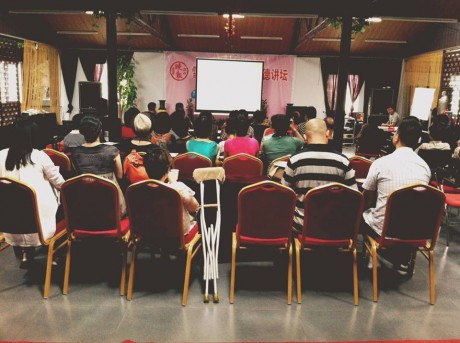 Most vegetarians or vegans in China view their diet as a personal choice, rather than as part of a value system. They all do it for different reasons, and they don’t want to label themselves.

OHH: Do you and Brighter Green have any plans for advocacy in China beyond the screenings this summer?

WZ: Right now, Brighter Green is encouraging Chinese civil society and journalists to participate in fact- finding tours with sites in Paraguay, Argentina, and Brazil, organized by our partner, Global Forest Coalition. The tours will focus upon the environmental and social impacts of the production of feed for farmed animals (e.g., soy monoculture). We hope that Chinese participants will bring home what they have witnessed on a tour and provide the seeds of change. Several Chinese individuals and groups have already expressed interest in participating.

OHH: You recently presented your paper on “The Triangle” of factory farming in the U.S., China, and Brazil at the Global Research Forum on Sustainable Production and Consumption (congratulations, by the way!). Could you briefly explain your paper?

WZ: In short, I tried to use The Triangle to illustrate the relationship between the world’s three largest meat and feed producers and consumers.

The U.S. has exported the industrialized, intensive animal production pattern of factory farming to countries including Brazil and China, along with its meat-centered “ideal” diet and fast-food culture. China is now the destination of huge amounts of animal products and feed grains. This puts pressure on the world’s largest producers of such products, including the U.S. and Brazil. 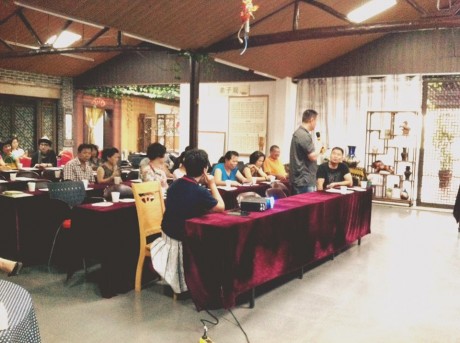 Brazil is especially important because large areas of rainforests and savannahs are being cleared to grow crops in order to meet growing demand for meat and feed. The Amazon Rainforest is not only home to a vibrant ecosystem, but is also of great global importance as a carbon sink, a storage unit of sorts for biodiversity and biomass, a resource provider, and a climate regulator.

The appearance, adoption, and expansion of factory farming practices in these three countries represent the relationship between humans, our food, and the environment – one in which we have believed for the past 50 years or more. This relationship considers humans as the dominators and controllers of all natural resources, and believes that all species and environments – to be of value – should serve humans. 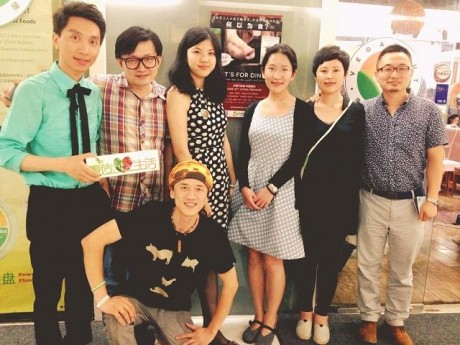 Panelists from one of the screenings of “What’s For Dinner?”

To respond to the expansion of the poorly-regulated factory farming system and the trend of growing animal consumption, we need the majority of the people – especially those who live in cities, in the case of China – to be aware that the over-consumption and over-production of animal products is not adaptive to the environment. Individuals, businesses, and social groups need to act first and lay the foundation for change, and policy will catch up with them.

OHH: What inspired you to get involved with Brighter Green?

WZ: I first got to know Mia MacDonald – the Executive Director of Brighter Green – and her organization during a screening event of What’s For Dinner? and Vegucated in New York City. I had been interested in the food-climate nexus for some time and thought Brighter Green’s work was very relevant. I also thought that more people, especially in China, should hear about the issues on which Brighter Green’s focuses, but I never thought I could be the one to bring What’s For Dinner? back home! It’s been a great experience and I have enjoyed every minute of it.