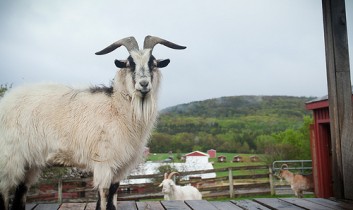 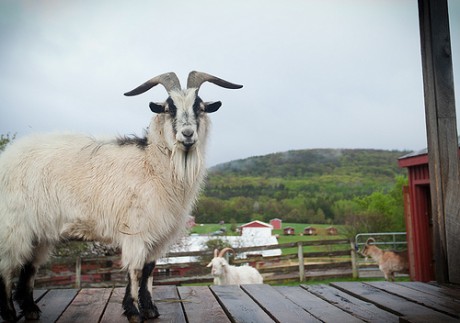 Piper Hoffman has her very own column on Our Hen House for good reason: she rocks at thinking critically, and eloquently conveying those thoughts. Consider her article below, featured on this week’s edition of #ThrowbackThursday. Piper ruminates on the ethical arguments that give veganism a bad name, effectively refuting each of them. An ever-valuable piece.

This article originally appeared on Our Hen House on February 25, 2013. If you’d like to see a certain OHH article resurrected, email us at info [at] ourhenhouse [dot] org.

A vegan diet results in more animal deaths than an omnivorous one.

That is the ludicrous conclusion of a 2003 paper by Steven Davis published in the Journal of Agricultural and Environmental Ethics. A professor of animal science at Oregon State University, Davis based his argument on the theory that modern crop harvesting kills more animals than eating cows who grazed on pasture.

The animals who die for plant crops include mice, moles, rabbits, “and other creatures that are run over by tractors, or lose their habitat to make way for farming,” Davis contended.

This is just one of the many arguments that have been leveled against ethical veganism. Distinct from veganism motivated by health or environmental reasons, ethical veganism is premised on the belief that it is wrong to cause animals suffering and to take their lives. In this column, I want to review and refute two ethical arguments against veganism.

Davis argued that veganism causes the deaths of more animals than some kinds of meat eating because of the animals killed for crop land and during harvesting. Vegans should reduce their consumption of plants and eat more cows who grazed on pasture, he asserted; cows provide lots of protein and calories per head, and would therefore cause the deaths of fewer animals than plant harvesting does.

Unfortunately for Davis, his argument was based on thin air, because he didn’t know how many animals die to grow and harvest plants. “[A]ccurate numbers aren’t available comparing the number of animals of the field that are killed with these different cropping systems,” admits the author of the blog Let Them Eat Meat.

That isn’t the only problem with Davis’s paper, as others have observed. Animal Visuals summarized the two primary critiques (and offered a cool infographic disproving Davis’s thesis):

Many vegetarians made their objections directly to Davis, but as he told ABC News, even though they often disagreed with him, most of the emails he received were “quite decent” because vegetarians tend to be well-educated, sensitive, and thoughtful folks.

I have no point to make about that last paragraph; I just couldn’t resist sharing it.

The New York Times held an essay contest inviting readers “to make an argument” that eating meat is ethical. Winner Jay Bost began with the premise that “ethical” should be “defined as living in the most ecologically benign way.” The premise of ethical veganism, however, is that we should cause the least suffering possible (the utilitarian theory), or that we should not violate the rights other sentient beings have to their own lives (the rights theory). From the beginning, Bost is talking past ethical vegans by defining “ethical” differently.

Bost concludes that a meat eater must do three things to be ethical:

First, you accept the biological reality that death begets life on this planet and that all life (including us!) is really just solar energy temporarily stored in an impermanent form. Second, you combine this realization with that cherished human trait of compassion and choose ethically raised food, vegetable, grain and/or meat. And third, you give thanks.

His second requirement is appealing: ethical vegans are pretty much all about compassion, but, ultimately, it begs the question he is setting out to answer: Is there such a thing as ethically raised meat? And numbers one and three are awfully lame. We’re all solar energy? That could be used to justify anything. If we’re all (including us!) just solar energy, why not kill and eat ethically raised humans? Or eat the corpses of humans who die of natural causes? There are reasons for the taboos on cannibalism, such as the recognition of people’s inherent right to life and dignity. Ethical vegans argue that drawing a distinction between human animals, who get to keep this right, and non-human animals, who don’t, is not justifiable.

And then we have giving thanks. A nice sentiment, but it doesn’t help the cows slaughtered just a fraction into their life span. And who are we supposed to give thanks to, anyway? Let’s not drag God into this, or the debate will just get uglier. So are we thanking the spirit of the murdered animal? If such a thing exists, I imagine it snorting in indifference at this useless token that serves mostly (if not entirely) to salve the guilt of meat eaters.

The Beauty of Ethical Objections to Veganism

Sure, I don’t agree with critics of my beliefs. But I am thrilled that they are out there making their case, because they wouldn’t bother if they weren’t taking ethical veganism seriously. As Gandhi has often been attributed with saying, “First they ignore you, then they laugh at you, then they fight you, then you win.” Davis and Bost are proof that ethical vegans are that much closer to winning. Besides, fighting is a lot more fun than being ignored and laughed at ever was.