Book Review: Zooburbia: Meditations on the Wild Animals Among Us by Tai Moses 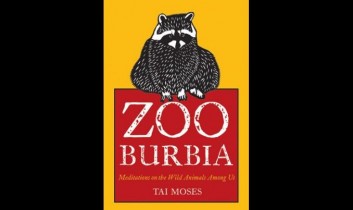 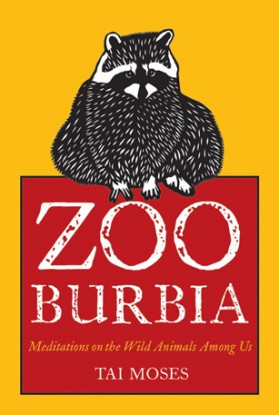 If I’m reincarnated as a squirrel or a spider – perhaps even a mole – I’m hoping that I’m reborn at Tai Moses’ house. In her book Zooburbia: Meditations on the Wild Animals Among Us (Parallax Press, 2014), Moses takes us on a journey through “the extraordinary, unruly, half-wild realm where human and animal lives overlap.” She writes of the animals we live with everyday in the suburbs and cities. Even as we encroach upon their habitats with pavement and pesticides, few of us fight for them or even give them a moment’s thought. In Moses’ backyard in Oakland, California, however, these animals have found a home, and in her compassionate consciousness they flourish in a safe haven.

In over thirty beautifully written, thoughtful essays, Moses reflects on the wonder and abundance of urban wildlife, in the process providing meaningful lessons about even the smallest of creatures, who too often go unnoticed. Did you know that ants till the soil, pollinate plants, and disperse seeds? That pigeons were the first birds to be domesticated, six-thousand years ago in the Mediterranean? That moles – the scourge of manicured lawns – aerate the soil by digging tunnels, circulating oxygen and nutrients for plants? Tai Moses writes with imagination, humor, and emotion. She brings to the book her longtime work as a journalist and editor, as well as her experiences in an unusual variety of jobs: veterinary assistant, motel maid, trimmer at a salmon cannery, and animal trainer’s apprentice, to name just a few. Through it all, she has been an intrepid explorer of spiritual living as it relates to animals.

Two essays in Zooburbia held particular appeal for me. In “Up at Night,” Moses raises the prickly issue of animals preying on other animals. This comes up all the time from folks who challenge animal advocates and their quest to end cruelty: “What about cruelty in the animal world? What about lions and tigers that prey on defenseless antelope?” Moses doesn’t offer a simple answer, but I appreciate her observation that life for suburban and city creatures alike can be as harsh as life on the African plain. Eggs get eaten, hawks devour small mammals, raccoons steal innocent nestlings. What can we do except try to minimize the harm we humans cause, while acknowledging that we all share life’s “inexhaustible amounts of heartbreak and happiness, innocence and guilt, tranquility and chaos.”

Another essay, entitled “How to Make a Forest,” is a call to activism. In the face of climate change and widespread habitat loss for many species, gardening becomes an ethical act – an imperative to counter the Cargills, Monsantos, and Exxons of the world. Moses points out that collectively, the patchwork mosaic of our backyards, terraces, rooftop gardens, vacant lots, and median strips adds up to a surprising amount of habitat. “If you plant a tub of milkweed on your little apartment terrace and a monarch butterfly finds it and lays her eggs, you have just lodged a protest against the forces that would cover our world with concrete; that would fill our rivers and streams with chemicals; that would lay waste to our forests and cut the tops off our mountains.”

Zooburbia has already impacted how I view the creatures in my own world. Yesterday, I found a small green worm who had latched onto a curtain in my bedroom. My instinct was to remove the worm, possibly killing or injuring him in the process, but I decided to wait and see what happened – perhaps the worm would crawl away or drop off on his own. This morning, the worm was still there, somewhat miraculously clothed in a puffy, white cocoon, no bigger than the end of a Q-tip.

In many ways, Zooburbia is a reflection of Tai Moses’ spiritual quest. She finds that “[t]aking care of this little remnant of urban habitat gives me a deep sense of well-being and stability. Sometimes what makes us happy is so different from what we imagined would make us happy that we don’t even recognize it at first.” I thought about this for a while and decided that the cocoon stays, as I wait for whatever transformation occurs – for the worm and perhaps for me.