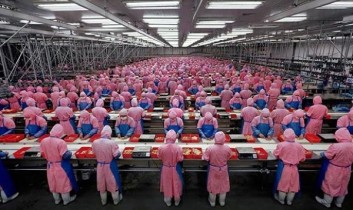 Considering that we strive to cultivate an indefatigably positive spirit in our animal activism, we’re huge fans of endeavors that give us hope for the future of veganism and animal rights. This piece by Kevin Schneider discusses some of these very endeavors that continue to nurture our activist spirits a year after the piece’s original publication, which is exactly why we’re thrilled to resurrect it for #ThrowbackThursday.

This article originally appeared on Our Hen House on June 7, 2013. If you’d like to see a certain OHH article resurrected, email us at info [at] ourhenhouse [dot] org.

Kevin Schneider is back, this time to discuss the future of meat.

Henry Ford, the brilliant American industrialist, is famously quoted as saying, “History is bunk.” Ironically enough, Ford’s own contribution to modern commerce – the assembly line – might soon itself be, well, bunk. While the assembly line has made possible great strides in material wealth and welfare, new technologies like additive manufacturing have the potential to radically change the way we organize labor and produce goods. In addition to unlocking human creativity by moving us away from a one-size-fits-all method of production, the end of the assembly line could be the best news yet for the planet’s non-human inhabitants. 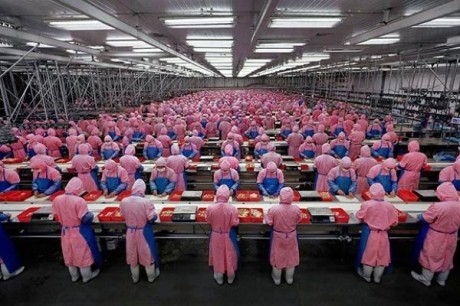 Where animals suffer in this world, money is often not too far behind. Arguably, the greatest amount of animal suffering is concentrated in the agriculture industry, which globally makes trillions of dollars by killing trillions of animals. The assembly line itself represents a kind of violence, its cold calculation encapsulated by production quotas and the endless repetitive drone. When applied to farmed animals, the assembly line hits truly brutal efficiency. Farmed animals are caught in a system that literally traps them from the moment of conception to the moment of death. And while undercover investigations regularly reveal horrific, senseless violence toward farmed animals, documentary films like Samsara show us that simply existing in the cogs of the machine can be just as devastating to animals as visceral violence, and far more prevalent.

It’s not just animals who suffer on the assembly line. As the appetite for flesh remains high and the concentration of animals in single factories continues to grow, humans are increasingly getting ground up as well. Under new USDA rules proposed by the Obama administration, the maximum slaughter rate for chickens will rise from 140 birds per minute to 175 birds per minute. At that speed, slaughterhouse employees won’t have time to remove visibly dirty carcasses, even those soiled with feces, and so the rules require every carcass to be gassed with harsh decontaminants, regardless of how soiled or contaminated they may be. Even at the pace of 140 birds per minute, workers routinely suffer from carpal tunnel syndrome and other musculoskeletal disorders, and with the increased use of ammonia and other potent antibacterial agents, workers and inspectors are complaining of a variety of respiratory and other ailments. There are even allegations that workers have already died as a direct result of exposure to these chemicals. While some animal activists may think that worker safety is not their concern, this attitude is wrong. Factory farming is an oppressive system, to humans and animals alike, and we don’t do either any good by ignoring the harm caused to any and all of the individuals caught up in it. Rather, our energy is far better spent recognizing all of the manifestations of brutality that it represents, and using this understanding in our fight to replace it completely.

Fortunately for humans and animals alike, emerging technologies will one day make it possible to completely do away with the assembly line of death. Cultured meat (meat that is grown from a cell culture instead of being the flesh of an actual animal) is a huge step toward replacing animals in food production, thereby sparing animals the horrors of existing in that space, as well as freeing up people to do more productive things with their time than kill and eviscerate animals. One company, Modern Meadow, is working on combining cultured meat with 3-D printing to one day be able to “bio-print” meat. Just imagine: In the future it will be possible to walk down to the corner “butcher,” select from a menu of available meat options, and then have that meat “printed” for you on the spot. While some will still choose to abstain, many others will make cultured meat a part of their diet. And the great thing is, every purchase of cultured meat will reduce the total number of animals killed for food: According to the nonprofit research group New Harvest, researchers are getting closer and closer to making the entire process animal-free.

The idea of replacing animals in our food is already upon us, as major food companies have signed on to replace eggs in some of their products with Hampton Creek Foods’ completely plant-based product, Beyond Eggs (don’t miss CEO Josh Tetrick on the Our Hen House podcast). Of course, a revolutionary new technology like cultured meat will take some time to generate “stomach share” among consumers, and many people will be completely freaked out by it. Likely, the adoption of this technology will largely be an intergenerational shift, with our children and theirs eventually becoming completely normalized to cultured meat. And while there may always be some small-scale animal-raising and hunting going on, I believe the masses will continue as they do now – that is, consuming the cheapest, tastiest, most convenient food available. There’s absolutely no reason we can’t get all these qualities from non-animal sources, and cultured-meat technology (along with innovative plant-based products like Beyond Eggs) offers just such an opportunity.

People once said that the Model T would flop, but it changed the world. Maybe the “Model T-Bone” can do the same thing, for us and the animals. 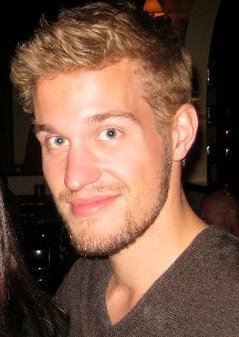 Kevin Schneider is a graduate of the Florida State University College of Law, where he specialized in environmental law. Kevin has worked for a number of nonprofit animal protection groups over the years, in both a legal and non-legal capacity. An ethically and environmentally conscious consumer himself, Kevin hopes to use his law degree to grow and empower plant-based businesses, with the ultimate goal being to improve human health, protect the environment, and advance the cause of animal rights. Currently a Florida resident, Kevin is moving to New York City after the bar exam.