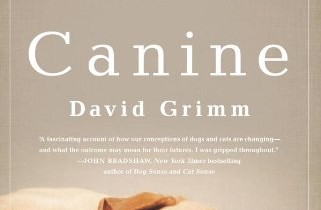 The incredible Kevin Schneider joins us once again, this time to offer his analysis of scientist David Grimm’s new book “Citizen Canine: Our Evolving Relationship with Cats and Dogs” from an animal rights perspective. As Kevin notes, with laudable campaigns working to achieve the status of legal personhood  for non-human animals, the issues discussed in this book prove particularly relevant. Take it away, Kevin! 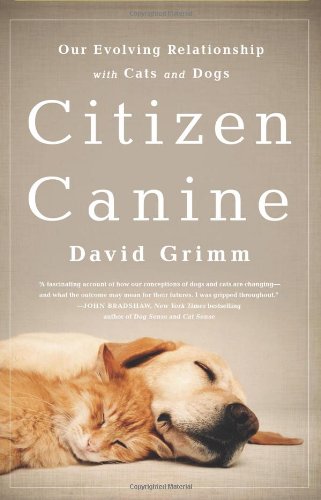 With Hobby Lobby and Citizen’s United still ringing in our collective ears, the topic of “legal personhood” is a hot one. And corporations aren’t the only ones chasing down rights: cats and dogs are inching closer to becoming “persons” in the eyes of the law. With his new book Citizen Canine: Our Evolving Relationship with Cats and Dogs (PublicAffairs, 2014), renowned science author David Grimm weaves fascinating breakthroughs in genetics and behavioral science with stories of real dogs and cats—real persons—doing great things. The anecdotes are entertaining, but it’s Grimm’s incisive analysis that makes the book a must-read. Whatever the shape animal rights may take in the years to come, Canine makes the case for practical rights for cats and dogs right now.

Canine paints a thrilling portrait of kitties and puppies from their wild prehistoric roots all the way to their present seat at the throne of our hearts. Although we adore them for their quirks and personality today, once upon a time they were just plain useful for surviving an inhospitable world. Without cats to hunt down disease-carrying rodents in humanity’s first pantry in the Mesopotamia, it’s hard to imagine civilization ever getting off the ground.  Indeed, when we scorned the feline, the universe swiped back: millions of cats were massacred in the early thirteenth century after the paranoid Pope Gregory IX declared them satanic. The resulting rat proliferation helped bring on the Black Plague, which ultimately wiped out 60 percent of Europe’s human population.

Today, numbers alone speak to the influence of cats and dogs.  Guardianship has quadrupled since the 1960s; there are now about 70 million dogs and 80 million cats in the US. We spent $56 billion on our “pets” in 2012, a number greater than the GDP of half the countries on the planet. Even with all they have going for them, they’re not resting on their laurels: cats and dogs are doing seriously valuable work in the modern economy. Cats are being prescribed for people with PTSD, dogs are sniffing out cancers and alerting patients to seizures before they happen.

Grimm recounts how a visit to the vet with his ailing cat was a watershed moment in his thinking about animal rights. Indeed, it’s in that scene that the true depth of our relationship with our nonhumans shines through. A full ninety percent of people polled consider cats and dogs part of the family. Little surprise then that most agree they deserve at least some basic legal rights.

Even with support for rights, however, there is confusion about what “animal rights” means, particularly in practice.  Grimm does an admirable job presenting both sides of the “rights vs. welfare” discussion. And while that debate is sure to continue in the ivory towers for years to come, the revolution on the ground has already begun. Companion cats and dogs (among other nonhuman animals), for example, can now be legal beneficiaries of trust funds. This may not seem like much, but the implications are striking. Already, the Nonhuman Rights Project is using a trust fund as part of its case to win freedom for four chimpanzees in New York State.

Make no mistake—personhood won’t come without a fight. Veterinarians, led by their lobbying arm the American Veterinary Medical Association (AVMA), are among the chief opponents. Putting abstract legal concepts aside, it boils down to this: the same vet who’ll charge $10,000 to operate on your cat or dog will turn around and argue that her life is worth a mere fraction of that sum if he kills her with his negligence. Grimm hits the hypocritical nail on the head here: vets can’t stoke our love for animals with one hand and wage war on personhood with the other.

At the same time, Grimm reminds us that veterinarians care deeply for animals, and that it would be against their best interests to alienate them. This is where good old-fashioned compromise comes in. If we work at it, we can do justice to cats and dogs and protect their doctors at the same time.  An expanded insurance system—financed, in part, by the labor of cats and dogs themselves—could go a long way towards fashioning a reasonably agreeable cushion for veterinarians.

Of all the fascinating observations Grimm makes, my favorite was this: sacrifice is a bridge to citizenship. Cats and dogs “give up” their wildness for us; their reproductive freedom, too, in many cases. In war, they give their lives for us, and we’re starting to pay them back. A federal bill giving military dogs healthcare for life almost reclassified veteran military dogs as “persons” in certain aspects of the law. Even though the personhood language was removed at the last minute (military dogs are still classified as “property”), it’s telling that, even in our deeply fractured politics, cat- and dog-friendly bills almost always carry universal support. This should give us hope.

Is it fair that cats and dogs enjoy so much while countless other beings suffer?  There’s no simple answer. But there’s also no reason we shouldn’t pursue practical reforms for cats and dogs now, while we continue to pursue justice for all animals over the long-term. As Grimm puts it, the very act of crafting policies that respect the lives of beings other than ourselves “broadens the set of beings we have to show respect for, and that is a civilizing process.”  I think we can agree that every being—including us—could benefit from that. 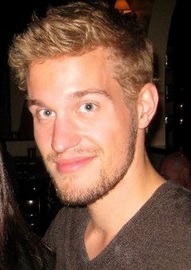