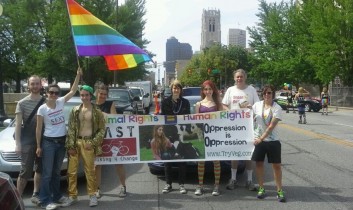 Today we welcome back John Jungenberg, an activist whose passion for both animal and LGBTQ rights led him and a group of activist friends on a journey across the Midwest to promote veganism at Pride Parades. John’s first piece recounted his experiences in Wisconsin, and now he takes us into Indiana for Circle City Pride – vegan style!

Our road trip to Indianapolis got off to a slow start. We were stuck in the legendary traffic hell of Chicago and arrived an hour-and-a-half late to the train station to pick up our friends Rachel and Alex, who were carpooling with us. Thankfully, once we crossed into Indiana, we sped up, and soon enough we were racing through the cornfields towards the Indianapolis KOA, where we would camp for the night. 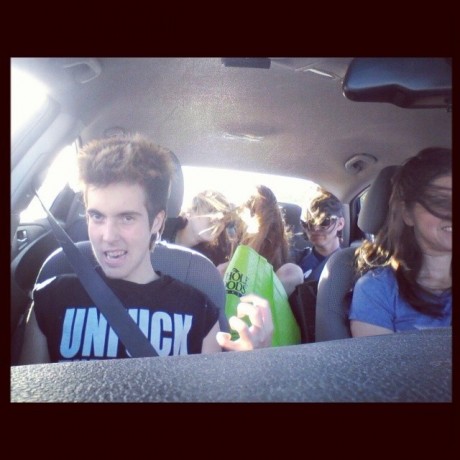 We arrived at the campground at midnight, set up the tent, and got a nice five hours of sleep on rocky ground.

At 7:00 a.m., we packed up our camping gear and headed into downtown Indianapolis for the Circle City Cadillac Barbie Pride Parade. Once on the outskirts of the parade route, we followed a steady stream of people dressed in rainbows to the start of the parade lineup. There, we met up with volunteers Mark, Kearney, and Sam – super activists from Indianapolis! Within the first minute or two of walking in the parade, we realized how truly huge this event was; official estimates of 40,000 incredibly energetic people in attendance seemed totally accurate!

Just like when we walked in the Milwaukee Pride Parade, our banner – “Animal Rights = Human Rights” – brought people to their feet to cheer! With the help of the volunteer crew from Indianapolis, we reached a whopping 2,372 people with our specially designed leaflets that highlight the connection between LGBTQ rights and animal rights. 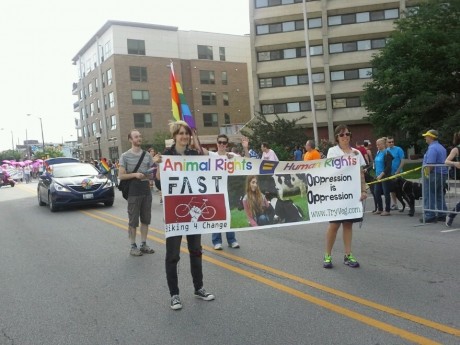 After the parade, we went to the Circle City Pride Festival, where members of the Indiana Animal Rights Alliance were leafleting and showing videos of factory farm footage to festival attendees. We leafleted with the IARA before hitting the road to return to Chicago. We were sad to leave, but we felt wonderful knowing that we had met new friends and helped reach so many people with the message of compassion for all. During my travels for animal rights so far, I’ve seen incredible vegan communities in areas where I didn’t think they’d be – and they are growing every day! 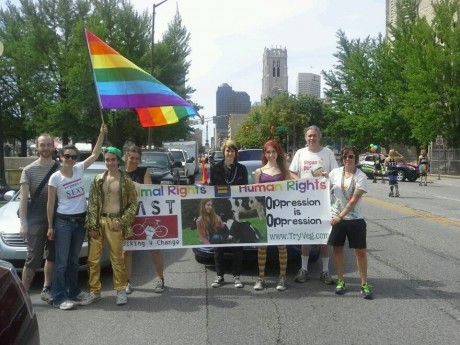 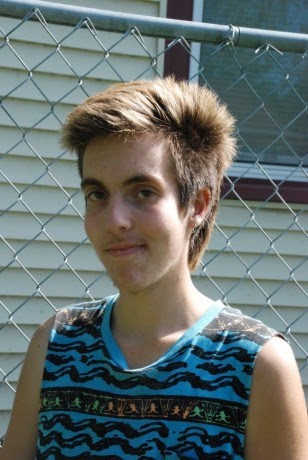 John Jungenburg was raised vegetarian, but after learning about the cruelty in the dairy and egg industries four-and-a-half years ago, he went vegan and got involved in animal advocacy. John has attended dozens of protests, and has handed out over 40,000 Vegan Outreach leaflets. He also co-founded Family of Activists Standing Together (FAST). FAST completed a number of cycling tours to raise awareness about animal rights, and is now focused on educational events. In his spare time, John likes to read, relax in nature, hang out with friends, and play with his four cat companions.