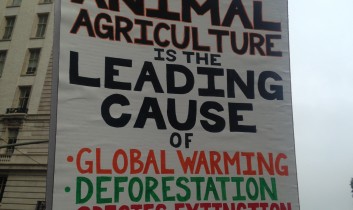 Did you hear about that small get-together that happened in NYC recently? You know, the one where all those folks got together and marched for something about the planet getting hotter? Well, apparently plenty of vegans are concerned about this… “climate change,” I think it’s called?… and, today, one of our favorite novelists — Robin Lamont — is filling us in on how some vegans chose to participate in the march. Wait… animal agriculture is one of the top contributors to climate change?! Wow, we should really look into this further after reading Robin’s article… 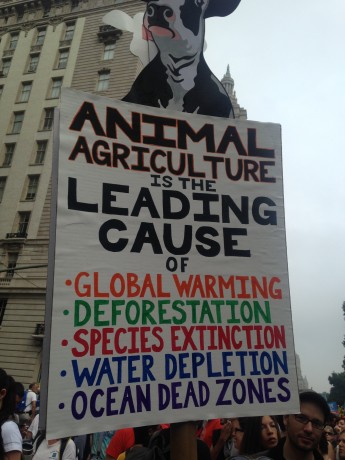 8:37am – My daughter and I step onto the Metro North train into New York City to attend the People’s Climate March, which is to start at 11:30am. The train is full and more people get on at each station until it is standing-room only. The marchers are recognizable by their footwear (comfortable shoes), handmade signs, and their palpable anticipation. Our car is abuzz with camaraderie. “Where are you from? And you came all the way from Minnesota for the march?”

9:05am – A man wearing a Sierra Club t-shirt is winding his way down the aisle getting signatures for the organization’s petition to keep hydro-fracking out of New York. And because I saw Cowspiracy, I agree to sign – it’s an opportunity to have a discussion about why the Sierra Club is silent on the huge role animal agriculture plays in environmental degradation. 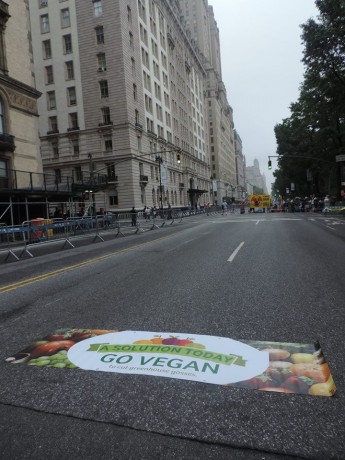 The petitioner knows what I’m talking about because he goes into a prepared speech about how the environmental issues taken on by The Sierra Club must come from the members themselves. I ask, “How about the club’s leadership? Surely they know that animal agriculture is the leading cause of CO2 emissions, deforestation, and water pollution. So shouldn’t they be educating the members of an environmental organization – and then trying to do something about it?” He mumbles in response and pushes his way further down the car. But the eight or ten people around us have heard the exchange. I adjust my vegan t-shirt and sit back to enjoy the rest of the ride.

10:15am – We exit the packed subway and join the surge toward the park. We are heading for 72nd Street – the meeting place for Vegans at the Peoples’ Climate Change March. Allison Memmo Geiger has been working for weeks on Facebook to set this up. She has been at the meeting place long before the rest of us arrive. 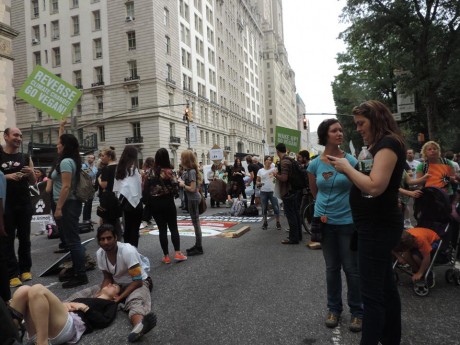 10:40am – The vegan meeting spot is beginning to get active.

As the morning wears on, I see more and more familiar faces. Vegan friends from PCRM, Healthy Planet, A Well-Fed World, Mercy for Animals, Lantern Books, Woodstock Farm Animal Sanctuary, and never mind Leonard DiCaprio and Mark Ruffalo! I even spot the guys behind Cowspiracy! 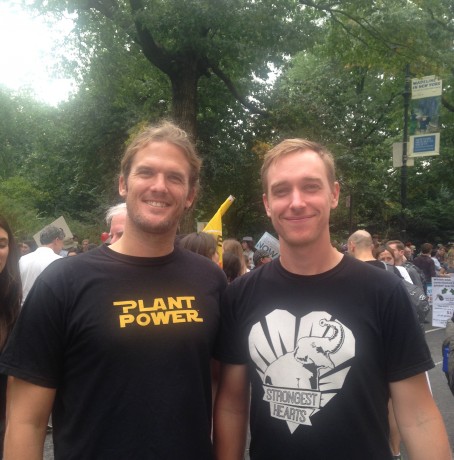 The signs and banners come out. Nonviolence United is giving away fantastic t-shirts that everyone is slipping over the other vegan t-shirts they wore to the march. We are all trying to spread the word that animal agriculture is destroying our planet.

12:00pm – The march was to have started a half hour ago, but we have yet to move. Another half hour goes by and we hear rumors that the march did indeed start on time. Still, spirits are high and become even higher when The Cow arrives. 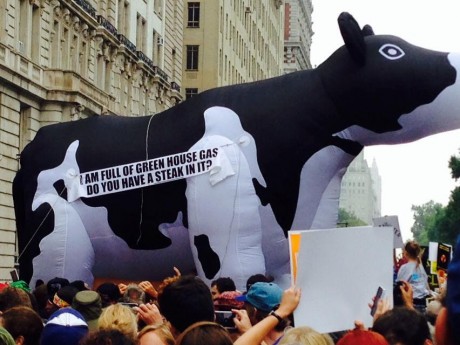 She is an instant celebrity. Hey there, Bill McKibben at the front of the line – eat your heart out! Everyone turns to take photos. The Cow has magically appeared, stumbling a bit at first, but then, head held high, she takes her rightful place in the vegan contingent. We are thrilled to be marching with her.

1:00pm – We are moving! Well, at first, not so much moving as being compressed from the rear. No panic – there are far worse things than being compressed by fellow vegans. And then, we are truly marching. At a snail’s pace to be sure, but steps are being made. 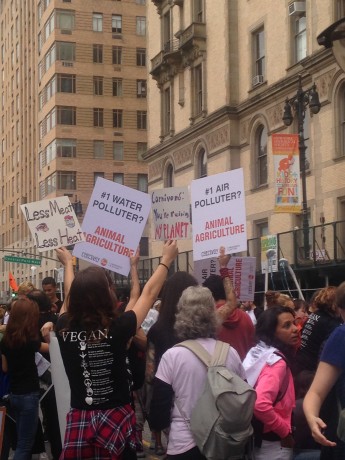 With every half-block, The Cow falls behind a little more, but we are not disheartened. She is still within sight.

1:30pm – We are just passing 69th Street. Three blocks in 30 minutes. I calculate that we will arrive at our final destination on 34th Street at around two in the morning (but math has never been my strong point).

There are a few police officers standing in a knot to our right. One marcher yells over, “Do you know how much water it takes to produce a pound of hamburger?” The lone female cop smiles and shakes her head. “Twenty-five hundred gallons!” The cop widens her eyes and exclaims, “Really?” A bunch of us assure her that it’s true. She turns to her fellow officers and asks, “Did you know that?” They did not. We march on.

A family memorial service keeps my daughter and me from making it to the finish line. But there are straggling marchers with us on the subway to Brooklyn and their presence is comforting. 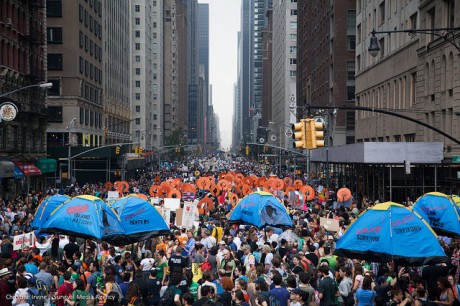 The next morning I see that the March organizers estimate that there were 400,000 of us in New York City alone. More in London, Berlin, Bogota, Paris, New Delhi, and Melbourne.

It will be a grand day when all “environmentalists” understand the connection between animal agriculture and the destruction of our planet. Seeing the commitment and passion of the vegan community on Sunday tells me we are one step closer.

Robin Lamont’s most recent novel is The Chain, the first in a suspense series featuring an animal rights investigator. Prior to becoming a writer, she worked as an actress, an undercover investigator, and an Assistant District Attorney in Westchester County (in that order). She now writes full time and volunteers for animal advocacy groups. Visit Robin’s website and Facebook page to learn more.