Excerpt from the Book, “Off The Reservation” — and a Bonus Flock Giveaway! 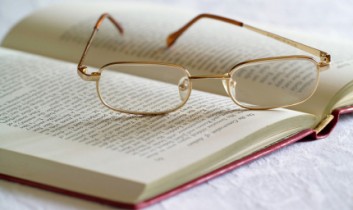 At Our Hen House, we do our best to bring you the latest from the world of animal rights. That said, when it comes to telling you about books, there are just so many amazing new ones covering all kinds of animal issues, and we simply don’t have time to review them all (but don’t miss the ones we have reviewed). That’s why we thought long and hard and decided to start an exciting new program for you. From time to time, we’ll publish excerpts of the author’s choice — highlighting the best in new animal rights books (both fiction and non) — right here on our online magazine. We hope you dig this new service!

One general note about OHH’s new intention to publish excerpts: We do our best to choose excerpts from books that reflect our values to change the world for animals, and to end their exploitation altogether. However, we are not able to read all of these books in their entirety, and so please note that the books we choose do indeed intrigue us, but might not fully be in line with our ethos — though we hope they are. In other words, vet these for yourselves, and feel free to share your thoughts with us at by emailing info [at] ourhenhouse [dot] org.

We began this program just this past Wednesday with an excerpt from Saving Baby. In light of the holiday season — we thought we’d gift you an additional excerpt this week (plus a giveaway for a lucky flock member). Who doesn’t need another gift idea, right? Plus, if you’re like us, you are in dire need of sitting down with a good book and taking a load off. So, happy reading…

Today we bring you an excerpt from the new novel (hooray for fiction that speaks up for animals!), Off the Reservation by Glen Merzer. And flock members should read on past this excerpt for your chance to win a copy of this book! (Not a flock member yet? ‘Tis the season!)

Glen is an author, playwright, and screenwriter. His first novel (but millionth book), Off the Reservation — published by Vivid Thoughts Press (Dec., 2014) — is a comic narrative about a quirky vegan congressman who undertakes an unconventional quest for the presidency. 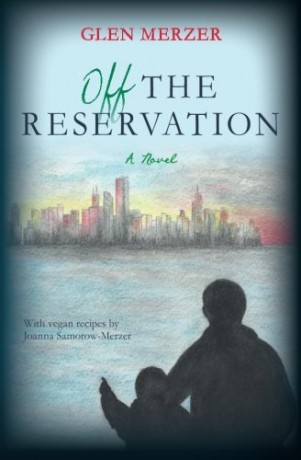 Congressman Evan Gorgoni, a vegan congressman from Indiana, has announced his candidacy for the presidency, but has decided to run without any prepared speeches or canned slogans.  At a major political event in Iowa, leading up to the Iowa caucuses, he takes the stage without knowing what he will say.

Excerpt from Off the Reservation

Gorgoni felt himself buoyed by the applause as he strode over to the podium and gave Leader Paley a handshake and a peck on the cheek. He felt light on his feet, as if he had just had three or four beers. It was a kick to have so many people giving him their utmost attention. He waved a couple of times, bowed his head slightly, and waited for silence. It took a while to come, and when it came, he let it last for an unusually long period of time, as he considered what to say. The crowd was entirely still, as he was, and then there came a kind of collective sigh, a susurration tinged with laughter, and then there was stillness again. He saw the audience at first as a single, giant mass, and then he allowed himself to focus on a single table, not far from the stage, where Caroline and his daughters and Monty sat. He couldn’t help but smile when he saw Monty lower his head.

“Thank you, Iowa. Caucus is a Native American term. It means a meeting of tribal leaders. And I say to you, tribal leaders, let’s be realistic. There ain’t no shining city on a hill.” He heard some stirring in the crowd, and a few hands clapping. “There’s just the decaying cities we’ve got and their roads that need to be paved and bridges that need to be maintained. How about if we simply try to do our best? Without the grandiose promises. How about if for once we confront our challenges with a grounding in the truth? Can we trust the Republicans or even the Democrats? Probably not. Can we bridge our differences and begin a more civilized discourse? Probably not. Can we at least agree as a society to put our children first, to create an educational system second to none, so all our children can meet their potential? Probably not. Can we create a health care system that is affordable and efficient and humane? Probably not. Can we construct a nationwide network of bullet trains? Probably not.”

And now a chant rose from the crowd, tentatively at first, beginning in the back of the hall and working its way forward.

Gorgoni went on. “Can we stop the fearsome onslaught of climate change, the melting of the glaciers and the droughts and floods and storms brought on by more energy in the atmosphere? Probably not.”

“Can we put an end to our dangerous dependence on fossil fuels that threatens the planet and enriches unstable regimes?”

“Probably not!” The answer echoed in the hall.

“Probably not! Probably not!” roared the crowd. Gorgoni gazed across the hall, and saw a sea of smiles and nodding heads and waving arms and some people even jumping up and down with something like relief.

He imbibed the energy of the crowd and pressed on, his cadence rhythmic, his volume rising, the whole force of his being merging with his audience. The microphone had become redundant.

There was silence in the hall.

“Do we have to try, anyway? That’s the question. Thank you, Iowa!”

FLOCK MEMBERS, READ ON FOR YOUR CHANCE TO WIN A COPY OF THIS NOVEL! (NOT A FLOCK MEMBER YET? ‘TIS THE SEASON TO KEEP VEGAN INDIE MEDIA ALIVE!)