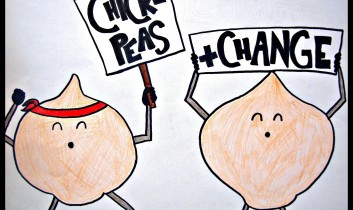 Greetings, OHH! We’re thrilled that our intern-turned-Media-Coordinator, the vibrant Alessandra Seiter (whom you have gotten to know from her charming OHH podcast reviews), is expanding her personal blog, and growing it in new directions. Alessandra is a tremendously talented writer and refreshing visionary — with some strong opinions and areas of interest that go well beyond the scope of Our Hen House — and we truly couldn’t be happier about Chickpeas & Change. We invited Alessandra to tell you about this latest project, and if it catches your interest we suggest you subscribe. BTW: She’s also a masterful cook, and much like her former blog, this one promises some outstanding recipes. 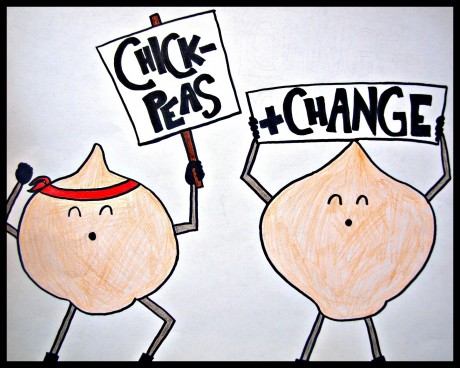 Hello, Our Hen House readers! Media Coordinator Alessandra Seiter, here, engaging in some shameless self-promotion. Perhaps ya’ll have heard about my humble blogging endeavor, formerly known as Farmers Market Vegan? Well, that project has recently changed directions, meriting a brand-spankin’ new design, logo, and name. So, it would be my honor if you would help me to welcome the all-new Chickpeas & Change to the blogosphere!

About a month ago, I expressed the desire to re-frame my blog – formerly known as “Farmers Market Vegan” – with a new name and manifesto that focused on radical politics grounded in anti-speciesist, anti-racist, and feminist principles. With the help of my readers, I decided to celebrate the blog’s new direction under Chickpeas & Change, where I hope to play a small part in feeding a revolution toward collective liberation for all beings.

For five years starting in my junior year of high school, my identity revolved around veganism and working toward the liberation of other animals. And for good reason: not only did the violence of species-based oppression provide me with my first “social justice awakening,” so to speak, but the intention behind a vegan diet quite literally saved my life from a ravaging eating disorder.

With veganism and animal activism most commonly framed as a consumer boycott of goods that depend upon the commodification of the bodies of other animals, I understood the goal of my veganism as merely replacing animal-based production with a vegan market. However, I came to feel that this goal operates well within the present political-economic order of capitalism, which by definition seeks to commodify anything and everything it can get its hands on – living or inanimate. For me, I found that by focusing on the vegan consumer side of the equation, my animal activism was playing right into the speciesist idea that “human beings are superior to all of the other beings on earth, and that this superiority grants us a natural right to make use of the other beings however we like.” Sure, I practiced vegan consumption habits, but I definitely wasn’t challenging the internalized superiority that I believed I as a human held over other animals (aka speciesism). (Read more about the connections I see between veganism & consumerism.)

Of course, if I couldn’t recognize my own intellectual arrogance in regards to other animals, I certainly couldn’t recognize how that same arrogance rendered me complicit in the oppressive relationships between colonizers and colonized (colonialism), Westerners and “traditional” societies (imperialism), owners and consumers (capitalism), and the like.

After this wake-up call – instigated thanks to the groundbreaking work of feminist, anti-racist, and anti-speciesist activists (many of whom are listed on my Resources page) – the reasons behind my veganism experienced a profound shift. Once a consumer boycott at the forefront of my politics, my veganism morphed into one among many attempts to question the default ideologies – in this case, speciesism – under which I’ve operated since childhood, and that infringe upon my ability to coexist with others. In other words, my veganism has become an extension of my efforts to foster a truly anti-speciesist politics – a means rather than an end.

Today, I conceptualize my broader politics as a never-ending practice of radical humility grounded in seeking an always imperfect understanding of interlocking oppressions, and guided most by feminist and anti-racist principles.

Of course, throughout this exhausting yet fulfilling work, I gotta eat. That’s where the chickpeas come in. So join me in building up the feminist, anti-racist, anti-speciesist community, fueled by plenty of sandwiches, smoothies, and ice cream. Welcome to Chickpeas & Change!