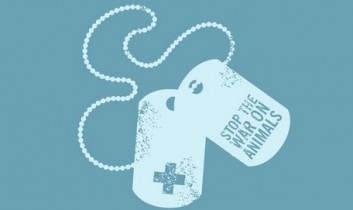 Waaaaay back in 2010 we featured this interview with Josh Hooten of the Herbivore Clothing Company; five years later and that man is still going strong (with more clever t-shirts than ever), along with his powerhouse activist of a wife Michelle Schwegmann. Reintroduce yourself to Josh’s work today on #ThrowbackThursday!

This article originally appeared on Our Hen House on June 15, 2010. If you’d like to see a certain OHH article resurrected, email us at info [at] ourhenhouse [dot] org.

Josh Hooten does so many great things for animals that you might think he is a vegan machine. He co-founded the Herbivore Clothing Company just 8 years ago (with his wife, Michelle Schwegmann), providing compassionate people around the world with 100% vegan clothes, books and other products. He also was one of the masterminds behind starting the Let Live Foundation in Portland, Oregon, which hosts one of the greatest annual conferences for animal advocates in the country. As if that isn’t enough, Josh embarked on a 600-mile bike ride from his home in Portland to Farm Sanctuary‘s shelter in Orland, California and wrote an awe-inspiring and very fun-to-read book about his journey, called 600 Miles to Goat. Our Hen House reviewed the book: it comes highly recommended. I posed Josh some questions and, throughout our dialogue, it became clear to me that even though we’ve never met in person, I feel like I’ve known this guy all my life. Something tells me you’ll feel the same. 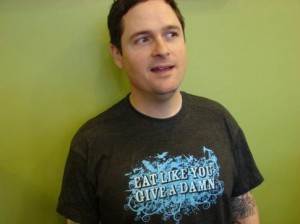 Our Hen House: The bike ride you chronicle in 600 Miles to Goat commemorated your 10th anniversary of veganism. When did you decide to become vegan and what was your journey to get there?

Josh Hooten: I went vegetarian in 1997 or so. A dog named George had come into my life and I became his main caregiver because my roommate was pretty incapacitated with depression issues. So I fell into the role of caring for him which took a lot of rearranging and responsibility taking on my part. I wasn’t in the best spot health-wise myself and I worked all the time either at my job or on other projects until late at night. Being put in the role of George’s caregiver made me get my act together, which wasn’t always easy. So one day I was sitting on the couch with George and I was thinking about how much effort I put into him and how much I cared for him and loved him, and while I was thinking these thoughts I was eating a chicken sandwich. I then started wondering why I cared so much about the animal next to me but didn’t care at all about the one on my plate. This nagged me for a bit and I decided to go vegetarian. I had a lot of vegetarian and vegan friends, having spent a lot of time in punk rock circles, so it was fairly easy to do.

A year later I moved to Chicago and I’m not sure why, but I started thinking about why I was vegetarian. I didn’t really know the issues, I just knew it felt right. Plus most of my friends were vegetarian and honestly, it was kind of embarrassing not being that way around them. Nobody lectured me or anything, it just always felt like they were doing something awesome and I wasn’t. So after a year of vegetarianism I wanted to find out about the issues and I bought Diet For A New America by John Robbins. Halfway through, I knew I had to go vegan if I was serious about being a compassionate person. I wasn’t pleased with this idea, I didn’t know any vegans and had no idea what I could and
couldn’t eat, outside of the obvious stuff. I bought a PETA cookbook and Animal Ingredients A to Z and some basic kitchen items to cook with. I really took it on. I wanted this choice to stick and I loved to eat way too much to go on the bagel and French fry diet my old Boston vegan friends were on.

People get to veganism in all kinds of different ways, but for me the suffering was what did it. And once I’d found out about it, there was no choice to go vegan, it was all there was. I just couldn’t support it anymore and whatever personal sacrifices I had to make would be nothing compared to what the animals have taken from them.

George died last Fall after 14 awesome years. We miss him terribly and I thank him for helping me find my way in life.

OHH: When you were younger, what was your relationship with animals and with food?

Josh: When I was younger I ate whatever was put in front of me. Pretty standard American diet, and I never really thought about it until my early teens when I got into punk rock. We had dogs growing up but I never really felt one way or another about animals. I certainly didn’t want them to suffer, but like a lot of people, I didn’t think much beyond my own wants and needs. It is interesting having a daughter. She knows more about her food and about animals at 5 years old than I did until I was well into my 20s.

OHH: In 600 Miles to Goat, you embark on this difficult journey alone, but you end up at the farm with your partner and daughter by your side. How do you balance your activism with your family? What have you told your daughter about veganism and animal issues? 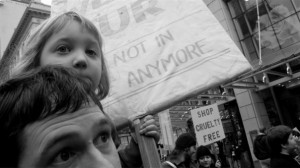 Josh: A lot of my activism is intertwined with my family life. Michelle and I both do a lot of outreach and AR activism, be it through the various events we help organize, or speaking events we do, or the occasional protest. Ruby is almost always there with us. She has protested at primate labs, the circus, fur stores, at Intel corporate headquarters over conflict minerals, and at anti-war marches. She likes the chanting and likes to hold her own signs. We share as much information as we think is appropriate depending on the situation, but we always tell her why we are there and what we are trying to do.

She “gets” veganism in such a simple and honest way. We’ve told her that it hurts the animals when we take their lives and bodies from them and when we take their milk and eggs. We tell her it hurts the same way it hurts when she falls and skins her knee. We tell her we wouldn’t hurt our dog so we won’t hurt any other animals. These are things you might tell a non-vegan adult and they might start coming up with all these reasons you’re wrong or why we should eat meat, and milk, and eggs. But to a 5 year old it makes complete sense in the simplest way possible. It hurts them. So we don’t do it. There is no way around it and to Ruby, no reason to try and find a way around it.

We spare her the horrible details but we are honest with her about suffering, and that the animals are killed, and that we don’t want to do that to them.

OHH: When did you start getting active to help farm animals? Have you advocated for any other causes that you’d care to mention?

Josh: We started Herbivore with the intent being we’d always have an outreach element to it, beyond the fact that everything we make is AR related. So from the very beginning we were putting literature into our orders we’d ship to people, and donating money to different groups. This was around 8 years ago.

I try and keep up with as many other issues as I can and we donate money and stuff we make to a variety of human rights and environmental projects. It can be tough to prioritize because I don’t feel like any one issue is more important than any other, but there are only so many hours in the day and so many resources, not to mention the emotional wear and tear of it all. But we do our best. We focus mainly on AR because I feel like it is the root of many other problems. I’ve always felt like vegans don’t start wars. So if we can make more vegans, other problems will start to go away because of that.

OHH: You raised almost $13,000 for Farm Sanctuary because of your bike ride. Who donated this money and how did you find them and inspire them to give?

Josh: We got donations from all over the place and a lot of blogs and websites were happy to help promote the ride as well. Spreading the word was pretty easy and getting support wasn’t hard either. I know if someone else had been doing this ride I would have tossed a few dollars in the hat. We have a pretty large email list of Herbivore customers we hit up and Michelle and I emailed everybody we knew. We were pretty shameless asking for money because it was for such a good cause.

As I trained for the ride I blogged about it a lot and I posted a lot of pictures I took from training rides. I think this helped people feel involved and helped them see how much was going into it. I tried to create some narrative and dramatic interest for folks by writing about my rides and so forth. It really felt like a team effort because I was getting so much support and so many well-wishes.

OHH: Do you have any advice for anyone reading this who wants to have their own adventure and help animals along the way?

Josh: Well, from a fundraising point of view, I’d say definitely blog about your preparations and post photos. Create a Facebook page and update it a lot. Get people hooked and excited. And ask for donations repeatedly. You don’t want to be a pest, but you want people to understand that whatever group you’re raising funds and awareness for is important and need help. Plus, people might want to donate but can’t the first time you ask, and the next time they might be able to and just needed the reminder. Start doing this at least a few weeks before the adventure actually begins to give time for word to spread. Find all the relevant news type blogs and email them asking for coverage. Also, be positive. People want to feel the triumph and excitement with you.

Get your copy of 600 Miles to Goat today.