A Preview of “The Trap” by Robin Lamont (Bonus Giveaway for the Flock!)

We’re sure that all of you darling flock members have enjoyed reading Robin Lamont’s novel, The Chain, which she so graciously shared with you in installments. (Did you catch her squawking about it on the OHH podcast and TV show? Get on that!)

Today, Robin reveals the first chapter of her newest novel, The Trap — the second book in The Kinship Series — to all of you lucky, ducky Our Hen House friends and fans.

As a bonus, OHH flock members can enter to win a copy of The Trap, so read on beyond this excerpt for that fabulousness. (Not yet a flock member? Become one today!) 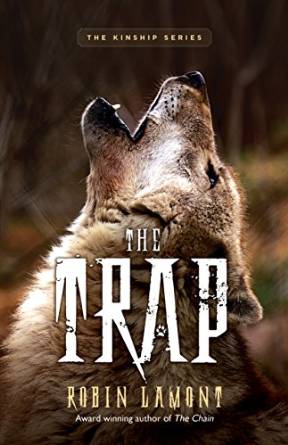 A note from Robin Lamont: The Trap was set in motion by a story told to me by Anja Heister of In Defense of Animals. She and her partner were cross-country skiing one day and spotted a marten hanging from a tree branch, caught in a brutal neck snare. They took the marten down and removed the wire snare. For a moment, they thought they were too late and that she was dead. But after a moment, the marten scrambled to her feet and ran to freedom, but not before she stopped and turned back to look at Anja – as if to say thank you. Some time later, Anja’s partner was threatened with prosecution for trap interference.

The hunting and trapping culture runs deep in the West. The Trap takes Jude Brannock undercover into that world, where she collides with a government agency that is methodically destroying the wildlife she is determined to protect.
I’m pleased to offer the first chapter here.

Charlie Ferrow whistled for his dogs. They should have been back by now. It was getting cold – the kind of cold you might not see coming until its knife edge was at your throat.

The late evening sky had gone from charcoal to black and seemed impossibly clear, stars shimmered brighter, sounds carried farther. The other hunters had gone home and it was just him and his “boys” huntin’ raccoons. Pelt prices were on the rise, nearly thirty dollars for a good size skin, and the meat brined and barbequed, wasn’t half bad. Best though was times like this, listening for the excited squall-bawl of his hounds catching the scent, then trailing and treeing a coon – the sweetest music he’d ever known. But now the tips of his ears were starting to burn. Time to pack it up.

Ferrow called again, and the veteran coonhound Grit bounded in from the trees. “Atta boy,” crooned the veteran hunter, reaching down to scratch Grit under the chin. “Where’s Jocko, eh? Where’s your brother?” Expecting the young ’un to appear any moment, Ferrow leaned his .22 against the back of his greasy, mud-splattered truck. The bumper sticker glowed pale green in the dark: I Got a New Coon Dog for My Wife – Best Trade I Ever Made. He tied off the garbage bag that held two dead raccoons and swung it onto the truck bed.

Just then, he heard Jocko, still deep in the woods. His urgent yelps cut through the crystal chill. Something wasn’t right, and Ferrow felt the hairs rise up on his neck. Grit heard it too and bolted off to investigate. Ferrow grabbed his rifle and went after him.

The headlamp fitted over his cap paved the way across the snow-crusted ground. As he got closer, he could hear the two of them. Winding his way through the trees and pushing aside low branches, Ferrow gripped his rifle tight, hoping Jocko hadn’t stumbled on a predator in a trap. The young coonhound wouldn’t have the sense to stay well clear of the slashing jaws of a cornered coyote or worse, a wolf.

About fifty yards in, the headlamp caught the darting figures of his dogs in a small hollow between two big lodgepole pines. They were anxiously circling a mound of snow at the base of one of the trees, their tails held high and stiff with warning.

What the hey? No coyote. Had to be a coon. Ferrow shined his light up into the tree where it would reflect the gleaming eyes of the cornered animal. He raised up the .22, ready to fire. But the sparse branches over his head revealed nothing. As he moved in to get a better look, his foot kicked something. He looked down and saw raw, bloated fingers reaching out of the snow.

Ferrow dropped to his knees and hurriedly uncovered the hand, then an arm clothed in stiff flannel. He brushed the snow from a face he recognized. The man’s eyes were open, ice crusted on his lashes and mustache, his skin waxy, the color of chalk, his mouth half open as if trying to scream. Very, very dead.

Heart pounding, Ferrow began to sweep the rest of the snow from the man’s body. What the fuck happened here? Suddenly, he cut his hand against something hard and sharp – the rusted tip of a wire spring. With the body now partially exposed, the glare of his lamp revealed a gruesome sight. Soaked in blood, the man’s lower leg was caught in the locked jaws of a coil spring trap. A big one, ten, twelve-inch jaws – a device that could have taken a bear or a hundred-twenty-pound wolf.

Holy Christ. Craig Eberhardt had stepped in his own trap.

Want more? Thought so. Get The Trap, by Robin Lamont.

Robin Lamont is an animal activist and writer, living in New York’s Hudson Valley. And she’s a regular contributor on Our Hen House. Learn more about Robin and The Kinship Series.

FLOCK MEMBERS, READ ON FOR YOUR CHANCE TO WIN YOUR OWN COPY OF THIS BOOK!

…NOT A FLOCK MEMBER YET? Join us, for the animals!…