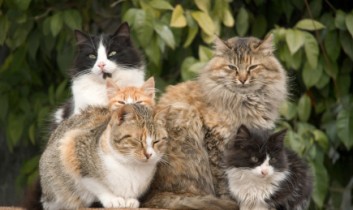 We’re sure that many of you can relate to the story of how Piper Hoffman became vegan — it all started with some cats. Celebrate the cat ladies in all of us with today’s #ThrowbackThursday article!

This article originally appeared on Our Hen House on December 8, 2012. If you’d like to see a certain OHH article resurrected, email us at info [at] ourhenhouse [dot] org.

Living in our society as a vegan and animal rights advocate presents countless challenges. One of the biggest is that to combat the horrifying and seemingly endless animal exploitation around us, we have to know about it. That means educating ourselves about things we would rather never see, hear, or learn. Another is potentially navigating difficult social situations that involve food we won’t eat, people who don’t understand us or are openly hostile to us, or actual animal abuse right in front of us. In her column, Piper Hoffman writes about these and other day-to-day problems we face, and also delves into the details of some of the unthinkable cruelty that industries, governments, and individuals perpetrate upon non-human animals. 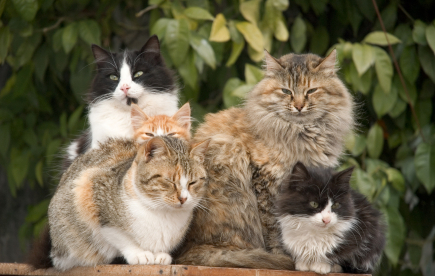 Hello, and welcome to my column in the new Our Hen House online magazine! Before I describe what you can expect from this column, I’d like to give you a sense of how I became a vegan and an animal activist. Like so many of us, I didn’t start that way.

For as long as I can remember, I loved cats. My first cat, Salmon, slept by my knees nearly every night of my childhood. A tabby with brilliant orange fur and a regal face, Salmon was my best friend.

It was obvious to me that he had feelings and his own loyal, if occasionally crotchety, personality – he wasn’t just an object or automaton. When I cried, he would sit by me as I stroked him. There were toys he loved and toys he ignored, favorite places to sun himself, and a plastic comb that he would scratch his face on until the skin under his white chin turned pink. Though not human, to me, Salmon was a person.

As a junior high school student in the mid-80’s, it dawned on me that the animals I ate had feelings and personalities, just like Salmon did. One evening, I saw a whole, plucked chicken on the kitchen counter, and was struck by something I had never truly considered: that the chickens I ate didn’t start out as ready-to-eat parts, but as living birds.

At the time, many nutritionists, doctors, and even vegetarian advocates considered my diet risky. They said people had to eat complementary proteins in one sitting in order to absorb full proteins. This was long before the internet, and I didn’t know any other vegetarians, so I had no resources to evaluate for myself whether I really had to go through that much effort. In my middle-school mind, I decided that if vegetarianism was moral, it must also be healthful, so I ignored the fuss over proteins. It’s lucky for me that I was right.

I don’t remember coming across any information about factory farming generally, anything about animals raised for dairy, eggs, or wool specifically, or even the word “vegan,” for many years. I did know about the overpopulation of companion animals, though, so in high school I helped found a group to raise money and organize volunteers for shelters. At the same time, I headed up a chapter of the human rights group Amnesty International; we lobbied to and succeeded in freeing a Jew whom the pre-Glasnost Soviet Union had not allowed to emigrate. The common thread for me was and remains suffering: call me a maverick, but I’m against it.

It was a long time before I took the next step for animals, from vegetarianism to veganism. This time Peter Singer was responsible. His book, Animal Liberation, which I read in the early 90’s, was my first exposure to the horrors of factory farming and the fact that animals were tortured to put the cheese I loved and the wool I wore on store shelves.

Once again, I was on my own. I didn’t know any other vegans, had never come across a vegan restaurant, and couldn’t find many products targeted to vegans in the grocery store.

Deciding to proceed gradually, I first replaced the cow’s milk in my morning cereal with soy milk. It tasted terrible. Without any idea what to do next (the internet, with its mother lode of vegan information, was still in its infancy), I gave up.

I eventually came across a group of vegans when I joined the Student Animal Legal Defense Fund at Harvard Law School. The first thing I learned from them was that rice milk tastes better in cereal than soy, and from there, the sailing was much smoother. We had regular vegan potlucks and exchanged recipes, in addition to our work educating our classmates about animal issues and lobbying the faculty and administration to introduce a class on Animal Law. (After four years, they did.)

Later, I worked for the Animal Legal Defense Fund as an attorney, handling cases against the federal government for rounding up wild horses in the west, requiring animal testing of consumer products, and failing to protect animals locked in small, barren cages in roadside zoos. We worked on helping chickens tormented for their eggs, and on fighting advertising claiming that cows exploited for their milk were “happy.”

There was, and is, so much to do to free non-human animals from human cruelty.

None of us can do this work alone. Without my law school group, I could not have become vegan, and without the Animal Legal Defense Fund, I could not have mounted influential campaigns against the horrific practices we opposed.

I plan to use this space to help animal advocates work together by publicizing the problems we face and the steps we can take towards fixing them. I will write about developments in law, public policy, psychology, and other relevant fields. I will discuss the torture of animals raised for food and fiber, and of those used for experimentation and entertainment; the suffering of wildlife whose habitat humans destroy, and whom we hunt to near extinction; and the often tragic results of our complicated relationship with the animals we call pets. Each time you read this column, I hope that you will learn something you didn’t know, and be inspired to take action to help the creatures we care about so deeply.

None of us can do this work alone, including me. Please share your thoughts in the comments about the subjects you would like to read about, questions you would like answered, and resources you need but can’t find. I look forward to our work together.