Story From New Collection “With Animal” by Carol Guess and Kelly Magee (Bonus Giveaway for the Flock!)

At Our Hen House, we do our best to bring you the latest from the world of animal rights. That said, when it comes to telling you about books, there are just so many amazing new ones covering all kinds of animal issues, and we simply don’t have time to review them all (but don’t miss the ones we have reviewed). That’s why we thought long and hard and decided to bring you this exciting program. From time to time, we’ll publish excerpts of the author’s choice — highlighting the best in animal rights books (both fiction and non) — right here on our online magazine.

Today, we bring you a short story from the collection With Animal, by Carol Guess and Kelly Magee.

As a bonus, OHH flock members can enter to win a copy, so read on beyond this excerpt for details. (Not yet a flock member? Become one today!) 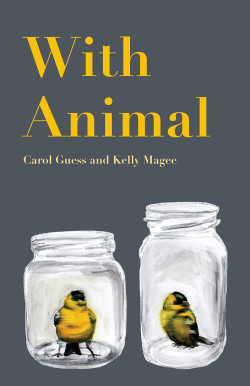 From the book’s press release:


Hybrid twins: one human, one horse. A man pregnant with a kangaroo, a woman raising a baby dragon. A twenty-first century Virgin Mary reimagined as a queer single mother giving birth in a petting zoo. In this collaborative short story collection, Carol Guess and Kelly Magee magically and playfully subvert assumptions about gender, sexuality, parenting, and family. These lyrical fictions bare teeth and spare no claw. They’ll leave you questioning the lines between human and animal, parent and child, love and dominion.

by Carol Guess and Kelly Magee

When she learned that the baby was human, she felt disappointed. It rattled inside her, fearless and furless, alphabet of bones and thumbs.

An animal pregnancy was all soft tongues, lapping; pink silk and decoration. Multiples, so they took care of themselves. They nested inside each other, fully formed at birth.

It wasn’t her fault, her husband reminded her. His DNA decided things. He was the carrier; he was the male. Still, she talked to the baby animals. Named them as if she might keep them.

Of course mothers could only keep human infants. Baby animals were whisked away. Her first three pregnancies were bundled in yellow blankets and disappeared down the hall with the nurse. Of course they reassured her that her kittens, puppies, and pandas were loved; cuddled and coddled. Of course she didn’t look at the smoke that flew over the hospital, crooked gray birds.

This time it was human, so she could keep it. Her husband would name it, reward her with gifts. She would be given a pink or blue blanket, press a heart to her chest, nurse a face when it cried.

Where were her animals? Where had they gone?

The little human baby snowballed inside her, colder and harder, collecting sharp stones.

Ivy covered the windows of the animal nursery.

She winced when her husband stroked her stomach: Henry, Catherine, Leroy, Lee.

When the baby was born, she felt pleased. He dropped from her like an anvil, dense and singular. Dark hair curled down his back. He didn’t suck at her breast so much as gnaw.

He lifted his head right away, arching away from her. She stroked his naked cheek until he turned and bit her finger.

She taught the baby to roll over. To speak for his food. By twelve months he’d learned to wait at his bowl in the morning. By eighteen, he could climb the refrigerator. Evenings, she stroked him in her lap, his limbs tucked under, his soft snores vibrating her belly.

Of course she worried when, by twenty-four months, the sounds he made for food hadn’t turned into words – the yips and snaps failed mamas and papas. Of course she listened when they told her to read to him, sing to him. Once upon a time, she said. ABC, she said. He bared his teeth.

Her husband was served the notice at work. An error, it said; a birth record filed wrong. Wrong name. Wrong species. In bold, a date and address for returning the baby.

We could petition, she said.

Her husband wept. No use, he said.

Their child eyed them, cobbling understanding from pitch and gesture. His mouth groped, tongue pushing teeth, teeth pushing lips. Maaa, he said. His intelligent eyes fixed on her.

A gritty haze covered the city. She ran the wipers, and her child quivered, strapped into the back seat. His nose pressed to the window. To the raccoons and turkey vultures scavenging the ditches. At the rest stop, he took off. Bolted straight for the highway. She braced herself, but instead of collision, a flock of birds lifted, broken, into the sky. Her boy beneath them, leaping and gnashing. She called him, and he came loping back.

Good boy, she said. She took him into her arms: her child, her son. From deep in her throat came a guttural sound.

She licked back the hair from his forehead. Nipped at his face. Nosed him back into the car.

Without her husband, there would be no more babies. No more names. No need for her language at all.

Carol Guess is the author of fourteen books of poetry and prose and is Professor of English at Western Washington University.

Kelly Magee is the author of Body Language, winner of the Katherine Anne Porter Prize. She teaches at Western Washington University.

FLOCK MEMBERS, READ ON FOR YOUR CHANCE TO WIN YOUR OWN COPY OF THIS BOOK!

…NOT A FLOCK MEMBER YET? Join us, for the animals!…