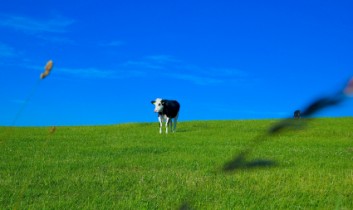 Laura Handzel is certainly not the only kid to have their first “go-vegan” spark of inspiration from their local 4-H club, and will most likely not be the last. That’s why we’re excited to re-publish her article today for #ThrowbackThursday!

This article’s originally appeared on Our Hen House on April 1, 2013. If you’d like to see a certain OHH article resurrected, email us at info [at] ourhenhouse [dot] org.

It amazes me that I meet so many people who are dedicating their lives to changing the world for animals, yet who grew up surrounded by a very different world view. Laura Handzel is sharing her touching story with us today. What happens when you put a 4-H club, a steer named Otis, and a little girl with a big heart and an open mind together? 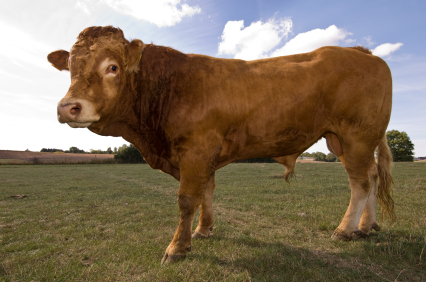 Synonymous with summer, county fairs are a big deal where I grew up in the Midwest. I was raised on a farm, where we had a menagerie of animals that we bred, bought and raised for food, sale and companionship. We had house cats and barn cats along with house dogs and farm dogs – the difference being that some lived primarily outside with shelter and some primarily in our home. We bred horses to ride and to sell. We bred beef cows to eat and to sell. We also rescued many animals, including horses, sheep, dogs, cats, rabbits, and even a donkey and a lovebird. There were no dirty, windowless buildings overcrowded with animals on our farm. Instead, there were expansive rolling pastures spotted with clean barns and shelters and protected by thick forest. It was not your typical farm by today’s standards. It was much better, but still a farm nonetheless, with animals as the main commodity. And the county fair was the time to show them off.

Being a farm girl, I was, naturally, a member of my local 4-H club, which meant the county fair was an even bigger deal. I made great friends and gained tremendous experience thanks to 4-H and the fair. I learned about all sorts of animals, crafts, and photography. I trained dogs, rode horses, and showed cows. I never thought twice about showing a beloved heifer named Lady. It was a fulfilling experience, what my parents hoped for me (especially my dad), and I was fine with it. For reproducing females and prized bulls, it seemed that life was pretty good on the farm. So after the county fair, Lady stayed with us to birth calves and live the rest of her natural lifespan.

My 4-H career ended horribly, though, when I showed my first and last steer, Otis.

I wasn’t one of those kids who turned vegetarian at a tender age. Far from it. I don’t think I even heard the word vegan until I was in college, and the only vegan I knew then seemed really angry about it. Undoubtedly, I grew up in a family that instilled a deep love for animals, but the love was of a different type. On the farm, we expressed our love by caring for our animals kindly and raising them well. Animals, however, existed for human use and enjoyment. That was God’s intention, and so a beef cow fulfilled its life’s purpose by ending up on the dinner table. Such was the world, or so I thought.

I knew Otis from the time he was born and took over raising him when he was weaned from his mother at about six months of age. (Early weaning is standard practice – it costs less to feed beef cows who aren’t nursing.) I fell in love with him much too easily. But then again, he was an incredibly gentle soul, curious and sweet. Otis was a spunky and playful calf but grew quickly into a massive steer thanks to my dedicated care. I spent a lot of time with him, brushing him and talking to him about 13-year-old girl stuff. He grazed freely on our lawn, and he had his own stall in the barn. I took him for strolls almost daily, and he even let me ride him. He trusted me. I trusted him, too, and we were friends even though he gave the sloppiest kisses ever.

As Otis grew, so did an uneasy voice in the back of my head. He was a “food” animal, but I started to recognize that he was no different than Lady – or the dogs, cats, horses, rabbits, and sheep we wouldn’t eat. A nonsensical hierarchy dictated our animals’ fates. For instance, the sheep weren’t exactly companion animals but, for us, they weren’t for eating either. They were a novelty of sorts, and we eventually gave them to a petting zoo. The rabbits were companion animals, but not like the house dogs and house cats or favorite horses that were the apex of the hierarchy. The farm dogs and cats lived a more rugged life. Then came the bulls and cows. Steers (castrated bulls) had it the worst. Besides only being allowed to live until about age two, their final months were spent in a smaller, dirt and concrete enclosure eating a grain-rich diet in preparation for slaughter. The entire matter was complicated even more by our rescued animals. Nothing was required or expected of them; they didn’t have to earn their keep, unlike so many of the other animals.

The pieces simply didn’t fit. Otis was making me question the world as I knew it and I was starting to suffer a serious internal crisis. Yet, I rebuffed the voice inside telling me something was wrong, and I kept it all to myself. I worried a lot what others would think. What kind of tough farm kid couldn’t handle auctioning off her 4-H steer? I didn’t want to be accused of “acting like a girl.” What would my parents say? They were so proud! What about the rest of my family? My friends? Besides, “pet” steers didn’t exist! Even the idea was crazy. It felt as though the entire situation was out of my control. But was it? This is a question I still think about a lot because, well, I still think about Otis … a lot.

I’ll never forget having to lead my huge and gentle friend around a small pen as the auctioneer sang out an increasing price per pound. I was devastated. The voice in my head was screaming, and I couldn’t control my tears. I remember feeling sick at the realization that the sight of me, a crying 4-H girl, actually seemed to drive up the price. $1.10/pound. That was the cost for my friend. The reality of it all collapsed on me. This situation wasn’t right, and I didn’t want to go through with it.

I found the courage to tell my parents, who responded that it was simply too late – “And remember, Laura, Otis doesn’t belong to you. What about your nieces?” Technically, it was true. He was “owned” by my brother-in-law. Before Otis was even born, I’d agreed to the 4-H gig to generate needed income for my brother-in-law and his family, which included my sister and my two small nieces. Plus, I would get a cut of the profit, which I planned to spend on ballet pointe shoes.

“Besides, he’s going to spend years at a farm before they send him to market.” I knew these last words weren’t true, but I chose to believe them. So that night, I hugged my good friend farewell, gave him a kiss, and walked away, leaving him at the county fair barn to be loaded onto a truck without even so much as a familiar face to comfort him as he was taken directly to his final destination, a slaughterhouse.

I mean it when I write that I learned tremendous lessons in 4-H. My experiences in 4-H and on the farm completely changed how I view animals and how I express my love for them. Without question, Otis transformed me into a staunch animal protectionist, though the transition was a slow one. Actually, this week marks five years since I’ve successfully dedicated my career to animal law. I also embrace living a vegan lifestyle, I share my home with four rescued animals, and I volunteer for various animal protection organizations. In these ways, I honor Otis.

I also honor him by telling his story. Please make no mistake. It’s not easy, and I still cry when I think of how I betrayed him. In fact, I’m crying as I write these words. But healing is ongoing. When I started my animal protection career, I worried about how my farm background might be viewed by the animal rights community. Let’s face it – fear of judgment is a huge barrier. It’s my hope that my fear of being judged can help me be open and compassionate with others, instead of standing in judgment of where they are in their own journey, and that by gently sharing my path and beliefs, more waves of change will arise. I know that a soft approach plants the seed for change. I also know that someone struggling with animal rights issues may easily be squelched if they don’t understand that we are all coming from a place where we once saw animals differently than we do now.

I even advise embracing the 4-H creed (minus, perhaps, the club part):“I pledge my head to clearer thinking, my heart to greater loyalty, my hands to larger service, and my health to better living, for my club, my community, my country and my world.” These words inspire me.

After all, facing the truth isn’t easy. But no matter how tough it is, I try to own my journey, and for the better – not the worse – Otis will forever be an integral part of it. I continue to reconcile my feelings about him by using them as fuel to drive my animal protection work. It’s unavoidable at times to feel overwhelmed or discouraged in this line of work. Turning bad into good is a necessary skill for any effective, lifelong animal advocate. So, I tell Otis’s story and acknowledge the ugly past while embracing a positive attitude for change and a better future for all animals. I think this is the very best tribute I can give my friend. 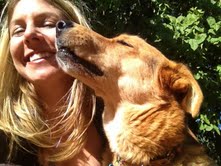