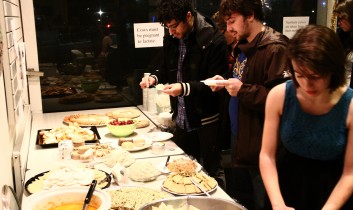 Over a year later and we’re still impressed by our Media Coordinator’s organization of a vegan wine and cheese tasting on her college campus–so much so that today we’re re-publishing Alessandra Seiter‘s guide to hosting your very own fancy vegan-stravaganza for #ThrowbackThursday.

This article’s originally appeared on Our Hen House on March 26, 2014. If you’d like to see a certain OHH article resurrected, email us at info [at] ourhenhouse [dot] org. 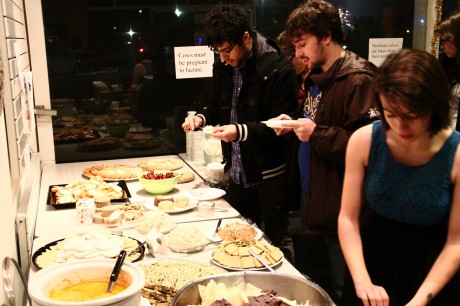 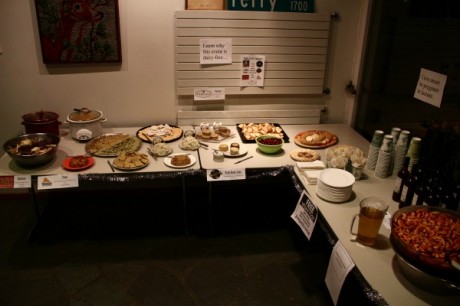 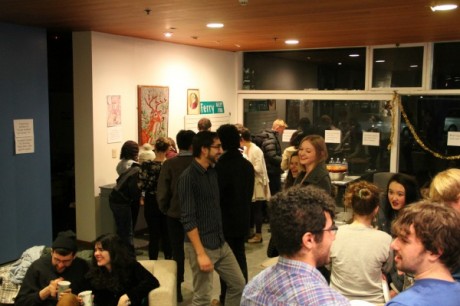 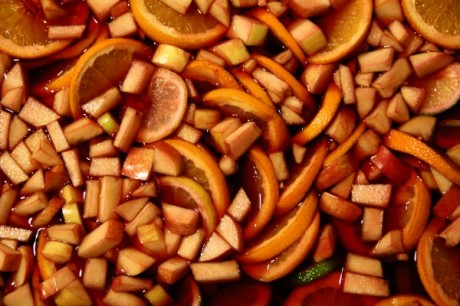 1.) Secure a Venue – in my organizational leadership at Vassar, I have access to a wide array of campus buildings, including, of course, my own house. You, too, can host a tasting in the comforts of your home, if the size and layout so allows. However, you may also want to reach out to vegan/animal rights-related businesses and organizations in your community to see if they’d be interested in collaborating on an event by offering the space in which to do it. Vegan/vegetarian restaurants, food co-ops, and community centers are good places to start in securing a venue. 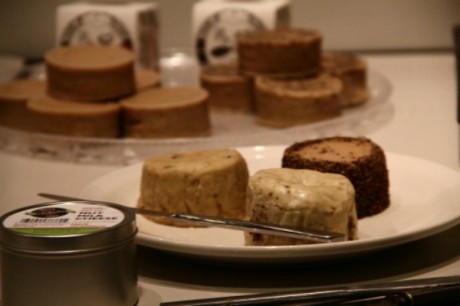 2.) Secure the Cheese – one of the most happily surprising lessons I’ve learned through my animal advocacy involves the seemingly unending generosity of vegan businesses, which are almost always willing to support any related group’s endeavor to change the world for animals. We first compiled a list of artisan vegan cheese companies to contact with our request for donations. With a simple email explaining VARC’s intentions in hosting a vegan wine and cheese tasting, I received positive responses from seven companies who enthusiastically agreed to contribute enough of their product to feed a small (peaceful) army. After the event, I was sure to send all of the companies who donated a warm thank-you email, as well as photos from the event. 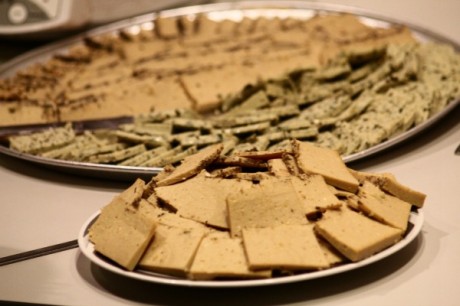 My Italian grandmother sensibilities kicking in, I fretted that we still wouldn’t have enough cheese for a successful event, and opted to make five wheels of vegan cheese myself (the recipe for one of which you’ll find at the end of this article!). The funding for this homemade cheese came from VegFund, a phenomenal organization that empowers animal activists worldwide by funding food-related outreach endeavors. Even if you choose to rely solely on donations for your cheese, VegFund is a great resource to keep in mind for other outreach activities.

3.) Secure the “Wine” – VARC’s beverage selection featured both donated and homemade goods, as well. However, VegFund does not offer money for beverages other than non-dairy milks, so we secured funding through the finance committee of Vassar’s student government. Though you may not have access to a similar organization or institution that provides event money, you can seek funding through alternative means. If you paired up with a local vegan restaurant or organization, for example, you can ask them to cover the cost of beverages. You may also want to consider buying beverages yourself and requesting monetary donations from event attendees.

Grape juice from Elianni accompanied homemade non-alcoholic sangria and vanilla-rosemary soda on VARC’s beverage table, providing an age-appropriate array of fruity drinks. However, if you’d like to feature true spirits, you’ll want to turn to such vegan wine companies as Vegan Vine (reviewed on episode 176 of the Our Hen House podcast!) and those listed on Barnivore. These purveyors can fulfill all of your needs for wine free of animal-based filtration ingredients like isinglass (fish bladder), gelatin, and egg whites. 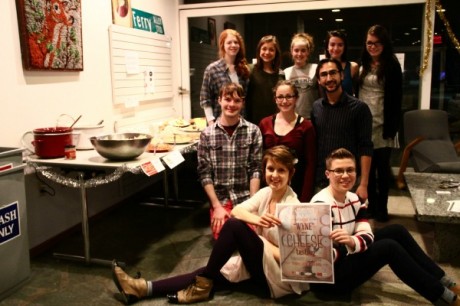 4.) Secure the Crowd – a major component in ensuring the success of any event is publicity. This can take the form of eye-catching posters, hung in public spaces in your community such as community boards at grocery stores. You can also research regional event-listing websites – often linked to local newspapers and magazines – and submit your event there. Taking out an ad in local publications, asking vegan-related businesses and organizations to help publicize, tabling to advertise the event at various community gatherings such as farmers markets, and using good ol’ word of mouth are other great ways to publicize. 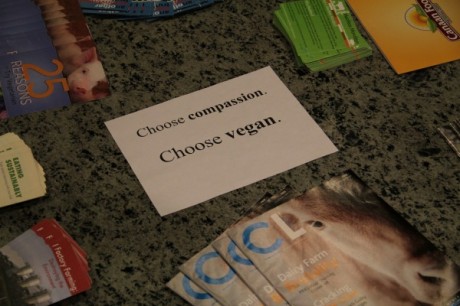 5.) Secure the Information—you’ll want to inform your event attendees as to why you want to show them the wonders of non-dairy cheese. At our event, for example, we hung homemade posters that explained the horrors of the dairy industry in terms palatable enough for a convivial event. On the living room tables, we also laid out a spread of pro-vegan literature from various animal advocacy organizations like Compassion Over Killing and Mercy for Animals. VegFund also offers funding for such literature, which you can order directly from the organizations’ websites.

Keeping these five tips in mind, you have the power to organize a successful vegan wine and cheese tasting, and thus help to mainstream the movement to end animal exploitation. The time has come for cruelty-free cheese to take over your community!

Many vegan cheese recipes call for specialized ingredients like agar-agar (a seaweed-based vegetarian gelatin), nutritional yeast, and miso. While these recipes taste divine if executed correctly, the step of boiling the agar-agar proves easy to mess up for individuals with less experience in the kitchen. To begin your foray into the world of homemade vegan cheese, I wanted to provide you with a simple recipe that uses basic ingredients, yet yields a cheese of astoundingly complex flavor and creamy texture. Sundried tomatoes (packed in oil) or kalamata olives would make happy additions to this recipe – simply chop them finely and stir them into the blended cheese mixture before you let the cheese rest.

½-1 tsp salt, depending on your taste

Place the almonds and cashews in a large bowl and cover with water. Let soak for at least 3 hours and up to overnight.

While the nuts soak, roast the garlic. Preheat the oven to 400ºF. Wrap the whole head of garlic (unpeeled) in tin foil, and place in the preheated oven. Roast for 30-40 minutes, or until the cloves are soft. Allow to cool before squeezing the soft cloves out of their skins and into a small bowl.

Once the nuts are soaked and the garlic is prepared, blend all of the ingredients in a high-speed blender until very smooth—about 5 minutes—adding a tablespoon of water at a time as needed to facilitate blending.

While the ingredients blend, line a colander with cheesecloth and place the colander into a bowl, making sure it does not sit on the bottom of the bowl. Transfer the cheese mixture into the cheesecloth-lined colander and set in a warm place for 1 to 2 days (the sourness of the cheese will increase as it sits). Place the bowl in the refrigerator and allow it to sit for a final day.

Preheat the oven to 200ºF. Carefully transfer your drained cheese onto a parchment-lined baking sheet, maintaining the dome-like shape it acquired in the bowl as much as possible. Bake for about 30 minutes, or until a golden-brown rind develops on the outside of the cheese. (Alternatively, you can dehydrate the cheese at 115ºF for 4-6 hours.) Let cool and serve. 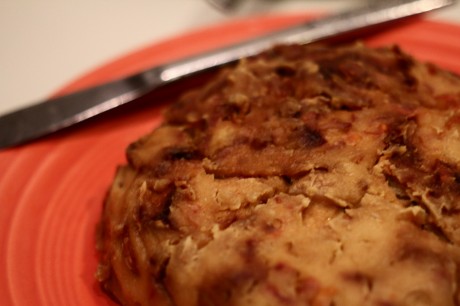