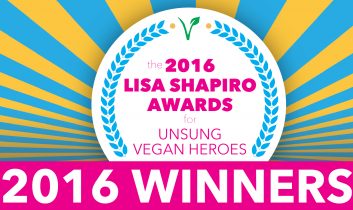 Our Hen House is pleased to again partner with The Pollination Project’s Lisa Shapiro Awards for Unsung Vegan Heroes. These awards are in memory of the amazing activist Lisa Shapiro, an award-winner in 2014, who died in June 2015 after battling cancer. Lisa was a hero to us and to so many others, humankind and animalkind alike. We are honored to bring you this article about Lisa by Dave Dulberg, followed by the announcement of the award winners.

And yet Lisa, taken so suddenly and tragically by cancer, was an exceptionally complex woman whose legacy is too easily boxed and put away on a shelf with eloquent expressions of awe and admiration. This is why the announcement of The Pollination Project’s 2016 Lisa Shapiro Awards for Unsung Vegan Heroes are so vital in keeping her life and work alive.

From dozens of worthy nominees, The Pollination Project selects ten vegan activists who grind out the hard daily work of easing and eventually ending the suffering and exploitation of animals. Without fanfare, without knowing even what eventual effect their efforts will have, these activists walk in the footsteps of Lisa, striving to create a more empathetic and sustainable world.

These footsteps began over 30 years ago with Lisa as a young woman working in a health food store in Boulder, Colorado. She pretty quickly began writing a newsletter about veganism and veganized the deli counter. She rose through the ranks and opened stores, then started a business called All Things Vegan in order to help fledgling vegan companies get off the ground and be successful. She founded the Boulder (And Beyond) Vegan Meetup, now over 1000 members strong, in a basement.

There are so many groups and events and companies that Lisa was associated with, but more than anything else, Lisa networked, argued, handed out pamphlets, protested, baked, marched, spoke out, and drew every breath in service toward the goal of ending animal suffering.

“She felt animal suffering at such a deep level, the deepest I’ve ever seen,” said Tofurky founder, President, and CEO, Seth Tibbot. “Come hell or high water, she wasn’t just going to sit there and let a point of view that was encouraging or supporting the suffering of animals go without a fight.”

This ferocity created some highly uncomfortable moments, and not just for those being unsettled by Lisa’s views. “She told me about breaking up a talk by a big organic milk producer, and this guy was absolutely furious at her for disrupting a talk at which he was promoting the benefits of organic milk,” said Seth. “She confided in me that it wasn’t easy to speak up, that she was shaking, but that she just couldn’t help herself.” Whether it was an event that promoted a new paleo diet, global sustainability or health food, Lisa always stood up and raised a powerful voice for those unable to speak for themselves.

“So many people value popularity over truth, or sometimes let things slide, or go home and say ‘I wish I’d said that,’  but she valued the treatment of animals more highly than her own popularity or what people thought of her,” Seth observed.

In addition to being a warrior for veganism, Lisa was also shamelessly energetic and optimistic. Said longtime friend and fellow advocate Marla Rose, Lisa didn’t care if the person she was meeting was “a superstar or a single person holding a hand written sign in front of a factory farm, everyone who was creating compassionate change was her hero. She was unabashed about that. She was palpably star-struck around every vegan. She loved, loved, loved every child.”

Marla speaks of her friend with the same vivacity she so admires. Though terminally sick, Lisa traveled to Chicago Vegan Mania, and Marla took her outside to see “this huge, long crowd of people lined up to come in. They were all revved up and excited. And even though she was in such pain, even though she knew how much veganism had taken hold in different communities, she was still completely amazed, like a kid in a candy store.”

And of course this revelation was bittersweet because it was also one of the things that was hardest for Lisa, to know that “finally things were shifting, that she had been at this for years and years and now real change was happening and she was missing out on this amazing party,”  said Marla.

Lisa had expressed fear of death and not just because of constant, terrible pain and the hard fact that her life was soon coming to an end, but because there was still animal suffering and she would no longer have any power to stop it. “She somehow felt like she hadn’t done enough. She cried and fretted about the animals. It was all so personal to her,” said another dear friend and activist Donna Rhodes.

But, in perhaps one of the most poignant and defining moments of Lisa’s life, Donna, a nurse with hospice experience who cared for Lisa during her final months and breaths, heard Lisa rouse herself from sleep to say that she was dying. Donna assured her that she was not alone. Lisa fell asleep, woke again and said: “I am not afraid to die anymore.” Peaceful and unafraid, Lisa Shapiro fell asleep and did not wake again.

Donna thought it very important to convey this change toward acceptance to Lisa’s vast network of friends and admirers. She was also very curious as to how it could come about. What had happened in those final consciousness ebbing moments? Though, of course, we will never know, it is hopeful to think that Lisa could finally see that she had done many lifetimes of good in service of the welfare of all beings; hopeful to think that she could see the beauty of being brazenly undeterred from living with her whole heart; hopeful to think that she was finally free to let go of a life she lived with such authenticity and strength.

And it is in honor of this hope that The Pollination Project announce the recipients of the 2016 Lisa Shapiro Awards for Unsung Vegan Heroes. The Lisa Shapiro Awards recognize these quiet superheroes of our movement: people who work humbly behind the scenes, creating a world where animals do not have to suffer at the hands of humans. With this recognition comes a $1000 award to use however the recipient sees fit, and a $100 donation is made in their honor to an animal charity of their choice.

***
The Winners of the Lisa Shapiro Awards
for Unsung Vegan Heroes

Julia Orr is a fierce advocate for animals and her work includes organizing hundreds of vegan events in her community, building and promoting vegan organizations, and inspiring and mentoring hundreds of new vegans. Julia has participated in hundreds of animal rights demonstrations, organized the vegan presence at the Climate Change L.A., has written extensively on the impact of animal agriculture on Huffington Post Green, and organized the largest anti-vivisection demonstration in the US.

Deeply moved by the plight of homeless animals living on the streets of India, Eileen Weintraub returned to the US to begin her own nonprofit, Help Animals India, to connect donors with animal shelters and humane education NGOs in India and Nepal. Doing nearly all fundraising, promoting, and grant making herself, Eileen, through HAI, has provided resources to open five new shelters, train dozens of veterinarians, educate more than one thousand community members, and administer thousands of emergency vet treatments, dog sterilizations, and rabies vaccinations.

Marc Ching created the Animal Hope and Wellness Foundation to eradicate the dog meat trade in Asia. Though beaten to the point of hospitalization, Marc perseveres in his self-mandated mission, and on a recent trip to Asia saved one thousand dogs from horrific torture and death, while also focusing an immense amount of publicity on the subject.

Lorelei Plotczyk has created three big online communities: Truth or Drought, Brain on Hugs, and Eat Plants, Drink Beer, and she also manages Circles of Compassion. She writes extensively, linking animal agriculture with the water shortages and drought in California, and advocates tirelessly and thoughtfully to bring peace, justice, personal, and environmental peace to the planet.

Linda Rapp Nelson is an incredibly dedicated activist in the Triangle area of North Carolina. Sensitive, thoughtful, and tenacious, she constantly advocates for compassionate choices, bakes beautiful vegan deserts, organizes fundraisers and educational opportunities, and works to ease suffering of rescued farm animals at Triangle Chance for All Micro-sanctuary.

Jessica Carlson is the founder of Erie Vegan Meet Up. She partnered with the Humane Society to start “Meatless Mondays” in two schools, raises money and volunteers extensively for the Humane Society, is a first responder for Tamarack Wildlife Rehabilitation and Education Center, and a board member on the local Erie Puppy Mill Awareness Group. Creating awareness in a very non-vegan friendly region, Jessica has also organized animal research and circus protests, movie screenings of “Cowspiracy: The Sustainability Secret,” and is on the nutritional advisory board at her current school.

Aneeha Patwardhan started by handing out booklets about not eating animals to cars at busy intersections in Pune, India, then graduated to helping organize effective weekly outreach events with short video viewings on tablets in malls, and eventually became the lead organizer of the Pune Vegan festival, one of the first of its kind in India, drawing over 5,000 attendees. Her level of dedication at such a young age is particularly impressive when considering that she is also fully immersed in her graduate studies in engineering.

Dr. Randall Cannon, a veterinarian, founded a project called Take Off Your Blinders, a nonprofit dedicated to exposing the realities behind factory farming, converting a pickup truck into a multi-media tool by installing two back-to-back flat screen televisions in the bed.  TOYB’s focus has grown to include animal abuses in entertainment, and so he also regularly visits the dog track, Sea World and the circus when it’s in town.

Patti Breitman is the co-author of “How To Say No Without Feeling Guilty,” and “How To Eat Like a Vegetarian, Even If You Never Want to Be One,” and has been a publishing consultant to many of the vegetarian world’s best known leaders including Howard Lyman, John Robbins, Neal Barnard, Ingrid Newkirk, Alan Goldhammer, and Victoria Moran. Patti’s commitment to living a life aligned with compassion, wisdom and service has served her well in her roles as director of the Marin Vegetarian Education Group, co-founder of Dharma Voices for Animals, on the advisory council of the Animals & Society Institute, a nonprofit that seeks the convergence of science, knowledge, ethics and compassion.

On behalf of the 50 judges who selected this year’s winners, CONGRATULATIONS to the 2016 recipients of the Lisa Shapiro Awards!

Please join The Pollination Project and Our Hen House in congratulating the winners of the Lisa Shapiro Awards for Unsung Vegan Heroes by sharing this news about their efforts to change the world for animals!