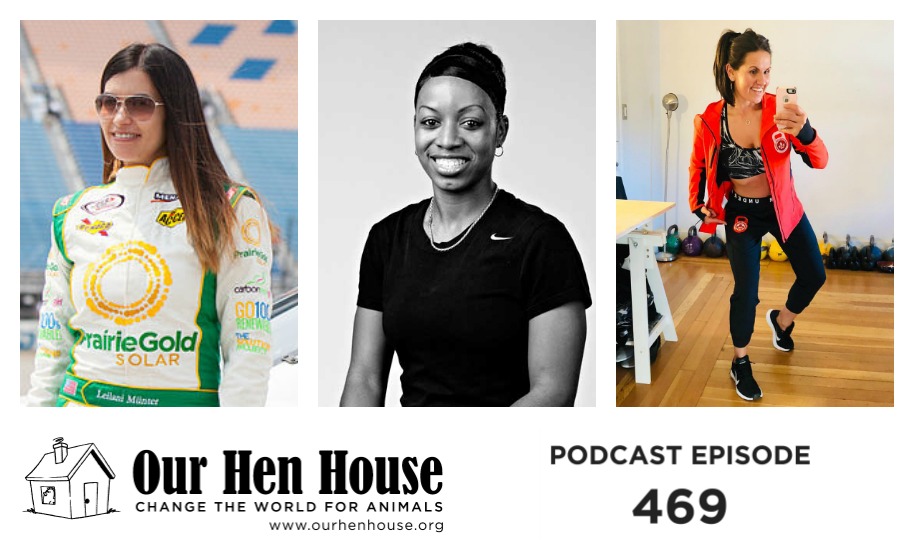 This week,  Jasmin and Mariann revisit past interviews with amazing vegan athletes.

First, we revisit our interview with Leilani Munter from episode 171. Leilani is a biology graduate, professional race car driver and environmental activist. Discovery’s Planet Green named her the #1 eco athlete in the world, ELLE Magazine awarded her their Genius Award and Sports Illustrated named her one of the top ten female race car drivers in the world.  She has been a guest at The White House and the United Nations in Geneva. Leilani is on the board of the Oceanic Preservation Society, a non-profit that creates film, photography and media, inspiring people to save the oceans. They won the Academy Award for their first documentary The Cove and Leilani is featured in their 2015 documentary Racing Extinction. She joined us on in April of 2013 to talk about her vegan advocacy, including giving us the skinny on the VegNation Car, how she keeps her racing carbon-neutral, and her work mainstreaming the movement to save the ocean and its inhabitants. She also told us about the biggest challenges she faced as a woman in a sport dominated by men, as well as those she faced as a vegan and an activist in a meat-centric world.

Then, in an interview from episode 123 in May of 2012, Milani Malik tells us what it was like to play for one season in the Men’s Professional ABA for the NYC Thunder, as the only woman in the country to to do so. She talks about her teammates’ reactions to her plant-based diet, her favorite foods that keep her strong, what it was like to be raised as a vegan – one of six kids, by the way, all raised vegan! – and what it’s like to be the only woman on a professional men’s basketball team.

Finally, our live interview with award-winning athlete Jennifer Hintenberger who talked to us on episode 126 back in June of 2012 about how she was able to recover from many physical illnesses and becoming a kettlebell champion through adopting a plant-based diet. She tells us how her veganism influences her athleticism, animal rights, and all the serious illnesses she was able to overcome when she adopted a vegan diet. She also gives us a lesson in how to lift a kettlebell.

In the intro to this episode, Mariann and Jasmin talk about the 2019 versions of themselves, their thoughts on Our Hen House going into its TENTH year, and how animal sentience will be regarded in the future.

This week’s episode brought to you in part by Sunday Scaries Vegan AF CBD gummies for anxiety.