“Burger King to offer vegan Impossible Whopper — but how healthy is it?” – Yahoo News 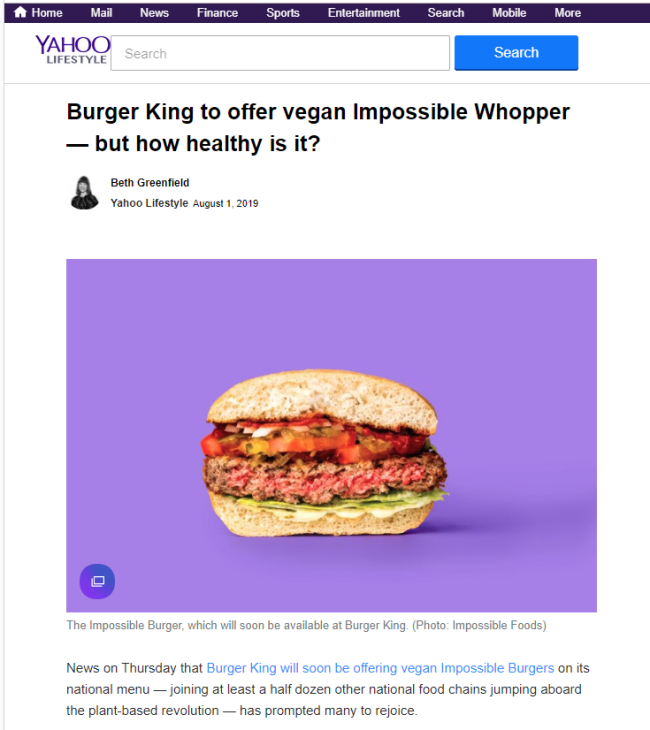 Excerpt of: “Burger King to offer vegan Impossible Whopper — but how healthy is it?” from Yahoo News

“Veganism has finally gone mainstream! This is a huge step forward,” Jasmin Singer, longtime activist and co-host of the popular animal rights-themed podcast, Our Hen House, tells Yahoo Lifestyle, of the announcement by Burger King — which follows in the footsteps of others by Dunkin Donuts (in New York City), White Castle, Little Caesars, Big Boys, TGI Friday’s, Carl’s Jr. and Cheesecake Factory, all of which now offer, at least regionally, some version of either the Impossible Burger or its chief competitor, Beyond Meat.

“Are these health foods? No,” says Singer, author of the food-focused memoir Always Too Much and Never Enough, with her next book, a vegan lifestyle guide, forthcoming. “They’re healthier than their animal-based counterpart, absolutely… But when we’re looking at health, we also need to measure it from a more holistic perspective; destruction of the environment is obviously bad for our health, and let’s not even get started on the animals’ health.””