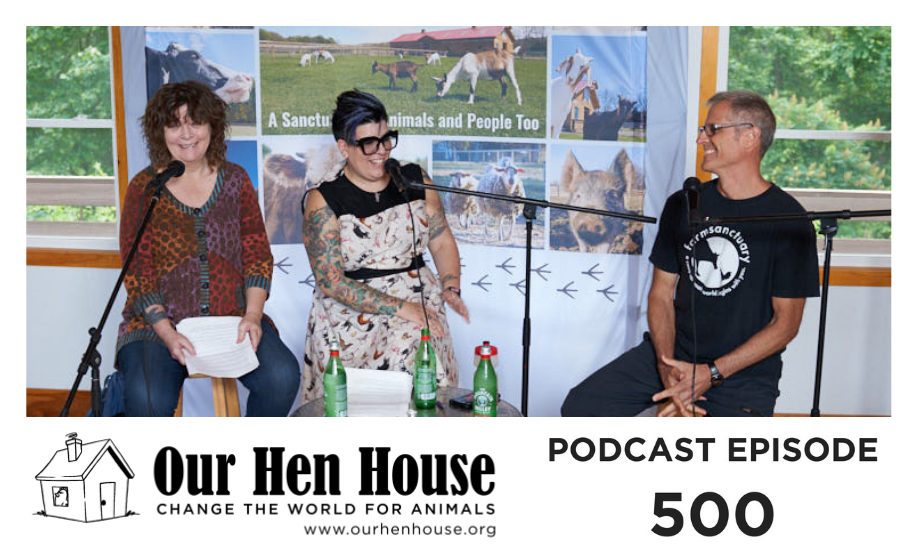 This week, Mariann and Jasmin celebrate the 500th episode of the Our Hen House podcast! Over ten years, Our Hen House has released episodes every single week without missing a beat. The show has utilized its philosophy of indefatigable positivity to elevate the voices of activists and leaders all over the globe who are working tirelessly to change the world for animals. Jasmin and Mariann would like to extend a sincere THANK YOU to every guest who has ever been on the show, all of the current and former Flock members, and everyone who has ever listened to the show or supported us in any way. We’re looking forward to the next 500 episodes!

This episode was recorded live at Woodstock Farm Sanctuary, and features an amazing interview with Gene Baur of Farm Sanctuary. Gene talks about the changes he has seen in the animal welfare movement over the last ten years, the importance of media outlets like Our Hen House for changing the world for animals, and the changes he predicts over the next ten years.

Gene Baur has been hailed as “the conscience of the food movement” by Time magazine. For more than 25 years he has traveled extensively around the country, campaigning to raise awareness about the abuses of industrialized factory farming and our current food system. A pioneer in the field of undercover investigations, Gene has visited hundreds of farms, stockyards, and slaughterhouses documenting their deplorable conditions. His pictures and videos exposing factory farming cruelties have aired nationally and internationally, educating millions about the plight of modern farm animals. In 2008, Gene’s book, Farm Sanctuary: Changing Hearts and Minds About Animals and Food, became a national bestseller. Gene, who began his activist career selling veggie hotdogs out of a VW van at Grateful Dead concerts to fund farm animal rescues, is currently Farm Sanctuary’s president. With shelters in New York and California, Farm Sanctuary provides rescue, refuge, and adoption for hundreds of farm animals each year, enabling visitors to connect with farm animals as emotional, intelligent individuals.

This episode also features a fascinating interview between Jasmin and Tricia Stevens, the Charitable Giving and Ethical Campaigns Manager at LUSH North America. Tricia tells us about the incredible work that LUSH does to increase consumer awareness around environmental issues and corporate accountability, build powerful partnerships with groups who are changing the way animals are perceived, and how LUSH uses media campaigns to advance their messaging.

This week’s episode is brought to you in part through a generous donation from BetterHelp. Use the promo code “henhouse” for a listener discount on BetterHelp’s services.

The Our Hen House theme song is written and sung by the incredible Michael Harren, who is also OHH’s Director of Communications! The photo in this week’s cover art was taken by our good friend Derek Pashupa Goodwin! Don’t forget to tune into Our Hen House’s other two podcasts: The Teaching Jasmin How to Cook Vegan Podcast, and The Animal Law Podcast.