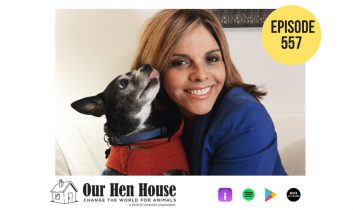 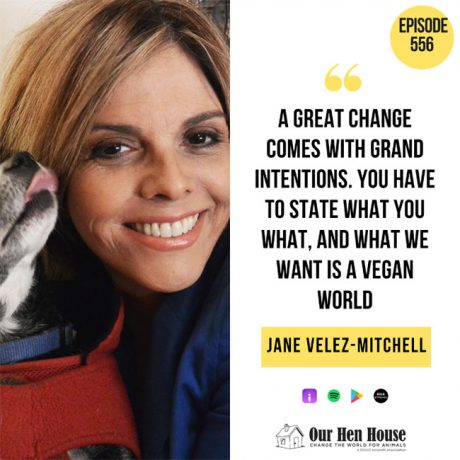 Jasmin has landed safely at her new home in the Catskills and is bubbling over about the hiking trails and her new neighbors, who include woodchucks and bunnies. While she’s waiting for her things to arrive, she has caught up in person with Mariann and, most important, with Rose. They have been putting in place the social distancing rules of their COVID Pod, and future events include the local drive-in movie and maybe even some in-person podcast recording.

For the interview, Jasmin is joined by Jane Velez-Mitchell, the founder of JaneUnChained, the popular social media news outlet that produces original video content on animal rights and the vegan lifestyle. Previously a news anchor at KCAL-TV in Los Angeles, WCBS-TV in New York, and CNN’s HLN, she currently hosts New Day New Chef, a fun plant-based cooking show available on Amazon Prime. Jane has won four Genesis Awards from the Humane Society of the United States, and in 2015, she received the Nanci Alexander Animal Activist Award.

In this episode, Jane shares what she has focused on during the Covid-19 quarantine period, which include a mind-boggling number of projects rooted in fighting the devastation wrought by animal agriculture and supporting the joys of the vegan lifestyle. Of course, Jane Unchained continues to produce its groundbreaking daily vegan cooking show on Facebook. She also tells us about the Covid edition of her Amazon Prime cooking show, i.e., New Day New Chef Support and Feed Edition, which reports on those who are helping those in need during the current crisis. Jane also discusses the documentary she directed, Countdown to Year Zero, and explains why 2026 is the critical year in terms of triggering or preventing an environmental apocalypse, and how the key to a positive outcome is for everyone to stop eating animals.

“A great change comes with grand intentions – you have to state what you want, and what we want is a vegan world.”