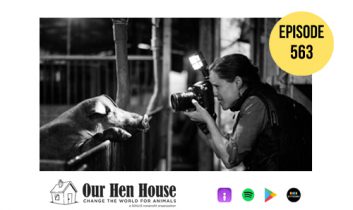 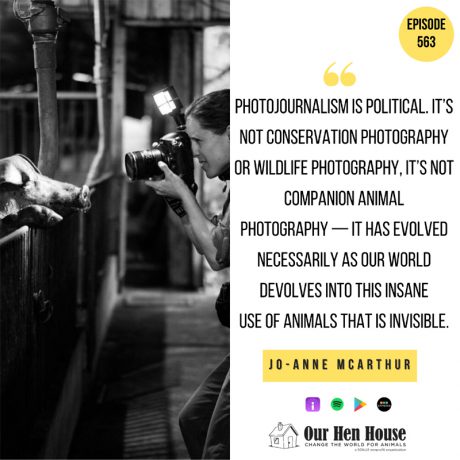 Jasmin and Mariann kick the show off with a discussion of Jasmin’s trip to the Catskill Animal Sanctuary and her visit with her namesake pig. They also chat about My Octopus Teacher, the Netflix documentary, what Jasmin got out of watching it, her reservations about it, and why Mariann is reluctant to give it a try. Mariann delves into a quick discussion of animal philosophy and discusses eminent philosopher Martha Nussbaum’s recent online lecture on her “capabilities” approach to understanding our obligations to animals.

This week’s vegan businesses are Seasoned Vegan, where you can eat delicious soul food in Harlem, along with its Super Vegan Market, the go-to place to order vegan products for delivery nationwide, Rescue Chocolate, an artisan chocolate company which donates all net profits to animal rescue, and VegEvents.com which helps people find vegan events where they can connect with their peeps.

Today’s guest is Jo-Anne McArthur, an award-winning photographer, and author, who, through We Animals Media, records our complex relationship with animals in over sixty countries worldwide. She was the subject of the critically acclaimed 2013 documentary The Ghosts in Our Machine, which followed her as she documented the suffering of exploited animals. Jo-Anne’s latest book is HIDDEN: Animals in the Anthropocene, in which she brought together the work of 30 photojournalists recording the plight of animals in numerous settings around the world.

Jo-Anne joins Jasmin today to discuss why, despite her experience of the dark parts of life, she thinks that we live in a beautiful world and how that belief forms part of her coping mechanism needed to do the difficult work of documenting the suffering of animals. She gives us the low-down on her new book HIDDEN: Animals in the Anthropocene, and how it aims to break through the wall of denial and help to achieve justice. Jo-Anne also discusses the connection between COVID-19 and animals and whether she thinks we will see a substantial shift to plant-based eating as a result of the pandemic.

About Forager Project’s Vote Campaign: Forager ​is committed to helping cultivate democracy. During the next month, Forager Project​ will be shifting packaging on its yogurts, kefirs, and milks to encourage consumers nationwide to get involved and vote this November and launching a broader effort to encourage everyone to vote this November 3rd. Visit ForagerProject.com/vote to check on your voting status and/or register!

This episode is also brought to you in part through the generosity of A Well-Fed World. A Well-Fed World provides the means for change by empowering individuals, social justice organizations, and political decision makers to embrace the benefits of plant-based foods and farming. Learn more at awfw.org.