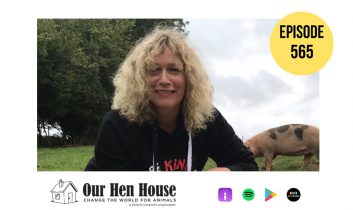 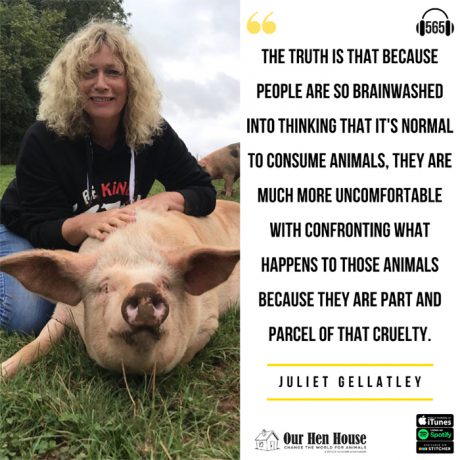 Juliet Gellatley joins the podcast today and we seriously couldn’t be more excited about this conversation. She’s the founder and director of Viva!, a campaigning charity that has been a foundational force for the advances for veganism and animal rights in the UK and elsewhere (and also kicked off Jasmin‘s career in animal rights!). Long before many others got on board, Viva! was focusing on ending the abuse of animals exploited and killed for food and promoting a vegan diet.

Among other things, we discuss HOGWOOD: A Modern Horror Story, a short film that details a groundbreaking investigation of a notorious UK pig “farm” by Viva!, along with the subsequent campaign that led to the to the facility’s demise. Part of that discussion is how to overcome the fundamental problem of animal rights campaigning — what is happening to animals is so awful that people can just shut down and refuse to watch films depicting it. Perhaps most importantly, we talk about how Viva! managed to bring enormous attention to the film and the horrors it depicts, and to distribute it via the major streaming platforms. This is incredibly effective activism! Juliet also discusses why people in the UK, a country known for, and proud of, its love of animals, believe that they have much better standards for the treatment of farmed animals than most countries, why they are sadly mistaken, and how to disabuse them of that false notion.

Juliet directs all aspects of Viva!, from campaigning, to writing articles, to giving public talks, and organizing fundraising events. She also founded and directs its health arm, Viva!Health, which concentrates on campaigning on health and nutrition. She has investigated many farms, revealing devastating animal cruelty, and is also the author of several books, including the The Livewire Guide to Going, Being and Staying Veggie, Born to be Wild: The Livewire Guide to Saving Animals, and, along with Tony Wardle, The Silent Ark.

“The truth is that because people are so brainwashed into thinking that it’s normal to consume animals, they are much more uncomfortable with confronting what happens to those animals because they are part and parcel of that cruelty.”
– Juliet Gellatley