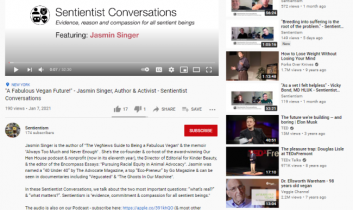 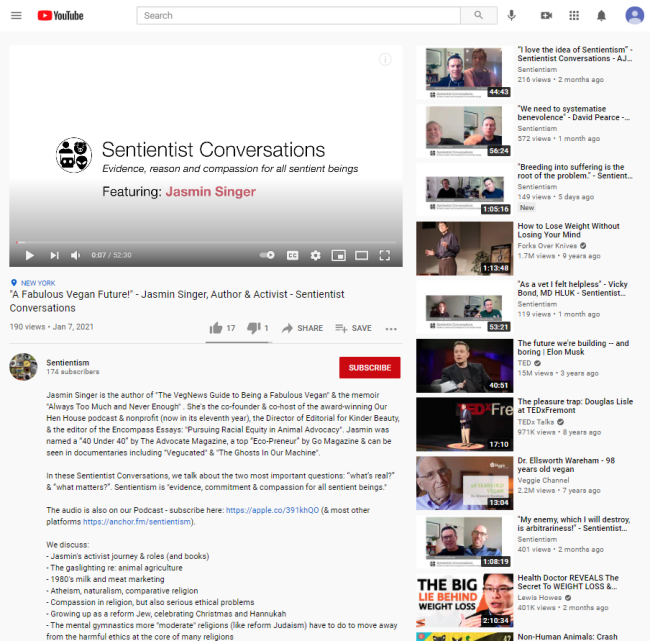 In these Sentientist Conversations, we talk about the two most important questions: “what’s real?” & “what matters?”. Sentientism is “evidence, commitment & compassion for all sentient beings.”

We discuss:
– Jasmin’s activist journey & roles (and books)
– The gaslighting re: animal agriculture
– 1980’s milk and meat marketing
– Atheism, naturalism, comparative religion
– Compassion in religion, but also serious ethical problems
– Growing up as a reform Jew, celebrating Christmas and Hannukah
– The mental gymnastics more “moderate” religions (like reform Judaism) have to do to move away from the harmful ethics at the core of many religions
– Humanism’s focus on the human species
– Do kids start out naturalistic and then get taught fabrications?
– Do kids start out compassionate towards non-human animals then get taught it’s “normal” to kill them for pleasure?
– The parallels between the indoctrination of religion and animal product consumption
– The “kryptonite” effect of animal ethics on otherwise careful, compassionate Humanist thinkers (whereas it’s more understandable for busy people with challenging lives) → Read more at youtube.com