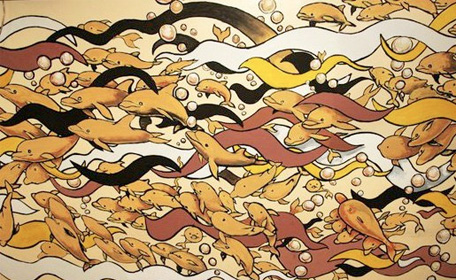 23,000 Dolphins Killed Annually in Taiji, and 23,000 Portraits Painted to Commemorate the Victims

Philippines-based artist, A.G. Sano, was so moved by the Oscar-winning film, The Cove — a documentary that exposes the dark underbelly of Japan’s dolphin-hunting culture — that he decided to commemorate the 23,000 sea mammals who are murdered each year in this horrific industry in Taiji, by painting 23,000 portraits of dolphins. The murals, which Sano has painted throughout the Philippines and the surrounding areas, draw attention to the plight of these aquatic wonders — animals whom Sano has been photographing for over a decade. Some mural hot spots have included schools, highway billboards, churches, and even gates on private homes. The Philippine-based design blog, Design Pinoy, covered Sano’s work in a compelling and cute article, “The 15 Most Popular Dolphin Murals in the Philippines.”

What Sano has done in creatively raising massive awareness about the inexplicable and nauseating slaughter of countless dolphins — animals who, according to The Cove, are “the most social creatures on the planet,” since “often, both male and females stay in the same pod for life” — is both noble and electrifying. According to Design Pinoy, “If you’re from the Philippines, there’s a good chance you’ve probably already seen or passed by a wall with colorful psychedelic graffiti of dolphins on them.” Think about that. One devoted and tireless artist has managed to reach virtually everyone in a huge country with his message, and he’s done it the old-fashioned way, with a brush and paint.

Sano’s artistic activist efforts have also garnered tremendous press coverage, including a passionate piece on CNTV that gives a glimpse into Sano’s impetus to use these murals as a way to change the world for animals, including quoting him as saying, “Please stop going to dolphin shows. Stop going to dolphinariums, because it fuels the dolphin drives in Taiji, it fuels the slaughter basically.” 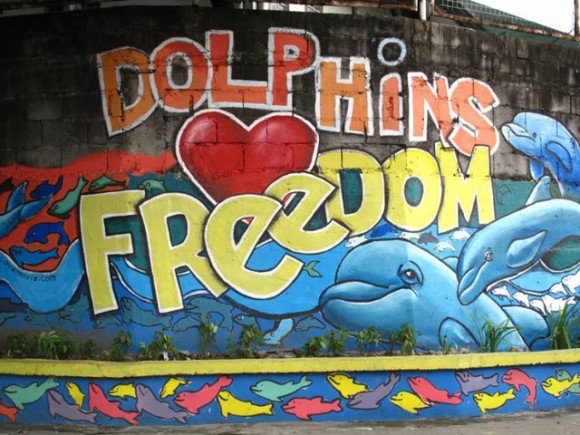 Episode 124: “When I dare to be powerful – to use my strength in the service of my vision – then it becomes less and less important whether I am afraid.”