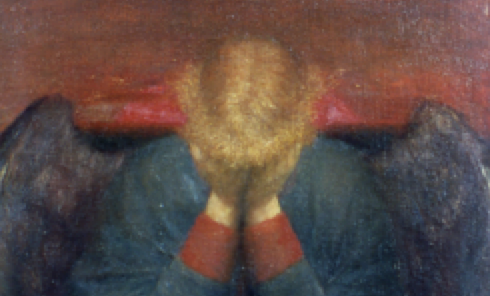 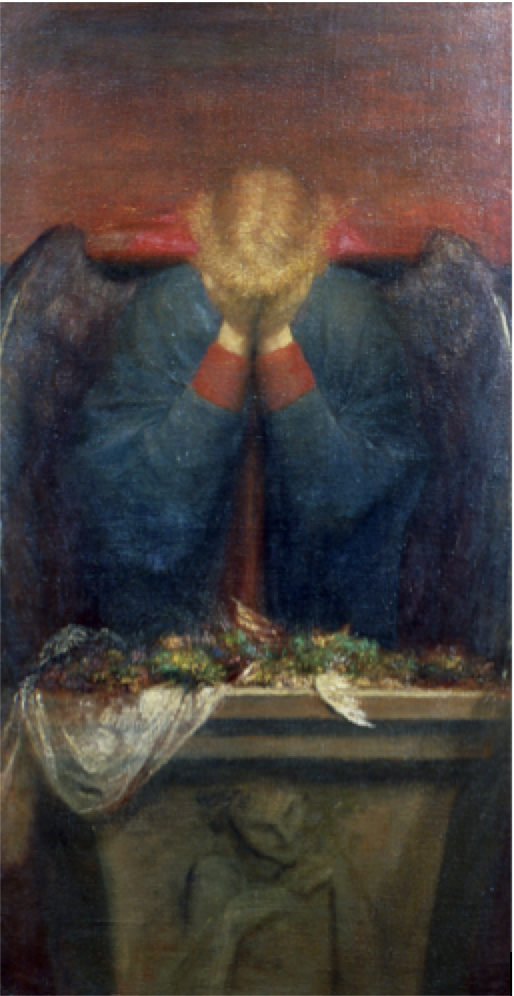 Today it is common for animal rights activists to turn to visual imagery as a form of protest against the use of animal body parts in fashion. For example, PETA’s “I’d Rather Go Naked” campaign features celebrities taking a stance against fur fashions. In this campaign, people like Eva Mendes and Tommy Lee pose nude to proclaim their support for this awareness effort. The visual is key in these campaigns — photographs of “beautiful” people with no clothes on — are intended to grab our attention. In this context, imagery becomes a powerful tool of social change.
While activists today may be familiar with campaigns run by groups like PETA, the history of visual images as a means of protesting the use of animal bodies in fashion has a much longer history. Over one hundred years ago, George Frederic Watts, a British artist and member of the Royal Academy, turned to visual imagery to express his outrage over the use of feathers in fashion. In 1898, he painted A Dedication: ‘to all those who love the beautiful and mourn over the senseless and cruel destruction of bird life and beauty. Also known as The Shuddering Angel, this painting was Watts’s response to the late 19th century fashion for wearing feathers. While this painting differs from late 20th and early 21st century activist efforts in terms of medium, style, and composition, the idea behind this picture — that visual imagery was an important way to take a stance against the use of animals in fashion — remains the same.
In the late 19th century, “feathered fashions” were a hot-button issue in both Britain and North America. Thousands upon thousands of birds from all over the world were being slaughtered so that their feathers could be used to adorn dresses and hats. The more “exotic” and colorful the feathers, the more desirable. In some instances, the entire body of a bird was used as decoration. For example, in the May 1884 issue of Our Dumb Animals, the monthly publication of the Massachusetts Society for the Prevention of Cruelty to Animals (MSPCA), an article entitled “Dead Robins Made to Do Duty on Ball Dress” gives a report of a gown worn in London that had several dead birds sewn on to the skirt. George T. Angell, the founder of the MSPCA, expressed outrage that “all those happy little heaven-given lives have been sacrificed for…adornment.”
In Britain, the Society for the Protection of Birds (SPB) was founded in 1889, and boasted over 5000 members by the end of its first year. Membership continued to grow at a rapid rate in subsequent years and included many high-profile campaigners attempting to stop this fashion trend. Among the aims of the SPB was to “discourage the wanton destruction of Birds,” and members pledged to “refrain from wearing the feathers of any bird not killed for the purposes of food.”
A Dedication was a visual manifestation of the growing protest against “feathered fashions.” At the center of the composition is a golden-haired angel with her head in her hands. She mourns over a stone altar upon which the remains of a number of birds are splayed out. The luminous colors of the bird bodies (even in death) are echoed in the angel’s robes, a compositional device that underscores the “innocent” and “pure” qualities thought to exist in both.
Watts was involved with the Society for the Protection of Birds, and A Dedication is clearly linked to SPB campaign themes. The painting received mixed reviews when it was first exhibited in London’s New Gallery in 1899. The Times called A Dedication “a curious work” and expressed concern that:

…the ladies who wear feathers in their hats do not take their act
so seriously as Mr. Watts does, and that some of them will
only smile when they find a great artist taking the trouble to
paint a majestic angel weeping — over what? Over a shelf-ful of
the wings of birds! It is a little startling to read so severe a sermon,
and from such a quarter, over an offence which well-meaning
people commit in all unconsciousness.

The reviewer’s last sentence is significant — if it was, indeed, true that “well-meaning people” were unaware of the consequences of their fashion choices, then the need for pictures like A Dedication would have seemed increasingly urgent to people like G.F. Watts. Like images used to protest against the use of animals in 21st century fashions, there was an important educational component to this painting.
A Dedication was reproduced in a number of different contexts, including on the cover of a campaign leaflet published by the Society for the Protection of Birds in June 1899. The reproduction of this painting in print form, coupled with the prominent attention that Watts’s pictures received from both the press and the gallery-going public, meant that a large number of people, on both sides of the feathered fashion debates, would have had the opportunity to view A Dedication in either its oil-on-canvas form or as a reproduction.
A Dedication was part of a larger, ever-growing body of creative expression aimed at ending the late-Victorian fashion for feathers. Poets, authors, illustrators, and artists took up this issue with increasing frequency during this period. For example, illustrated periodicals such as Punch and The Westminster Gazette published cartoons in which “fashionable” women were made to look foolish for their decision to wear feathers. As we look at Watts’s 1898 painting, we must remember that viewers in the late 19th century would have understood A Dedication in this broader cultural context. These efforts were, ultimately, quite successful, demonstrating the effectiveness of artistic expression in changing attitudes toward animal use.