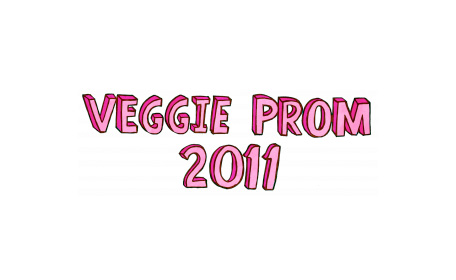 Finally, I have a date to the prom! Though — okay — teenage-Jasmin of the 1990’s somewhat begrudgingly opted to go to the Museum of Modern Art instead of the junior prom (DORK!), and chose to attend the Tony Awards (thanks for those tickets, Mom) instead of the senior prom (THEATRE GEEK!), I must admit that there’s this teeny-tiny part of me that feels, in retrospect, that I missed out, just a wee bit. 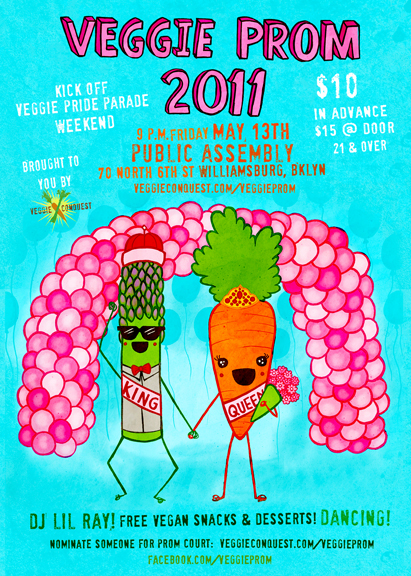 But not any longer! On May 13, my lovely lady, Mariann (who has also been prom-deprived), will be accompanying me to NYC’s 2nd annual “Veggie Prom,” which is an all-vegan dance (for grown-ups) complete with drinks, desserts, door prizes, and a (vegan) DJ who will keep the evening hopping with prom classics from throughout the generations.

Oh, and did I mention that, starting now (and regardless of whether you’re in New York), there’s also the opportunity to nominate your favorite activists to be included in the prom court? (Eh hem, eh hem!) At the prom itself, attendees can vote on prom king and queen, based on the finalists who make the court. Though, I must admit, I’m not entirely sure why it needs to be a “king and queen” (why not just the two top winners, even if that winds up being queen and queen, or king and king?), there is a repressed theatre geek inside of me that wants to be nominated, just so that the Class of ’97 can eat that. Okay, so maybe I have unresolved issues… But something tells me that many of you can relate.

But enough about my teenage histrionics of yesteryear implanting themselves in 30-something-year-old-me. The Veggie Prom is not only genius (organizer Jessica Mahady, also the woman responsible for the uber-popular Veggie Conquest, is at the top of my list of innovative, brilliant changemakers), but it’s also kicking off “NYC Veggie Pride Weekend,” which also includes the NYC Veggie Pride Parade and  Farm Sanctuary’s 25th Anniversary Gala. I’m really digging the electricity here in NYC lately, especially after last week’s wildly successful NYC Vegetarian Food Festival, which Our Hen House was honored to be a part of (hear our full review on last weekend’s podcast).

And regarding this prom and Jessica’s unique take on activism, can someone say Yowsa?! Not only is this a “a chance for a compassionate community to come together and celebrate,” according to Jessica (who likes to speak in alliteration), but since it’s encouraged that “people of all dietary persuasions” attend this soiree, what a cool chance for us vegans to show the not-yet-vegans exactly how it’s done? Not only are we compassionate, but we know how to party! And, of course, we are the cool kids now.

Put on your thinking caps, people, just like Jessica did. If you’re not in NYC, do you think that your town could use a Veggie Prom all it’s own? If not a prom, then maybe there’s another too-cool-for-school event you can put together geared toward 1)celebrating veganism, 2)advocating a compassionate lifestyle to those who are not yet enlightened, and 3)benefitting an AR group or campaign? There are so many other facets you can include, too: Get local vegan establishments to cater; distribute literature on animal rights; and get local speakers who can amp it up a notch, educating and inspiring. This kind of indefatigably positive activism can not only change the world for animals, but can also allow prom-deprived nerds like Mariann and me to relive our youth in a more festive way.

And if the DJ happens to play some Journey, I won’t complain.