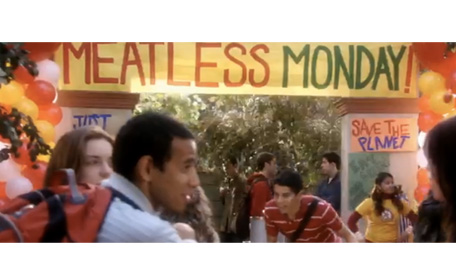 “Meat is not green, huh?” Cutie-pie boyfriend says to cutie-pie girlfriend, at the start of a recent episode of teen-hit TV show, 10 Things I Hate About You. Boyfriend Patrick continues, “If it is, I probably shouldn’t eat it.” Then, he takes a bite of his hamburger. Girlfriend Kat responds, “Don’t mock. This book is fascinating. Like, did you know that 18% of the world’s greenhouse gas emissions come from animal agriculture?”

As the show continues, Kat implements Meatless Mondays at her high school, and after some hesitation, Patrick finds himself enjoying a soy dog. When he asks Kat why the soy dog tastes like meat if she hates meat so much, she responds, “It’s not that I hate the taste. It’s just that whenever I see meat, all I see is this little face saying ‘Don’t eat me.'”

The episode, called “Meat is Murder,” was seen by 751,000 people when it aired last week, educating the masses about some of the horrors inherent in factory farming, and the importance of ditching the meat and dairy.

That, right there, is how you reach the mainstream.