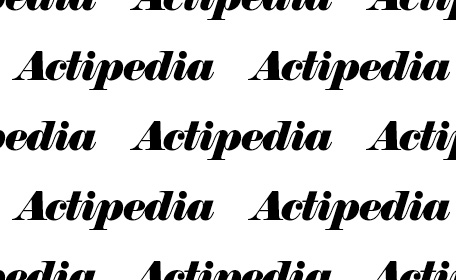 I admit that I frequent Wikipedia. It’s a perfect cheat sheet for those moments when I need a quick and easy glimpse into someone’s bio, or the history of an organization. Along with Thesaurus.com, when I’m writing, it’s usually an open tab on my computer. No shame here.

But imagine having a Wiki site that’s specifically dedicated to creative activism projects? Throw in there a subheading dedicated to creative animal rights campaigns, and you’ve got yourself Actipedia, “an open-access, user-generated database of creative activism.” The website explains, “It’s a place to read about, comment upon, and share experiences and examples of how activists and artists are using creative tactics and strategies to challenge power and offer visions of a better society.”

Developed in the Media Activism class at NYU, where occasional OHH guest-reviewer Loredana Loy studies, some of the featured animal rights projects (which Loredana herself added) include We Animals, a dramatic anti bull-fighting rally in Mexico City, “Shit the FBI Says“, and FARM’s Pay-Per-View campaign. Like other Wiki sites, users (like you! like me!) can start their own project page on this innovative and important website.

Clearly, Actipedia will join the list of websites that remain open on my computer. In addition to animal issues, there are a plethora of social justice and awareness-raising projects that I intend to read about and learn from, including “ArtWorks Projects: Afghanistan Exhibition,” an inspiring campaign that provides “visual advocacy tools which produce action on human rights crises at the grassroots, media, and policy levels,” and — for a more self-indulgent read — “Overlooked New York,” a community-building project that features “real New Yorkers who have found fascinating ways to unleash their joy on the roofs and rivers and parks and streets of New York.”

But beyond the hours of reading we all have ahead of us with Actipedia, hats off to Loredana Loy for using this cutting-edge class and project to make sure animal rights issues were in the mix. That’s exactly what we each need to do in our various communities; use them as a platform to speak up for those who can’t.

Episode 123: “We should remember in our dealings with animals that they are a sacred trust to us…[They] cannot speak for themselves.”

How Political Science Helped Me to Understand the Vegan/Animal Rights Movement and...