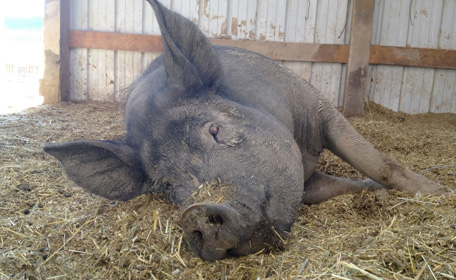 Last week we told you about the power that comes when we use our bodies as ammunition, specifically focusing on an activist who staged a daily kneeling protest in front of the legislature of Taipei, in order to get the attention of legislators whom he is calling on to improve the Animal Protection Act, as well as another activist in Tasmania who has been living in a tree for months in order to protest destructive logging. 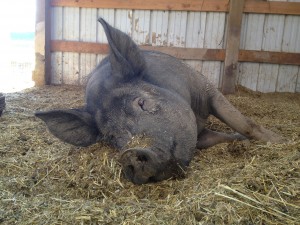 On those same lines, I could not ignore the extremely creative protest — also in Tasmania — by an activist who donned a pig suit and spent 24 hours in a crate. Similarly to the kneeling protester, Clare Knight (a.k.a. my new hero) — of the group Against Animal Cruelty Tasmania — is raising awareness and ruckuses with this protest, as a means to show the Tasmanian parliament that the country’s phase-out of gestation crates does not go far enough, and that farrowing crates should also be banned. This eye-catching display, well, caught eyes. In fact, Knight’s efforts have resulted in a flurry of media covering the story, making her bit of street theatre effective and far-reaching. She put herself on the line, and proved that one person can indeed make a difference.
This reminds me of Dan Dunbar, who we wrote about last year. Dan, who is half of the brilliant team behind the scrumptious and life-changing Dun-Well Doughnuts, built a human-sized battery cage, found an abandoned warehouse, and sat, nude, for seven days, in this cage, consuming only very tiny amounts of a grain mixture. As I reported last year:

Like battery cage chickens, Dan could not extend his limbs or turn around. His only solace, he told me, was that, unlike the over 9 billion chickens killed in the U.S. every year (that’s about 286 a second), he knew why he was there, and he also had the awareness that the week would end and he would be free. Unlike egg-laying hens — who, at the end of their miserable and shortened lives are murdered — Dan would never have to experience a slaughterhouse worker looming above him, about to end his life unnecessarily so that humans could consume his body.

These recent acts of old-school style activism have left me invigorated, reminding me of the power of stepping up, and sometimes dressing up, in order to ruffle feathers and create change.