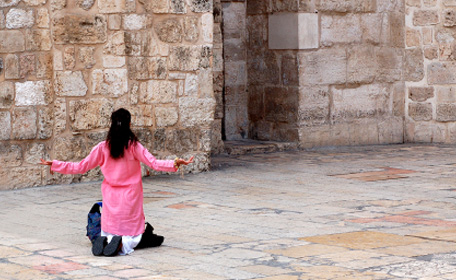 Judging from the positive responses we received to Lauren Ng’s recent article on the re-imagined church potluck, the links between religion and animal rights resonate with many of you. So, to give the people what they want, we’re excited to bring back this piece by Nick Lacetti on how to awaken a vegan consciousness in your own religious community. Happy #ThrowbackThursday!
This article originally appeared on Our Hen House on February 21, 2011. If you’d like to see a certain OHH article resurrected, email us at info [at] ourhenhouse [dot] org.
***
Earlier this month [EDITOR’S NOTE: and way back in 2011], I had the privilege of attending a fantastic event at Metropolitan Community Church of New York (“MCCNY”) — a conversation on veganism organized by Casey Easterling. MCCNY is an incredible, inclusive place. In fact, the Metropolitan Community Churches are unique as the first and only Christian churches to have a specific outreach to LGBT people. This groundbreaking event got me thinking about the importance of vegan outreach within religious circles. This is something I talked about last year [EDITOR’S NOTE: now 4 years ago] when Jasmin and Mariann invited my partner, Calla, and me to talk on their podcast about how Christianity pertains to animal rights.

Bee compassionate, for the love of God.

The veganism discussion I attended was part of MCCNY’s series of “conversations” on various issues. The event featured impressive speakers: Jim Allen, organizer of VegOut NYC, a NYC-based meetup group for LGBT vegans and vegetarians (which Our Hen House recently blogged about), Calla Wright, campaigns coordinator of Farm Sanctuary (who is, in the interest of full disclosure, the aforementioned Calla who happens to be my partner), Michael Easterling of MCCNY, and Brooklyn illustrator John Wyffels.
What was particularly great about the event was that MCCNY has a strong commitment to social justice, especially LGBT rights and marriage equality. You can imagine how amazing it was to have a vegan event at a place like that. I know I’m not alone in the observation that too many religious groups – almost all of them, in fact – blatantly ignore animal issues, even when they have a stated commitment to social justice. To have veganism recognized as a social justice issue that touches upon a multitude of causes, including animal rights, the environment, human health and workers’ rights, was an amazing opportunity, and all too rare.
Luckily, it doesn’t have to be rare – you can do your part to introduce veganism to your church, synagogue, mosque or temple. Here are some simple ideas that could be applied to many religious communities, regardless of creed or denomination:

Okay, so maybe you won’t immediately be successful in getting the sign out front updated with a pro-vegan message, like the chick sticker on my computer that says “Jesus Loves Me Too.” But by following one or more of these tips, you’ll definitely succeed in planting seeds of compassion — to use a Buddhist image — in a community where there weren’t any before, at least as far as animals were concerned. And that first step is crucial.

No Tricks! These Tees are Treats! New Our Hen House T-Shirt from Vaute Couture!