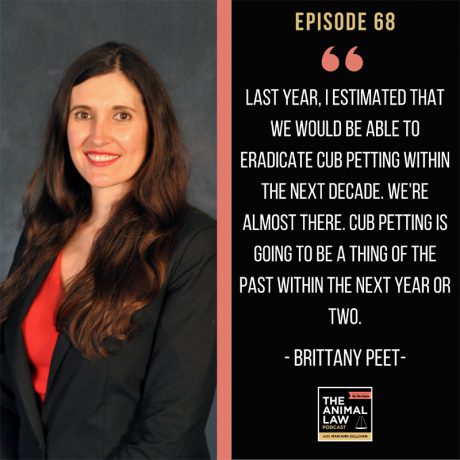 On this episode of the Animal Law Podcast, I am so pleased to welcome Brittany Peet, Deputy General Counsel for Captive Animal Law Enforcement for the PETA Foundation. We follow up on her appearance on Episode 42 when she told us all about PETA’s case against notorious roadside zoo and big cat abuser Tim Stark of Indiana’s “Wildlife in Need.” Little did we know at the time that Stark would be one of the players in the Tiger King, the wildly popular Netflix series that revealed the dark underbelly of the tiger biz in the US, such as a murder for hire plot and numerous violations of the Endangered Species Act, ranging from records violations all the way to killing 5 tigers. Now, Brittany is here to report on the ongoing struggle on the legal front to get the Tiger King’s tigers out of captivity and into sanctuaries, which has resulted in substantial progress in improving the government’s standards regarding the treatment of tigers and other endangered animals in captivity.

Brittany Peet is the Deputy General Counsel for Captive Animal Law Enforcement for the PETA Foundation, and works on behalf of animals who are held captive in roadside zoos, traveling shows, and the film and television industries through legal and regulatory actions and public advocacy campaigns. She also negotiates and coordinates wild and exotic animal rescues for PETA, and has overseen the rescues of more than 400 chinchillas, 73 bears, 75 big cats, 13 chimpanzees, and two baboons.

The graphics for the OHH podcasts are created by the wonderful Laurie Johnston of Two Trick Pony. Don’t forget to also listen to the award-winning,  weekly signature OHH podcast — now in its eleventh glorious year!

Episode 59: “Concern should drive us into action and not into a...