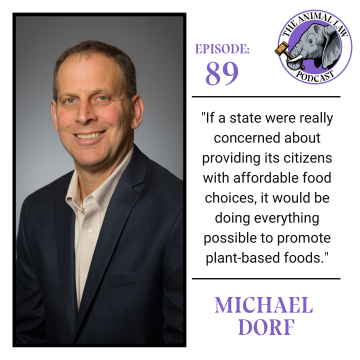 On this episode I will be discussing a case that a lot of you have no doubt heard of, and that is National Pork Producers Council v Ross, which was recently argued in the Supreme Court. This case brings into question the constitutionality of Proposition 12, something else which many of you may be familiar with, by which California set certain limits on the sale of pork that is derived from pigs whose mothers were subjected to the particular torture of gestation crates – the very tiny metal enclosures where they are kept during their pregnancies. The thing that many of us may NOT be so familiar with is the constitutional issue at play here, that is, the application of the Dormant Commerce Clause. If that is, at best, a vague memory from law school, you have come to the right place. My guest today is Michael Dorf, who is a renowned expert in constitutional law and a vegan advocate for farmed animals everywhere. He is going to break down for us what the Dormant Commerce Clause is, why it’s dormant, and what the Justices of the Supreme Court seemed to be most interested in when they recently heard this case.

*We are thrilled to expand the accessibility of our podcast by offering written transcripts of the interviews! Click here to read Mariann’s interview with Michael Dorf.

Michael C. Dorf is the Robert S. Stevens Professor of Law at Cornell Law School, where he teaches constitutional law, federal courts, and related subjects. He has authored or co-authored six books (including, with Sherry Colb, Beating Hearts: Abortion and Animal Rights) and over one hundred scholarly articles and essays for law journals and peer-reviewed science and social science journals. His most recent work of scholarship (co-authored with Sherry Colb) is “If We Didn’t Eat Them, They Wouldn’t Exist”: The Nonidentity Problem’s Implications for Animals (Including Humans), in The American Journal of Law and Equality. He also frequently writes for the general public. In addition to occasional contributions to The New York Times, USA Today, CNN.com, The Los Angeles Times, and other wide-circulation publications, Professor Dorf has been writing a bi-weekly column since 2000 and publishes a popular blog, Dorf on Law. Dorf received his undergraduate and law degrees from Harvard. He served as a law clerk for Judge Stephen Reinhardt of the U.S. Court of Appeals for the Ninth Circuit and then for Justice Anthony M. Kennedy of the U.S. Supreme Court. He maintains an active pro bono practice mostly consisting of writing Supreme Court briefs. 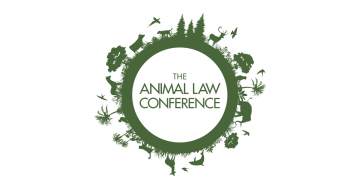 This episode of The Animal Law Podcast is brought to you in part by The Animal Law Conference. Co-hosted by the Animal Legal Defense Fund and the Center for Animal Law Studies at Lewis and Clark Law School — this year’s conference marks the thirtieth anniversary of this premier animal law event. Save the date for November 4-6, 2022!

The Animal Law Podcast is proud to partner with The Brooks Institute for Animal Rights Law and Policy, Inc., a US-based national independent think tank pursuing a paradigm shift in human responsibility towards, and value of, non-human animals by advancing animal law, animal policy, and related interdisciplinary studies.

The Brooks Institute for Animal Rights Law and Policy, Inc is dedicated to producing and disseminating outstanding, independent, academic, and public policy research and programming; and pursuing projects and initiatives focused on advancing law and policy pertaining to animals.

More information can be found at thebrooksinstitute.org/naalc-2022

You can listen to the Animal Law Podcast  directly on our website (at the top of this page) or you can listen and subscribe on iTunes or your favorite podcatcher. Also, if you like what you hear, please rate it on iTunes, and don’t forget to leave us a friendly comment! Of course, we would be thrilled if you would consider making a donation, or becoming a member of our flock (especially if you’re a regular listener). Any amount is hugely appreciated and Our Hen House is a 501(c)(3) nonprofit organization, so it’s tax-deductible. Thank you for helping us create quality content!

Animal Law Podcast #16: Michael Jasny and A Case Against Sonar

The Family that Saves Together w/ Zoe & Sherstin Rosenberg

Episode 208: “The further a society drifts from the truth, the more...

Episode 182: “There comes a time when speaking one’s mind ceases to...