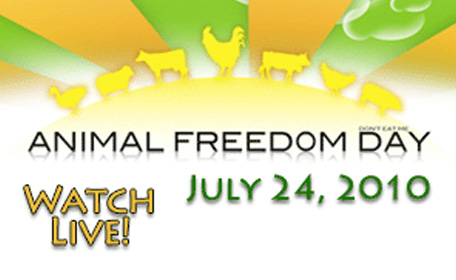 Eighteen-year-old activist Nadia Masoudi is working toward a vegan world, which she hopes will happen “sooner than 2375.” On the path toward that ideal world, Nadia is currently spearheading Animal Freedom Day, which is set to take place on July 24, 2010. According to Nadia,

“Animal Freedom Day is an event which aims to creatively tackle the ongoing topic of animal rights. It is a day in which people from all walks of life cease to consume animals or animal by-products. Our goal is to create awareness and put an end to the slaughtering of animals, animal abuse and create an alternative food source. Animal Freedom Day is a multi-venue music festival that will be streamed live online for the world to see. It will feature many performances from independent music artists to legendary music icons. Many high profile celebrities, environmentalists, politicians and several others from around the world will take part and have their voice heard to free the animals.”

Nadia initiated Animal Freedom Day during the production of her documentary film, Don’t Eat Me, which explores the morality of why people consume animals.