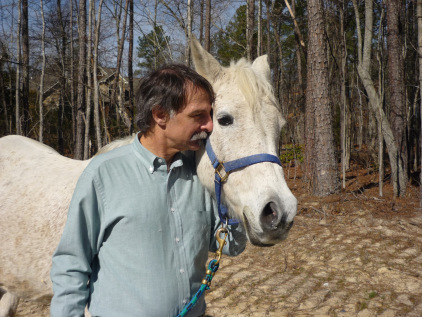 What is the role of history in contemporary art and activism? In what ways can the past shape or challenge dominant ideas about animals? Two recent works by Canadian media artist Donna Szoke demonstrate the power and potential that rethinking animal histories holds for current activist practices. Through contemporary media technologies, Szoke asks viewers not only to rethink the history of specific animals, but also to reflect on how their lives and deaths can be a catalyst for new ways of seeing and relating to animals in our contemporary times.

Invisible Histories (2012) is a piece that focuses on animals killed in the name of scientific research. Specifically, it is a response to the contents of the Niagara Falls Storage Site (NFSS), a repository for radioactive waste generated in the mid-20th century. Among the “waste” shipped to NFSS were the bodies of thousands of animals who had been given injections of plutonium as part of atomic weaponry research conducted at the University of Rochester. This so-called Rochester Burial included 280,000 mice. When Szoke learned about the NFSS, located a short drive from the American side of Niagara Falls, she was struck by the staggering number of animal bodies buried there. “What would 280,000 radioactive mice even look like?” she wondered. Invisible Histories is a project that is intended to answer this question and, in so doing, asks viewers to confront not only the fate of these particular mice in this particular landscape, but also the processes through which animals are so frequently rendered invisible in our society. 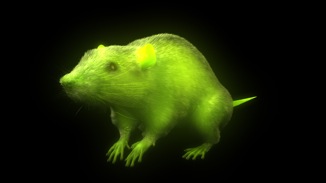 Szoke created this project to confront this idea of animal invisibility as well as to provoke more questions. Invisible Histories is composed of a 3-D animated, digitally rendered, glowing green mouse reproduced 280,000 times. In a gallery setting, this piece takes the form of a video of a seemingly endless loop of mice running across the projection surface located along the baseboards of the gallery wall. Many people do not notice the mice at first – we are no more accustomed to viewing art at floor level than we are to paying attention to the fate of the countless animals who have lived and died in laboratories around the world.

The lives, deaths, and burial of these 280,000 mice were shrouded in secrecy. They were rendered invisible, something Szoke attempts to counter with this work. She sees this piece as “a way to apologize, to collectively hang our heads and wish for forgiveness.” Her hope for Invisible Histories is that the “280,000 iterations of this one glowing mouse will go some way towards a collective re-imagining of these tiny beings. It invites the viewer to visualize other historical outcomes, and hopefully by extension, other presents, and other futures.” In other words, this piece does not stop with these mice whose lives were taken from them all those decades ago. Szoke sees an important connection existing between this history and the choices we collectively make today.

Another recent work by Szoke is a piece called Alfred Waits, a looping video of an animated horse meant to represent Alfred, the horse ridden by Major General Sir Isaac Brock, an officer in the British Army during the War of 1812. While there have recently been many commemorations of this war between the United States and the British Empire, which included, of course, Canada, with this piece Szoke turns our attention to an often forgotten aspect of armed conflict – the animals who serve alongside soldiers.

On October 13, 1812, General Brock was killed in battle, but Alfred was temporarily spared. Another British soldier, Lieutenant Colonel John Macdonell, took command after Brock’s death and rode Alfred into battle later that same day. This time, Alfred was not so lucky and was killed in action. Today, bronze memorials for both General Brock and Alfred can be found in the Niagara landscape. Unlike the lab mice buried at the NFSS, Alfred has not been forgotten, although his role and story are typically presented as a footnote to those of his human companions. In this instance, then, Szoke’s piece is not about making the invisible visible. Rather, she asks us to imagine alternate scenarios for Alfred. What would have happened if Colonel Macdonell had not ridden Alfred back into battle? What if Alfred had run away? What if Alfred was still stoically and patiently waiting for General Brock’s return?

Like Invisible Histories, Alfred Waits brings history into the present through contemporary media technologies – as Szoke describes, this is “an imaginative engagement with a very real history.” Alfred Waits is a site-specific piece, triggered by a quick response (QR) code located near the bronze memorial for Alfred. The resulting video that appears on the screen of a smartphone shows an animated, yet haunting, sketch of a horse in the very landscape the viewer is standing in, the very landscape that Alfred was killed in. This piece asks us to consider the role of animals in human warfare, but also asks us to think about what this specific horse may have experienced in this specific location on that specific day. Did Alfred wonder what happened to General Brock? Was he frightened? Was he bored? Obviously we will never know the answers to these questions, but this piece foregrounds the sentience, agency, and emotional lives of animals in a way that may lead to further reflection about those we continue to share our lives with. For example, the model for Alfred is a horse named Floyd, a resident of the Last Chance Horse & Pony Rescue. In her artist statement about Alfred Waits, Szoke contrasts the compassionate efforts of this sanctuary with the ongoing and controversial issue of horse slaughter in Canada. In other words, we are asked to carry forward empathy we may feel for Alfred, and situate it in our contemporary circumstances.

Through the process of making these histories visible for viewers in the 21st century, Szoke raises important questions about our relationships with animals in our contemporary times. The distance of history often opens the door for critical reflection. How will we choose to respond to the stories of Alfred and the 280,000 mice? Will we allow history to repeat itself?