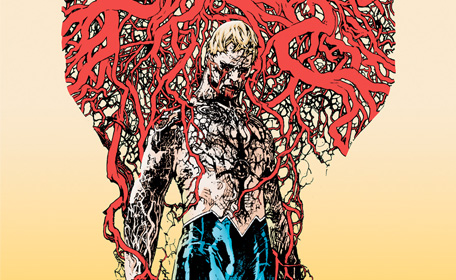 Neither of us is a true comic book aficionado, but both Jasmin and I just did a double take when we heard about Animal Man. This is an old character with a new life, as author Jeff Lemire just started working on new issues this past year. And, happily, Lemire decided to retain the crucial aspects of main character Buddy Baker, i.e., that he’s an animal rights activist and a vegan (actually in the old series from back in the 80’s, by Grant Morrison, he was called a vegetarian, but, hey, times change).
Of course, Baker has other, less interesting characteristics as well, like the fact that he can morph into various animals and assume their powers. Those powers come in handy, because he lives in one dark, nasty world. In fact, Baker is forced to take his family on the run after he discovers that his daughter Maxine, who has inherited his talents, is the avatar of The Red, the force which sustains all animal life, and that agents of The Rot, the elemental force of decay, want to kill her. 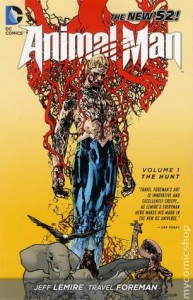 This new iteration of Animal Man has apparently been a huge hit, and DC Comics has just issued a compilation of the first 6 issues — which you can get on Amazon for about eight bucks (we just ordered it, so expect a podcast review sometime soon). I’m totally excited about this. You never know where caring about animals might take you, but I didn’t really expect it would mean I would get to read comic books.
Share 0 FacebookTwitterPinterestEmail
previous post

Episode 126: “Today’s problems cannot be solved if we still think the way we thought when we created them.”