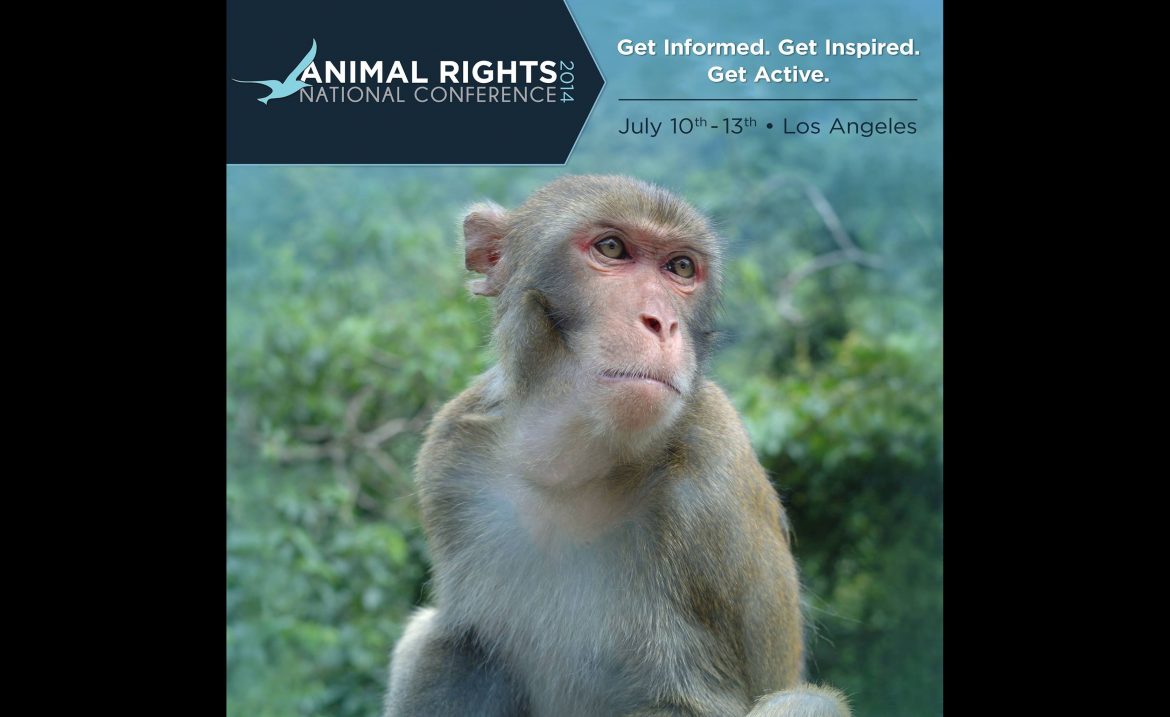 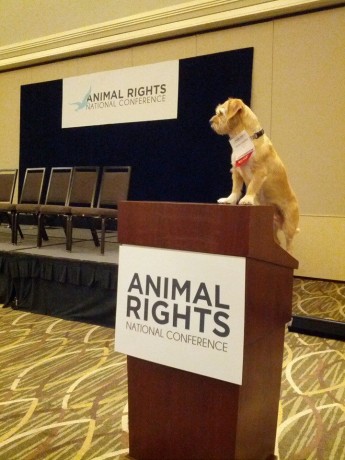 The annual Animal Rights Conference, informally known as AR 2014, was held in Los Angeles last month. It hosted more than 100 speakers and this year attracted record attendance (I heard between 1200 and 1300). According to organizers Farm Animal Rights Movement (FARM), nearly half of the attendees at the opening plenary raised their hands when asked if this was their first AR conference. I sat down with a couple of first-timers, a more experienced conference-goer, and a long time leader in the movement to get their perspectives on the event.
Jenna and Kevin
Saturday morning, my husband and I had breakfast with a delightful young couple from Winnipeg, newbies to the animal rights conference. Jenna and Kevin are in their early twenties and are both vegan. Kevin told me he was mostly vegan from the age of twelve. He had lived around animals as a kid, but it wasn’t until the day he bit into a piece of chicken and identified a stringy, whitish vein that he made the connection between the animals he knew as companions and the animal flesh he was eating. A few years later, he read Jonathan Safran Foer’s book Eating Animals and that sealed the deal.
When he and Jenna started dating, he capitalized on her appreciation of Foer’s other books and asked her to read Eating Animals. She did, and from that time on, Jenna was vegan, too. Both of them have followed the work of Toronto Pig Save and other animal protection organizations, but didn’t know of any opportunities in Winnipeg to get involved at the grassroots level. They came to the conference looking for ideas. Said Kevin, “We were hoping not just to gather information, but also to find the confidence to do something ourselves.” He looked forward to meeting some of the leaders in the AR movement, declaring, “That’s who I want to be.”
Jenna’s highlight moment was at the first plenary, where attendees gathered at the start of the three-day conference. She looked around and thought to herself, “This is crazy! Are these people all vegan and all activists?”
The likely answer was … yup. I recall the same feeling at my first conference. When awareness of the intense suffering of animals rises to consciousness, it can lead to a sense of isolation. It’s one thing to seek out other like-minded individuals and connect one-on-one, but it is a profound experience the first time you find yourself in the middle of a room filled with people who share that understanding.
Christopher
That sense of community is what brought Christopher Locke to the conference this year. Chris is no stranger to the AR movement. He’s married to Jaya Bhumitra, who heads the Los Angeles office for Compassion Over Killing. Like many, he finds the camaraderie of fellow advocates and vegans to be rejuvenating. Chris has found his advocacy in his writing. He quit his job this year to write young adult fiction that shines a light on animal suffering. His adventure story Persimmon Takes on Humanity is due for release in January. I asked Chris if he thought it was necessary to water down the abuse to animals for young readers. He looked a bit puzzled for a moment, then responded simply, “No, kids should know what’s going on.”
One of the more memorable sessions for Chris was the panel in which two undercover investigators spoke about their experiences. I’d have to agree with him on that, particularly listening to the stories of TJ Tumasse, who worked undercover at a number of factory farms and slaughterhouses. TJ described himself as strong, physically and emotionally, which is why he thought he’d be a good undercover. Yet he had to fight off the tears as he recounted the horrors he had witnessed in one factory farm after another. He drew us in with such honesty and deeply felt emotion, there wasn’t a dry eye in the room. Indeed, Chris confessed to me that he tried to rein in his feelings, but in the midst of such a simpatico group, he wept for all the abused animals.
Michael
I also caught up with Michael Budkie, co-founder of SAEN – Stop Animal Exploitation Now. Michael would be the last one to see himself as an AR “rock star,” but after twenty-five years of relentless activism, he is unquestionably a movement leader. He and his wife Karen document and expose what goes on in testing labs and the unfathomable, unnecessary cruelty to primates, dogs, rats, mice, pigs … the list goes on. They’ve been to many conferences and even run their own, and no doubt they’ve heard many of the same speakers on other occasions. So for Michael and Karen, attending the AR conference is all a part of taking care of business. 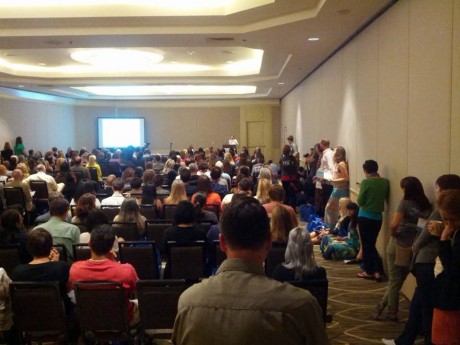 This year, Michael told me he was excited to see the show of hands from an impressive number of first-time conference attendees. He looks to this event as an opportunity to connect with new activists like Kevin and Jenna. As he pointed out, there aren’t many places to reach over a thousand curious and motivated people in a single weekend, so he relishes his chance to speak on some of the panels and meet potential supporters at the SAEN exhibit.
The highlights for me? Connecting with so many folks who share my desire to help animals. Putting real faces to people I’ve only met on Facebook. Stopping mid-sentence to give a hug to a good friend. Meeting new people that I hope to see again next year. The American Heritage Dictionary defines “movement” as a large-scale organized effort. And for four days I am swept up in the feeling of being part of the movement that will one day change the world for all animals.
Share 0 FacebookTwitterPinterestEmail
previous post

A lamentation of Swans

Episode 223: “Hell is empty and all the devils are here.”