Maybe you saw the news story: “Animal activists take over Tel Aviv’s Rothschild Boulevard,” declared the Jerusalem Post.
Needless to say, it’s inspiring to learn that these activists had a wildly successful animal rights demo in Israel. We’ve heard  that animal rights and veganism have really taken off there (and we’re looking forward to talking about that with Israeli activist Yossi Wolfson on the podcast next month). This demo was clearly an outgrowth of that. It’s invigorating.
But let’s take a second to consider what really happened here. By conservative estimate, two thousand people showed up in Tel Aviv to stand up for animals. (In fact, it was probably more like three thousand.) Sister demonstrations, albeit much smaller ones, were held in 40 locations all over the globe, from London to San Francisco, Moscow to Costa Rica. If you’ve ever been a part of organizing an animal rights demo, you know that getting just 200 people to show up is an huge achievement. So how did this amazing outpouring of solidarity come about?
Was it due to the work of an experienced animal rights organization that has been doing this for years? Well, no. In fact, the first demonstration was all started by Asaf Harduf, an Israeli attorney who has been involved in animal activism for less than a year.
Did Asaf have access to an incredibly sophisticated web tool that allowed him to find and interact with like-minded people and get them on board? Well, yes. It’s known as a Facebook page. You may have heard of it.
What were some of the other ingredients for the success of these demos?

Ori Shavit, another organizer, also poured his heart out at the event:

They have no voice, but have a soul. They have no words, but have feelings. Just like us, they want and need to live. Not being caged, enslaved and abused in any conceivable way by human imagination – they aren’t items of clothing, amusement products, invading species, walking testing laboratories. They’re only one thing – animals. They own their lives and we should remember that, respect that and return that to them. Not only because we have to, but because we, who have the voice and the power, can.

I am truly impressed. 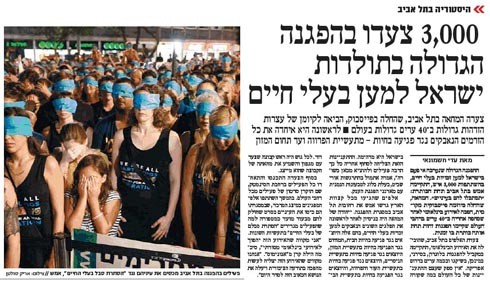 While this demonstration may not have had a specific policy goal, it is certainly capable of achieving enormous change. In fact, it is impossible to overestimate the kind of impact that participation in this kind of outpouring of love — and sharing of grief, and purpose — can achieve.
Asaf explained that he only recently “realized how fulfilling it is to stand with other people who believe with all their heart that animals should have their life and freedom.”
For me, this is the true value of getting out on the street and carrying a banner. Solidarity with others who feel the same way about animals gets into my soul, and strengthens my resolve. I hope to see more and more of this effort, until there are more of us out on the street than there are inside watching.

Episode 190: “Some people talk to animals. Not many listen though. That’s the problem.”