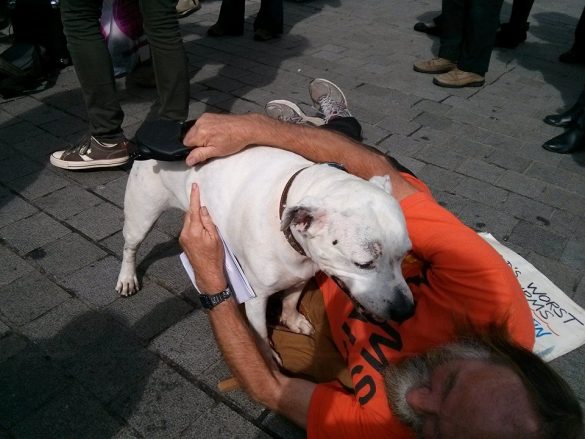 War certainly claims a multiplicity of lives, and has a sinister habit of rendering invisible those deaths. In this Throwback Thursday article, U.K.-based activist Kirsten Bayes sheds light on one group commonly forgotten as the victims of war: non-human animals exploited to test weapons and other equipment.
This article originally appeared on Our Hen House on February 12, 2014. If you’d like to see a certain OHH article resurrected, email us at info [at] ourhenhouse [dot] org.
***
I first fell for activist Kirsten Bayes on Twitter. There is just something so compelling about the way she makes her point in 140 characters or less. We quickly started corresponding – which is one of the major perks of my “job” (I meet the best of the best out there, all with the common goal of ending animal exploitation). Throughout our interactions (we had now graduated to email), I quickly learned that she is not only a golden tweeter, but Kirsten is a tremendous activist based in the U.K. – fighting for social justice since the early nineties, focusing (most recently) on anti-arms trade and pro-animal advocacy.
During a recent email exchange, she mentioned that “Two direct action campaigns became my life this last year: “Stop the Badger Cull,” vs. the shooting and trapping of badgers in England, and “Stop the Arms Fair,” vs. arms trade marketing in London. Both have been great fun, very successful in terms of coverage and impact on the ground, and a privilege to be involved with.”
Well. I wanted to know more. I mean, don’t you?! Lucky for all of us, Kirsten is sharing her thoughts with us today on “Animals as the Victims of Militarism.” Be sure to read down to the bottom, where she shares her tips on what can we as activists do about the effects of war on animals.
***
Animals as the Victims of Militarism: “In wars, not of their making” (-Linda Bodicoat)
by Kirsten Bayes
I often think that the road between Andover and Salisbury in Wiltshire, England forms a boundary between two worlds. 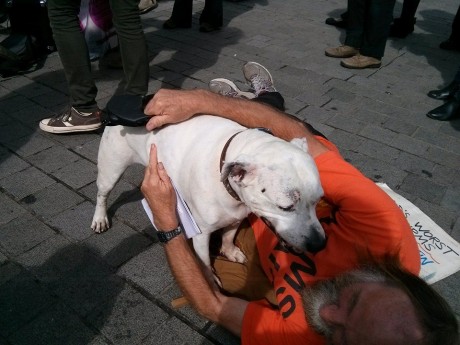 A left turn takes you down into the villages of Winterslow and Nether Wallop, a world of thatched roofs, grazing sheep, and country pubs. Turn right, and the road rises quickly, to reveal a wind-swept, scrubby heath dotted with tank traps, bunkers, and signs that read: “Ministry of Defence Property. Danger. Hazardous Area.” It leads to one of the world’s most secretive military facilities: a laboratory that conducts animal experiments, some of the harshest ever devised.
Some 28,000 animals – marmosets, monkeys, pigs, guinea pigs, rats, and mice – lived and died during the three years to the end of 2012 in the Defence Science and Technology Laboratory, DSTL, better known as “Porton Down.” The animals were gassed, infected, shot, and in the case of pigs, blown up, many in experiments described as causing “substantial” pain and “significant and prolonged” suffering.
These animals and more than 350,000 like them in U.S. facilities have been made part of the $300 billion global system that produces and markets weapons and equipment for the world’s militaries. The effect of every new weapon is tested. Every advance leads to the development of counter-measures, whether blood clotting chemicals or body armour. In each case, animals are typically chosen as the test victims. Even those “saved” by the techniques are then dissected and killed. There are no survivors.
The exploitation of animals for military purposes has a long history, from the use of horses for chariots in the Bronze Age, through the World Wars of the 20th century. Widely used in World War I for transportation, eight million horses perished on the Western Front, along with millions of mules, dogs, pigeons, and other animals used in the conflict.
Even today, horses, mules, and camels are still used to transport fighters and equipment over mountainous or desert terrain, and dogs are used to detect explosives and guard bases. They face the same dangers as their human handlers, being both deliberately targeted and accidentally affected by bullets and explosions.
As well as animals used in the fighting, domesticated animals in war zones suffer terribly. Reliant on humans to survive, when their carers flee or are killed, many die slowly from lack of water or food. During the 1991 Gulf War, one of the first where animal casualties were systematically calculated, 80 per cent of the animals on farms in Kuwait perished before hostilities ceased: as many as 800,000 animals.
Yet domesticated animals are not the only animal victims of war. Textiles from pre-war Afghanistan in traditional designs often pictured local animals: deer, gazelles and waterfowl all featured prominently. Current designs are now as likely to feature helicopters or tanks. Just as they have disappeared from carpets and cloth, many animals have gone missing in real life. Siberian cranes, Indian gazelles, Bactrian deer, are all endangered. The disruption to habitat from military activities, subsistence hunting when no other food was available, and commercial exploitation (both for food and for exotic pets) have all taken their toll. 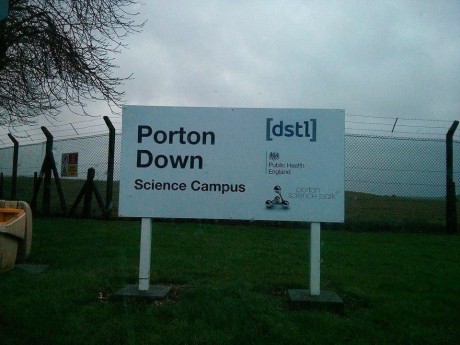 Sign outside Porton Down in Wiltshire, which kills ca. 9000 animals per year

It is a pattern repeated in other current and former war zones. Chimpanzees and gorillas in the Congo find themselves under severe threat. As refugees, militias, and employees of unscrupulous logging and mining corporations have moved into their highland home, the demand for “bush-meat” (meat from forest animals) has exploded. Previously forbidden by custom, chimpanzee meat has become a delicacy.
Armed conflict itself is now increasingly being funded by poaching. The demand for ivory and rhino horn, combined with the availability of weapons for anybody with the cash to buy them, is creating bad results for people and animals.
In East Africa, militias in Sudan are moving to control the ivory business, and are thought to be responsible for the slaughter of thousands of elephants every year, including animals in other countries as far west as Cameroon. Much of the demand for ivory comes from China, and so do many of the weapons purchased with the money from the trade.
In the Congo, Uganda, and Somalia, it is the same story, as armed groups use the profits from killing thousands of elephants to pay for their activities. Corrupt officials look the other way as tusks from murdered animals are shipped overseas. Much of the ivory eventually arrives in America, the second biggest importer. Although legally the product can only be sold if it is “aged”, it is hard to tell the difference.
So, from leafy Wiltshire to the Sudanese desert, animals are dying horribly in their tens of thousands every year from the effects of war and militarism. It is time animals stopped having to live in the violent world human militarism has created. Another world is possible. We just have to change direction.
***
Are you wondering what can we as activists do about the effects of war on animals? It can feel overwhelming. “I am so busy campaigning for animals, can I really work on world peace, too?”
Well, why not combine the two? Here are my three suggestions:

You may also want to investigate groups like Food Not Bombs (and here in the UK, Veggies), who say no to militarism and yes to healthy vegan food.
*** 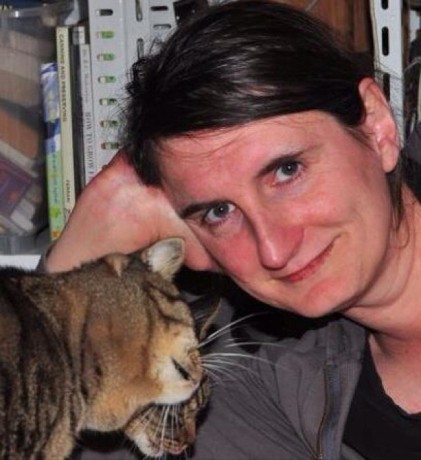 Kirsten Bayes is a campaigner with Stop the Arms Fair, a coalition of groups and individuals who work to stop arms trade events in London. A veteran activist, her campaigns have been featured on the BBC, Russia Today, Al Jazeera and (she is very proud of this) Fox News. A marketing consultant by profession, much of her spare time is spent in the countryside watching animals, especially badgers.
Share 0 FacebookTwitterPinterestEmail
previous post

Episode 276: “Whenever people say ‘We mustn’t be sentimental’ you can take it they are about to do something cruel. And if they add ‘We must be realistic’ they mean they are going to make money out of it.”