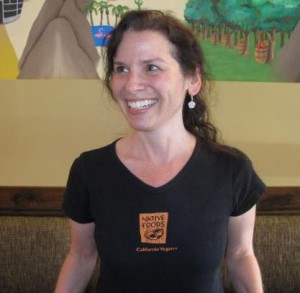 We at Our Hen House are delighted to again serve as media partner to The Pollination Project, to bring you their Unsung Vegan Heroes program. We are honored to be a part of these awards, renamed this year in memory of the amazing activist Lisa Shapiro, who devoted her life to working toward a better world for animals, with humility and kindness.
***
The Lisa Shapiro Award for Unsung Vegan Heroes
by Alissa Hauser, The Pollination Project
When Lisa Shapiro received the email that she had won an Unsung Vegan Hero award last fall, she was in shock. Her first reaction was, “If the definition of ‘Unsung Vegan Hero’ is that the recipient doesn’t think they deserve it, then I am perfect for it, because I really don’t deserve it. I don’t do that much!”
When Lisa then learned that her nomination was from none other than Ingrid Newkirk, founder of PETA, she was convinced it was a mistake, and that Ingrid must have meant a different Shapiro.
That was Lisa Shapiro in a nutshell: A humble, quiet powerhouse who spent nearly 3 decades building a network across the animal rights movement. An activist who launched one of the most robust vegan communities in the U.S. — the Boulder Vegan Meetup — which now boasts almost 1000 members. A compassion warrior who dedicated her life to advocating for animals and building vegan brands. Yet Lisa never asked or expected to be acknowledged or celebrated for any of it.
Not long after winning the award, Lisa was diagnosed with cancer. She passed away in June, 2015.
Lisa was the best definition of “Unsung Vegan Hero” we know. Our movement has lost a true friend, a champion, and — as Seth Tibbot of Tofurky called her in his tribute to Lisa — a vegan saint.
Before she passed, we at Pollination Project had the chance to tell her that the Unsung Vegan Hero Award would be renamed in her honor, and would celebrate her legacy for many years to come.
The Pollination Project is proud to rename the Unsung Vegan Hero Award in Lisa’s memory. The Lisa Shapiro Award will recognize the quiet superheroes of our movement: people who work humbly behind the scenes, creating a world where animals do not have to suffer at the hands of humans. Starting in 2015, The Pollination Project will offer no-strings-attached awards of $1000 each to ten unsung vegan heroes, all in Lisa’s name. Winners will also receive a $100 donation made in their honor to any animal charity of their choice, as well as some other fun vegan surprises.
Nominations will open on the Pollination Project’s website on July 12, and close on August 12, with winners being announced here at Our Hen House on October 1, 2015.
Be sure to read about the inspiring recipients of the Unsung Vegan Heroes 2014, including Jingles, the unsung vegan activist who inspired it all.

Flock Only: Today’s Scoop from the Coop

Episode 493: Aysha Akhtar on the Neurology of Empathy