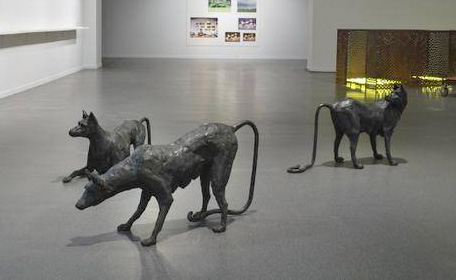 There is a real difference between art that is just portraying animals, finding ways to look at them as one of the interesting things that make up our world, and art that truly tries to convey animal reality. The latter is the kind of work that we are interested in here at Our Hen House — art that makes a political statement about who animals are, about what is happening to them, about what that all means, for us, but, more importantly, for them.
It looks like an exhibit organized by Canada’s Museum London and currently at the Dalhousie Gallery in Halifax, Nova Scotia, falls squarely in the latter camp. The description on the gallery website is a first clue that this is an exhibit that sets out to say something important about animals: “The meanings we impose on them are so multiplicitous and varied that we often forget that each species is distinct and every animal is an individual.” And according to a description in the Halifax Chronicle-Herald, the exhibit “is full of the wonder, devastation and potential in nature. Large-scale objects, from three fierce dogs to an enormous human skull of rusted stars, tell a story of human relations to animals. The objects are amazing and the stories are clear.”
In one work, Dagmar Dahle contrasts watercolors of extinct birds with those of ball gowns from 1500 to the present. There are hundreds of extinct birds and only a few gowns.
Lyndal Osborne’s Darwin & the Arc of Time: From Barnacles to Volcanoes, consists of a giant laboratory cabinet full of sea creatures, both real and constructed, such as sponges, corals, shells, kelp and shark eggs. It serves as a commentary on the act of collecting animals as specimens, and, according to curator Corinna Ghaznavi, brings up for consideration the human desire to “classify and control the natural world.” 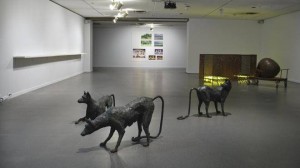 On the other hand, Tom Dean’s bronze sculptures of three free-standing female dogs, called Bitch Pack, is far from a portrayal of pets or animals under any sort of human control. According to Ghaznavi, the work “challenges our notions of the animal as object, obedient and complacent. Instead, it asserts the pack as an independent and fully embodied subject.”
Other works comment on the destruction of wildness embodied in humans carelessly allowing bears to feed on their garbage, and a portrayal of an experiment gone awry in which “the viewer is asked to position himself in this drama of tortured dogs and a god-like but dead human being.”
The exhibit will be up until December 2.

Dog is my co-pilot

Flannery in her whistle