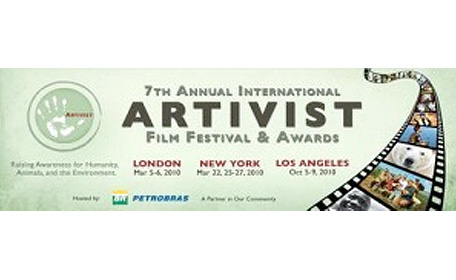 And according to Continental News, “several films awarded at Artivist have gone on to great acclaim, including Academy Award winner Born Into Brothels, and Academy Award Nominees Super-Size Me and God Sleeps in Rwanda. The festival has also presented the Los Angeles premieres of Fast Food Nation, Emmanuelle’s Gift, Stolen Childhoods, Zeitgeist, Zeitgest Addendum and Trudell.”

There are five categories in which filmmakers can submit their pieces. Animal advocacy is one of them, and according to Artivist, “a film submitted in the Animal Advocacy category must address the destruction, abuse, protection or rehabilitation of wild or domestic animals.”

The festival and Artivist awards will take place in Hollywood this October, where a highlight of the weekend’s festivities will include a star-studded gala — complete with a vegan menu! Following that, certain films will be chosen to tour to key cities, including NYC, London, Lisbon, Tokyo, Mexico City, and D.C.

The Artivist Film Festival makes me all tingly inside, particularly since animal and environmental rights are major focuses of the event (and in social justice — duh!), and the organizers have enough common sense and ethical prowess to serve planet- and animal-friendly food during their main event.