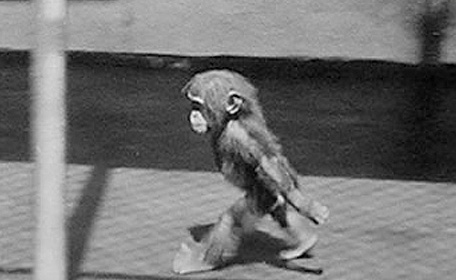 Perhaps you heard Dr. Lori Gruen interviewed on our podcast. Or maybe you read our recent blog entry about the graphic book she co-wrote with Peter Singer (illustrated by David Hine), Animal Liberation: A Graphic Guide. Could be that it was her most recent book, Ethics and Animals: An Introduction, which we reviewed last year, that caught your attention, as it caught ours. Or, more likely, the work of this scholar and activist — who has been enmeshed in animal issues for 3 decades (her CV is inspiring, which is really a gross understatement) — has just simply been on your radar. If, for whatever reason, it hasn’t, then we will go out on a limb and say that it’s very possible that her early work on the frontlines of animal rights, and her later work in academia, have, in a roundabout way, permeated your thinking somehow. 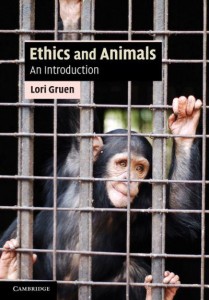 “Ethics and Animals: An Introduction” by Lori Gruen. Read this book!

It is for those reasons that we are delighted to welcome Lori Gruen to the Advisory Board of Our Hen House! Lori, who is Professor of Philosophy, Feminist, Gender, and Sexuality Studies, and Environmental Studies at Wesleyan University — where she also coordinates Wesleyan Animal Studies and directs the Ethics in Society Project, has published and lectured widely on topics in animal ethics (including her two aforementioned books).

Yet it is Lori’s most recent project that has us in absolute awe. She has documented the history of the first 100 chimpanzees in research in the U.S. — a website which recently won her an award at the Institute for Critical Animal Studies conference.

According to “The First 100” — which, trust us, you have to carve out time to read in detail — it was while doing research for an upcoming book on human relations to captive chimpanzees, that Lori became interested in the genealogy of chimps in the U.S. It goes on to explain:

R. M. Yerkes, a rather elaborate list maker, left behind many incomplete lists that Gruen began filling in while working through archival materials. One document in particular captured her attention — “Complete List of Chimpanzees: Yale Laboratories of Primate Biology.” The “complete list” contains: 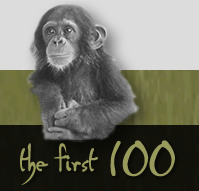 As she continued her research, Lori realized that the list was not, in fact, complete, and that 14 names were not yet on the list (as they had not yet been born when the first list was created, in 1925). In order to commemorate the first 100 chimpanzees, and to raise awareness about the plight of these glorious primates, Lori decided to complete the list as best she could.

It is estimated that currently there are less than 1,000 chimpanzees in research laboratories in the U.S. As the website explains, “Many of them are descendants of the original colony. Here we remember the first 100 chimpanzees.” Lori is currently working on another website which will document what she likes to call “The Last 1000.”

Here is a random example of one of the 100 first chimpanzees, as documented on “The First 100.” This is Fin. 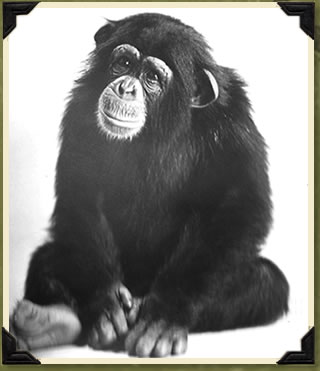 Fin died from dysentery or a virus. He was almost 5 years old. It is not uncommon for chimps, particularly youngsters, who are reared in home environments to get sick and die once returned to a laboratory setting.

Parents: Bokar and May

Also Known: Fin was raised in Dr. Glen Finch’s home to be cross reared “under conditions which should be especially favorable to the manifestation of such linguistic capacities as the animal possesses. This investigation is comparable in many ways with one conducted early in the history of the station by Dr. Winthrop N. Kellogg, in which he observed for several months, under natural and experimental conditions, a chimpanzee infant loaned to him by these laboratories [Gua] for the purpose and kept in his home in close association with his infant son.” In 1939, Fin developed pneumonia but was successfully treated and recovered. In 1940 the study was discontinued. There is no further explanation of why the study ended and there is no published report of the conclusions of the study.

This website, which is unlike any we’ve ever seen, takes a personal approach in that it puts a name, face, story, and family on the members of that original colony, the first 100. It’s this kind of connection that makes advocacy particularly effective, giving the reader a single story, a unique inroad into seeing this overarching issue through a keyhole. And “The First 100” is tragic not only in its reminder of the stunted, sad lives of these individuals subjected by humans to captivity and brutality, but it also is a stark and sad reminder of the fact that, due to human encroachment, these magnificent animals are so rare in the natural habitats in which they should be living. According to the sanctuary Chimp Haven, “All of the factors contributing to the endangerment of chimpanzees can be attributed to humans.” These include habitat loss, logging, bushmeat and hunting, mining, and human disease.

As we welcome Lori Gruen to our Advisory Board — where she joins Carol Leifer, Dan Piraro, Donny Moss, James E. McWilliams, and J.L. Fields — we are excited to also give you the opportunity to win a set of her books: Animal Liberation: A Graphic Guide, and Ethics and Animals: An Introduction. These books will enlighten, inspire, educate, and move you.

For your chance to win, comment below and give us your thoughts on “The First 100.” Was there a particular story that spoke to you? Do you have an opinion about the project as a whole that you’d like to share? Does it inspire you to act in some way? (And if so, how?) To double your chances to win, also follow Our Hen House on Twitter (@ourhenhouse). In your comment, include your Twitter handle so we can be sure that your entry is being counted twice. A randomly selected winner will be chosen in one week — April 11, 2012. You have up until that day, at midnight EST, to enter. And please spread the word about Lori’s groundbreaking work for animal rights, and about this contest. 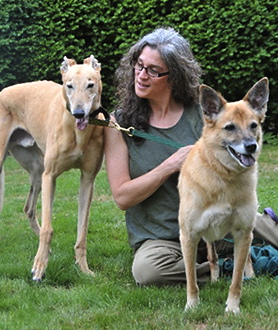