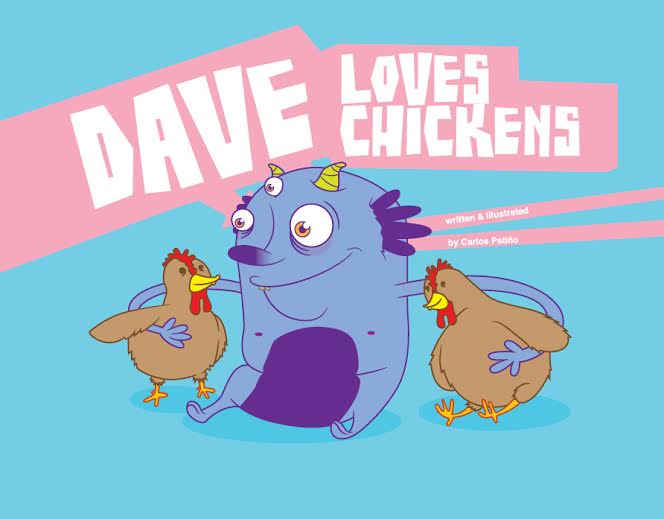 When one goes vegan, especially when it’s for the animals, the disparity of our treatment of various non-human animals becomes increasingly apparent. Why do some animals get toys and special beds while others are abused and killed under the industry’s label of “standard practice”? Some animals are beloved family members and some – who are just as capable of the sweet antics we cherish in dogs and cats – are considered products.
People who have stepped away from animal products sometimes try to communicate to others how perplexed they are about our inconsistent treatment of animals by speculating on the scenario of what a visiting alien might think of humans. When one looks at what we do to certain animals and how we justify it, it is downright odd, to say the least. How would someone outside our planet view us? 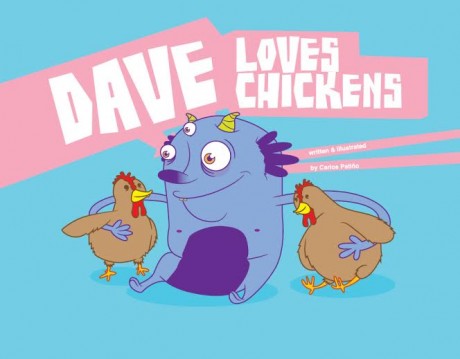 Dave Loves Chickens (Vegan Publishers, 2013)is a new children’s book that plays on such an idea with charm and humor. Author and illustrator Carlos Patiño introduces the reader to an alien whose name is so complicated that we are invited to “just call him Dave.” Visiting from a far-off planet, Dave is a large, three-eyed, purple monster who is brimming with love. He is also smart – he proudly removes the top of his head to show off his brain – and he would never dream of littering. And, as you might have guessed, he is very vocal about his meatless diet. All in all, a good guy, as aliens go.
Dave adores all animals and is confounded that anyone on Earth would think of eating their fellow Earthlings. As the title suggests, he is especially fond of chickens, and he loves to share little facts that show them to be remarkable beings in their own right rather than mere ingredients: they love dust baths, they live up to 11 years old, and they can travel nine miles per hour. Impressive! He points out that chickens are even related to the great Tyrannosaurus Rex!
Given how cool chickens are, Dave can’t figure out why eating them isn’t against the law, and his normally calm and loving demeanor changes to one of comical outrage when he contemplates this travesty. He even goes so far as to dress up as a police officer, in an attempt to outlaw the killing of his friends. On the closing pages, he snuggles up to two chickens underneath the words, “Chickens are great and they don’t belong on our plate.”
It is hard to argue with Dave’s persuasive arguments, which, notably, are presented in a mainly positive light. Mr. Patiño does not include illustrations of abused animals, aside from one image of a plate of animal products (something that, sadly, children are certainly accustomed to seeing). Nor are there images of battery cages or other upsetting visuals. Indeed, all of the hens depicted in the book are happy ones. That isn’t to say that such images detailing animal exploitation have no place in children’s books; they can and do foster positive discussions. But they are not present here, as this is Patiño’s mode of advocacy – and this positivity works well in his book.
The bold colors and the unexpected color combinations are fun and engaging – simple illustrations speak to the author’s background in graphic design. The illustrations are basic enough for a young child to enjoy and understand, and will likely be appreciated by adults as well. Both the words and pictures are quirky and sweet, important ingredients for a compelling children’s book.
According to the book jacket, this is the first story in a series. Each new installment will focus on a different species of animal, and why its members should be left off our plates. If these subsequent books are as enjoyable, entertaining, and instructive as Dave Loves Chickens, then readers are in for a treat. Through Mr. Patiño’s work, children will learn that every individual animal lives for his or her own sake, and that each one is just as interesting and deserving of life as humans.
Share 0 FacebookTwitterPinterestEmail
previous post

Do you still love me?

Episode 229: “Never forget that justice is what love looks like in...