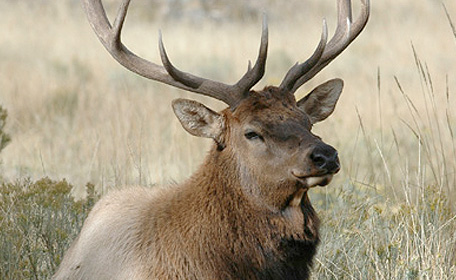 Today, OHH reviewer Katie Gillespie gives us her take on Exposing the Big Game by Jim Robertson. Toward the end of the review, we ask for your feedback on effective advocacy. We look forward to reading your responses!
***
Book Review: Exposing the Big Game: Living Targets of a Dying Sport by Jim Robertson
Review by Katie Gillespie
Did you know that bison engage in communal care of their young, that they are vegetarian, and that they are absolutely essential to the health of the ecosystem around them? Did you know that prairie dogs greet one another by kissing, that they build complex, underground, interconnected dwellings, and that they learn and invent words to add to their already complex language? Or that coyotes partner for life, that they parent together, and that their modes of communication are rich, varied, and cross species barriers? Tragically, bison have been driven to near extinction by hunting. Prairie dog populations have been all but erased by hunters for target practice. Coyotes have been vilified, trapped, poisoned and shot in overwhelming excess. Jim Robertson, in Exposing the Big Game: Living Targets of a Dying Sport [Earth Books, 2012], weaves a beautiful and heartbreaking story of animals living in the wild by using his many years spent observing animals as a wildlife photographer and nature writer. He tells us who the animals are, how they live, how they partner and raise their young, and how they are killed in overwhelming numbers by humans hunting for sport. 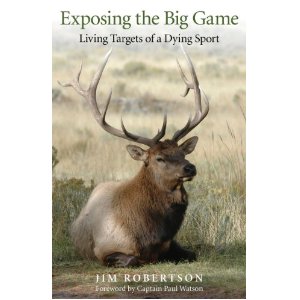 Focusing on specific species—bison, coyotes, wolves, ravens, prairie dogs, bears, and elk—Robertson traces the historical trajectory of how some have been all but wiped out by hunting. But he also tells how other species, like the coyote and raven, have managed to adapt to the threat posed by humans and have expanded their habitat to survive. Despite the fact that hunting is less popular than it has ever been, there is still a thriving industry in the United States that poses a threat not only to individual animals and their families, but to whole species as well.
I particularly appreciated Robertson’s explanation of the politics relating to hunting. At the level of state and federal government, hunting for sport is protected by Democrats and Republicans alike. Animals, like wolves, protected under the Endangered Species Act, are kept from harm only until their populations recuperate enough to be removed from the list, at which point they are hunted to near extinction again. This legal mechanism that safeguards animals in the wild just enough to prevent extinction is a glaring indication of the U.S. federal government’s stance on nonhuman animals—that they are, first and foremost, property and resources to be used for the benefit of humans.
This government stance on hunting is probably not particularly surprising. What is more shocking, however, is Robertson’s description of how the Sierra Club regularly comes out in support of hunting, arguing that hunting brings one closer to nature. In a move that would have the Sierra Club’s founder, John Muir, turning in his grave, the organization held a contest that asked participants to explain “Why I Hunt.” The prize for winning the contest was an all-expense-paid trip to Alaska for a ‘big game hunt.’ Reporting these kinds of truths, Robertson candidly reveals the contradictions of wildlife policy in the United States and the difficulty in making change when those in leadership roles are concerned with protecting their own interest in hunting.
Unfortunately, in spite of the wealth of information that this book provides, it runs the risk of being limited in its audience. In his introductory remarks, “Who Should Read Exposing the Big Game?” Robertson writes that the book is intended for hunters, non-hunters and anti-hunters alike. And yet, after reading his introduction, as well as the Foreword by Paul Watson, even I, a longtime anti-hunter, was ready to set the book aside. Within the first ten pages, Robertson and Watson managed to call hunters ‘ignorant, sadistic, heartless, impotent, perverts.’ I was troubled by this kind of aggressive tone taken up at the beginning. I would be surprised if a hunter read past the first two pages.
While I am deeply committed to taking a firm, radical stance against any and all kinds of animal exploitation, and I greatly admire the important work of both Jim Robertson and Paul Watson, I also believe that we should think carefully as animal advocates about what will open up the conversation rather than shut it down. I worry that this name-calling approach could limit the reach of the conversation and further polarize any debate over hunting. This is particularly unfortunate because the rest of the book contains a sensitivity to who these animals are, and what their lives are like, that would move most people—hunters and non-hunters alike—to rethink our relationship to animals in the wild. Coming from an anti-hunting perspective, I was outraged by the treatment of animals in the wild, and moved to think about what I could do to actively work to change hunting policy in the United States.
In spite of my mixed feelings about its approach, I am sincerely grateful to have read this book and would highly recommend it to those who want an introduction to the ethics and politics of hunting. First and foremost, it is an accessible and compelling indictment of hunting for sport in the U.S. It will outrage you and move you to action.
Interestingly, the book’s antagonistic approach also provides the reader with an important opportunity, i.e., it forces one to reflect on effective methods of advocacy for animals. If the aim is to reach folks who are already opposed to hunting and just need to have a fire lit under their behinds to do something about it, then this is a great read. But for hunters, who are steeped in a different kind of culture, a more nuanced approach might be needed.
This leaves me with a few questions for readers of Our Hen House: What methods do you think are most effective for reaching those whose minds we’re trying to change about animals? What role does our own emotion and outrage play in our activism and advocacy? And in the specific case of hunting, how might we succeed in opening a conversation about hunting between hunters and anti-hunters that might invoke real change moving forward?

Episode 126: “Today’s problems cannot be solved if we still think the way we thought when we created them.”