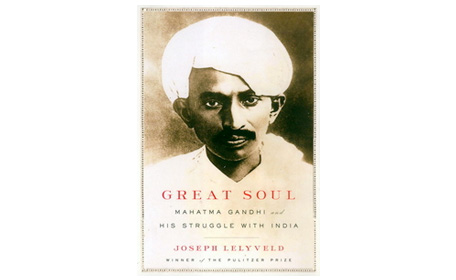 We are delighted to welcome Sangamithra Iyer as our guest reviewer today. Sangamithra offers an insightful review of Great Soul: Mahatma Gandhi and His Struggle with India by Joseph Lelyveld. 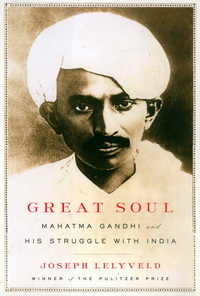 Great Soul: Mahatma Gandhi and his Struggle with India by Joseph Lelyveld

In 1893, a young Indian lawyer arrived on the shores of South Africa. He didn’t know then that he would stay for over twenty years, during which he would be confronted with injustices that would force him to continually challenge not only the law, but also himself. Nor did he know that what he learned in South Africa he would later adapt to a struggle for independence and equity in his home country. The opening pages of Joseph Lelyveld’s book, Great Soul: Mahatma Gandhi and His Struggle with India, provide a portrait of this activist as a young man:

“He wants his life to matter, but he’s not sure where or how; in that sense, like most twenty-three-year-olds, he’s vulnerable and unfinished. He’s looking for something—a career, a sanctified way of life, preferably both—on which to fasten.”

Despite what the title may suggest, Great Soul is not hagiography, documenting the life of a saint, but rather a well-examined account of the making of an activist. In a recent talk at the Asia Society in New York, Lelyveld was asked what gave him the nerve to choose Gandhi as his subject, when the Mahatma is such a big figure and the literature on him is already so vast. “There’s a Sanskrit word for it,” Lelyveld joked. “Chutzpah.”

Indeed there is a certain amount of chutzpah required to re-examine a well examined life, but Great Soul succeeds in tracking Gandhi’s work in South Africa and analyzing how it shaped the man who would become a national and moral leader in India. It is well researched and artfully guided by Lelyveld, who spent decades studying Gandhi’s life and letters, tracing his footsteps on both continents. What I appreciated about the book is its intimate portrayal of a very human, flawed and conflicted Gandhi — a man trying to find his way to change the world.

My interest in Gandhi is multifold. My grandfather was an engineer working for the British in Burma when he responded to Gandhi’s call for activists in the struggle for independence. He rid himself of worldly possessions and started a Gandhian ashram in a rural village in south India, where my father was born. I was always fascinated by Gandhi’s connection of the personal to the political and inspired by his example to “be the change you wish to see in the world.” In Great Soul, I found an account of Gandhi’s life that wasn’t simplified or glorified, but instead addressed the complexity of the activist and his work.

While Gandhi’s thoughts on vegetarianism and animal related issues are barely and only peripherally touched upon in Great Soul — (see Gandhi’s Autobiography and Tristram Stuart’s Bloodless Revolution for more on these topics) — Lelyveld’s documentation of Gandhi’s social justice work provides valuable insight and perspective to animal activists.

Indeed, in the Bloodless Revolution, Stuart notes that “vegetarianism was Gandhi’s first political cause; many of his earliest writings were articles in the journals of the Vegetarian Society [of London] and correspondences about his new vegetarian ‘mission.’” He never abandoned this seminal cause (and in fact was continually refining it), but he connected it to other efforts that eventually led to his role in Indian independence.

The Power of the Pen

When Gandhi moved to South Africa, his first activist deed was a letter to the editor. It was after he had been ordered by a judge to remove his turban in a courtroom in Durban, and the local newspaper published an article about the situation titled “An Unwelcome Visitor.” Lelyveld writes that “Gandhi immediately shot off a letter to the newspaper, the first of dozens he’d write to deflect or deflate white sentiments.” After his next racial assault, when he was ejected from a train’s first-class compartment because a white passenger did not want to be in the same area as a “coolie,” Gandhi sent telegrams to the general manager of the railway station raising enough of a ruckus to reboard the train in first class. (Later in his life in India, he would voluntarily only travel third class in solidarity with the masses).

In South Africa, Gandhi needed a platform, so he launched his own weekly newspaper, Indian Opinion. In need of a name for his nonviolent movement, because he felt “passive resistance” indicated a certain weakness, he held a contest in Indian Opinion. Through that process, the name satyagraha — truth force — was coined.

As is the case with all independent media, funding became a concern. Inspired by reading John Ruskin and Leo Tolstoy, Gandhi “found an answer to his immediate practical problem: he could save his paper by moving it to a self-sustaining rural settlement,” Lelyveld writes. “Workers on the farm were expected to double as pressmen and simultaneously feed themselves. Hand labor, thereafter, would be the reflexive Gandhian answer to various problems from colonial exploitation to rural underemployment and poverty.”

As a result, for Gandhi, the publication was not only a pulpit but became a way to show how he was practicing what he preached. A compilation of his columns from Indian Opinion would later become his Autobiography: The Story of My Experiments with Truth. Upon his return to India, Gandhi started another publication, Young India, and later while in prison, distributed The Harijan, a weekly newsletter aimed at getting rid of the caste system.

Gandhi was not a single-issue advocate. His views and philosophies were ever evolving but he understood the connections between all his causes, even when few others did. Lelyveld analyzes Gandhi’s work on his “four pillars” for swaraj (self-rule): Hindu Muslim unity, eradication of untouchability, revitalization of self-sustaining rural villages, and ahimsa, nonviolence. When I think about my grandfather’s work in the Freedom Movement, what it entailed was spinning cotton, providing water and sanitation to rural villages and fighting for caste equality. These tasks epitomized Gandhi’s pillars in function and in form.

Pyarelal, one of Gandhi’s biographers, documented one of his epiphanies in South Africa that ultimately led to the four pillars:

In India, Gandhi expanded his thinking further: “Only at that time can non-cooperation with an enemy nation become a possibility, when full cooperation between ourselves has been achieved.”

Working towards these goals had its challenges, and Gandhi was subject to a fair amount of criticism. He needed to fight untouchability in Hinduism yet still maintain a Hindu base for the independence movement and build that base without alienating Muslims in the process. Lelyveld poses the questions Gandhi faced:

“Could he simultaneously lead a struggle for independence and a struggle for social justice if that meant taking on orthodox high-caste Hindus, which would inevitably strain and possibly splinter his movement?… Granted that Gandhi did much to make the practice of untouchability disreputable among modernizing Indians, what exactly was he prepared to do for the untouchables themselves besides preach to their oppressors?”

As he struggled with these issues and his approach to addressing them, one thing Gandhi was sure of was nonviolence:

“I personally can never be a party to a movement half-violent and half non-violent,” he said, “even though it may result in the attainment of so-called swaraj, for it will not be real swaraj as I have conceived it.”

Gandhi’s ruminations on building bridges within and between movements and defining tactics and strategies must surely echo and resonate among animal activists today. They remind us that every movement for change has had strong dissension within its ranks and that without constant care and thoughtful leadership, could easily be torn apart.

Despite the many challenges facing him and India, Gandhi once said he was “not a quick despairer.” But there were moments when Gandhi realized, that despite his efforts, the four pillars to which he devoted his life were crumbling. Lelyveld writes about a very lonely and disappointed Gandhi when violence erupted around him:

“For India’s prophet of unity, nonviolence, and peace, these events—the overture for a year and a half of mass mayhem, murder, forced migration, property loss on a vast scale, extensive ethnic cleansing—provided ample reason for despair, enough to bring his whole life into question. Or so he seemed to feel at his lowest ebb. But if he was shaken, he clung ever more fervently to his core value of ahimsa, on which much of India seemed to have given up.”

Lelyveld captures the personal struggle Gandhi faced, committing himself to a life of activism. In 1921, Gandhi thought independence could be achieved in one year. And when independence came in 1947, it was heartbreaking. Gandhi witnessed the partition of his homeland, what he referred to as “vivisection.”

“The tragic element is that he was ultimately forced like Lear, to see the limits of his ambition to remake his world,” Lelyveld explains. And yet, Gandhi non-violently soldiered on. He veered at the end of his life, Lelyveld observes “between dark despair and irrepressible hope.”

Lelyveld points out that in South Africa today, “the vegetarian restaurant, steps away [from Gandhi’s law office] is long gone; hard by the place it stood, perhaps exactly on the spot, a McDonald’s now does a fairly brisk nonvegetarian trade.” And in India, Lelyveld writes, “The combination of piety and disregard [for Gandhi]—hardly unique to India—lasted as a cultural reflex surviving the explosion of India’s first nuclear bomb.”

When President Obama traveled to India last fall, he paid his respects to Gandhi’s memorial, but arrived with an economic agenda offering American meat, dairy and arms to the emerging superpower. Globalization, urbanization and modernization have shaped an India that is far removed from Gandhi’s vision of self-sustaining villages. Religious conflict and social inequality still plague India today.

What we may see now almost anywhere is not too dissimilar to what Gandhi discovered when he returned to India in 1915 and what ultimately drove his work. “I see around me on the surface nothing but hypocrisy, humbug and degradation, and yet underneath it, I trace a divinity.” We may be witnessing the erosion of Gandhian principles, but also their reincarnation. Perhaps it is in the nonviolent resistance movements in the Middle East, undercover investigations exposing the truth about how animals are treated, DIY efforts of self-sufficiency, or any time individuals realize that change begins with them, we find a trace of the Mahatma.

***
Sangamithra Iyer is an Associate for Brighter Green and the former Assistant Editor of Satya Magazine.