When Sangu Iyer, one of our favorite writers and humans, told us she’d like to review a book about pit bulls for Our Hen House, we were thrilled. Not only are Sangu’s insights and a talent of great value (her OHH review of Great Soul: Mahatma Gandhi and His Struggle with India is one of our favorites to date), but the plight of pit bulls is a topic close to our hearts. Our Rose would have it no other way.
***
Book Review: I’m a Good Dog: Pit bulls, America’s Most Beautiful (and Misunderstood) Pet by Ken Foster
Review by Sangamithra Iyer 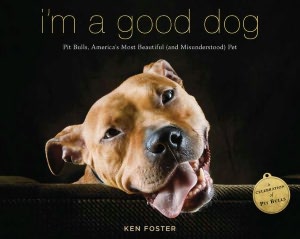 Almost seven years ago, a special girl named Moo Cow entered my life. Back then, I was new to the world of dogs and even newer to the world of pit bulls. A more experienced friend warned me about what would happen next: “You are going to fall in love.”
Ken Foster’s latest book I’m a Good Dog: Pit bulls, America’s Most Beautiful (and Misunderstood) Pet (Viking Studio) is a perfect book for those of us who have fallen in love with pit bulls to share with those who haven’t yet.
In the opening pages, Foster explains, “When you fall in love with a pit bull – and you inevitably will, if you meet one, fall in love – you need to be prepared to answer a lot of questions from skeptics on the street.”
Foster does a beautiful job in debunking the myths and misunderstandings about these maligned animals. “That is what we do when we truly love things, whether dogs or people or works of art. We want to show them off in the best possible light,” he writes. His descriptions of the dogs, their quirks, and personalities will resonate with anyone who has had the pleasure of their company. He describes their “ridiculously operatic voices,” their “hips swiveling like Elvis,” and their very attentive kisses. (Moo Cow was once described as a 45-pound kiss.)
His point is further illustrated with historical tidbits. Helen Keller and Dr. Seuss are among several notable figures who had pit bulls in their lives. Foster traces their image over time. Before getting the reputation of being vicious fighters, they were regarded as family dogs, protectors of children. Petey on The Little Rascals played that role.
Foster explains that the pit bull is not any one breed but can represent a wide range of dogs, and he discusses the senselessness of pit bull bans and breed-specific legislation. “A pit bull is American, and like most Americans these dogs are a jumble of DNA and contradictions.” He recently stopped by Denver on his book tour with copies of his book in hand to give to members of the Denver City Council, who have banned pit bulls in the city limits. His visit was particularly timely, just after a three-and-a-half-year-old pit bull named Chloe was shot to death by police officers in neighboring Commerce City.
At the Denver book reading, audience members came from outside the city limits with pictures of their exiled companions. These images told a different story about the dogs than what the city’s legislation suggested.
While Foster’s writing is engaging and serves pit bulls well, it is the photos in the book that truly illustrate the point that these dogs are “capable of expressing anguish and despair, as well as their euphoric joy in being alive.” I’m A Good Dog perfectly highlights the power of pit bull photographs, as it is gorgeously laid out and packed with beautiful images; it would make a great coffee table book.
Over the years, I’ve been curious how Foster’s life rescuing and caring for dogs has influenced his thoughts about human relationships with other animals. In 2006, I had the pleasure of interviewing him about his first memoir, The Dogs Who Found Me. Satya (the social justice magazine where I was working as an editor) hosted a book event for Foster at the NYC anarchist bookstore Bluestockings – followed by an after-party at vegan shoe store Mooshoes, and dinner at the vegan restaurant Caravan of Dreams. That evening became a chapter aptly called “The Vegans in New York” in a subsequent book, Dogs I Have Met and the People They Found.
“A group of vegans had invited me to New York,” Foster wrote, “and I was nervous about meeting them.” He admitted initially feeling “like part of a social experiment,” but later revealed that “the meal – and their company – was the best I’d had in weeks.”
He ended that chapter at an Easter brunch with friends where conversation shifted to a pit bull in Michigan who had adopted and raised a pig named PeeWee. “More than anything else, Foster writes, “PeeWee has been making me rethink my position … I don’t think I would be able to eat pork at all if I thought about the animal when I saw it on a plate.”
I love how it was a pit bull’s compassion toward another animal that inspired this reflection. What a good dog!
*** 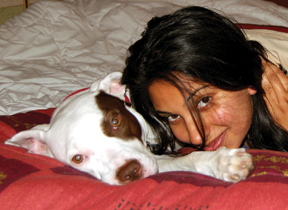 Sangamithra Iyer is an associate of Brighter Green, a vegan food columnist for Open City, and the former assistant editor of Satya. Her essays have been anthologized in Sister Species: Women, Animals and Social Justice, and Primate People: Saving Nonhuman Primates through Education, Advocacy, & Sanctuary.

New to Veganism? Read This! Inspirational Quotes From More Than 30 Long-Time Vegans

Excerpt from “Meatonomics: The Bizarre Economics of Meat and Dairy” — Plus...