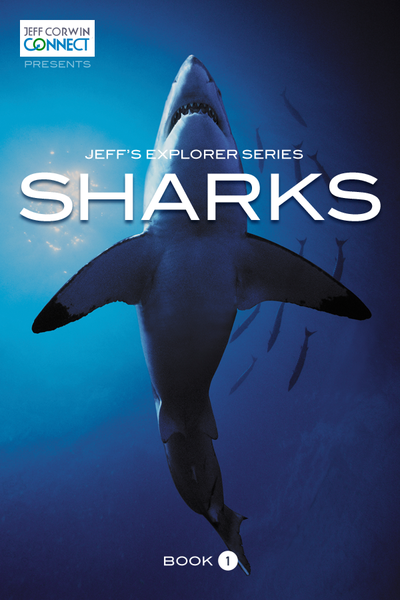 We’re delighted to welcome back to Our Hen House Jennifer Molidor, Ph.D., who offers her take on Explorer Series: SHARKS, by Jeff Corwin.
***
Book Review: Jeff Corwin’s Explorer Series: Sharks
Review by Jennifer Molidor, Ph.D.
Jeff Corwin’s multi-sensory book, Explorer Series: SHARKS, is the first in an exciting set of e-books that radicalizes popular animal studies for young people. Future books in the series will focus on primates, wild cats, penguins, and snakes. In this initial work, readers learn about sharks through pictures, audio clips, and a video narrated by Corwin that shows sharks in their natural environments.
Through these multimedia sensations, Corwin’s book speaks directly to the reader about the glories of sharks. Potentially new concepts like “apex predator” are clickable, and take readers to an easy-to-digest glossary. Chapters are cleverly arranged. Concepts like the evolution of sharks are presented for young readers (ages 10 or older) in a chapter called “The Great Great Great Grandparents of Sharks.” A particularly engaging chapter offers the ability to “Stump Your Friends with Shark True & False.” Each short chapter is jam-packed with valuable information.
My favorite chapter is “Shark Babies Have it Tough.” You don’t know sibling rivalry until you know sharks. While some sharks lay eggs, most shark species give birth to live babies called pups. These shark pups must battle to the death against their siblings in the womb. Only one will survive. So much for maternal comforts; we see that many of our assumptions about the way the world works are not true for the giants who swim among the seas.
Pages have “Fun Facts,” clickable terms built into the text, and stunning marine photography. These images not only dazzle the eyes but are so gripping as to seduce the reader into learning. Readers will no doubt frequently find themselves asking, “What is that?” In a chapter on ‘how sharks are made,’ a photo of an egg casing from a horn shark mother is “screwed” into rock crevices to protect it. It looks nothing like the animal eggs we are familiar with – but rather like a ridged turnip with dangling nylon cords: exactly the kind of thing that could be screwed into a secret crevice. How else does one hide babies in the vast blue seas?
These “Fun Facts” inspired in me a simultaneous desire to be cautious in the ocean (and rivers – sharks are found in fresh water, as far as 1,800 miles up the Mississippi River and 3,000 miles up the Amazon!) and to recycle household items more carefully. Some predatory sharks have teeth that can cut through steel, but that doesn’t mean it’s a good idea for them to do so. Stomachs of dead sharks have revealed boots, bricks, bottles, antlers, beer cans, and jars of nails.
It’s hard to write a sympathetic book about such frightening predators – some of whom possess jaws larger than a human torso. And yet, Explorer Series: SHARKS accomplishes that. Corwin explains that great white sharks have been decimated by 70% due to overfishing. While each year there are fewer than a hundred reported shark attacks on humans, Corwin notes, only a fraction of which are fatal, during that same year humans kill between 70 and 80 million sharks. In fact, there may only be 340 adult great whites left, which presents a serious danger to the ecological balance of our oceans. These sharks, who regulate seal populations by consuming dead or dying animals, also help prevent the spread of disease. The real strength of this e-book is that Corwin makes these important points easily understood for all readers.
That includes me. The early 1980’s saw a cultural period that terrorized our mythic landscape with shark lore. Residual figments of my Jaws-influenced fears of sharks remain, and I vividly remember those days when my younger brother would draw sharks obsessively, both enamored and fearful of their mighty power. But, as I know now, in reality, there are 400 species of sharks who have adapted over millions of years to fit their ocean environment. And many are at risk.
Corwin’s book encourages a serious respect for animals in their natural world. As he writes, “when we enter the ocean, we are entering their territory.” And he doesn’t avoid darker issues like the trade in shark products, which inevitably means there are a few disturbing images. One depicts the practice of shark finning, and comes alongside a discussion of threats to sharks (including climate change, pollution, and commercial fishing). This image shows butchered sharks alongside dozens of hacked-off shark fins. Another image shows shark fins stacked for sorting on a table. A final image is taken underwater and shows sharks twisted and trapped in fishing nets. These are the total of the graphic images, and are certainly no worse than is to be expected. Their inclusion does not, in my opinion, interfere with the book’s age-appropriateness, and are vitally important in any thoughtful book on the problems facing sharks.
And so Sharks is both a book about how remarkable sharks are – and a plea for their conservation. It is a readable and smart tribute to sharks that respects their uniqueness and their importance to the larger marine ecosystem. I should point out that, in a list of suggested actions, Corwin suggests readers visit aquariums – a recommendation that most animal activists would find counterproductive to the central theme of fostering respect for the lives of sharks. But learning and educated action is at the heart of this book, and many of the other suggestions are thoughtful and important. For example, Corwin, ever the ecologist, also encourages people to minimize their environmental impact, such as by avoiding single-use plastic items that end up in the oceans, as well as cosmetics that use “squalene,” derived from shark oil.
With this series, readers can cater their experience to their own visual preferences. What a smart way to encourage everyone to read about, cherish, and take action for animals!
*** 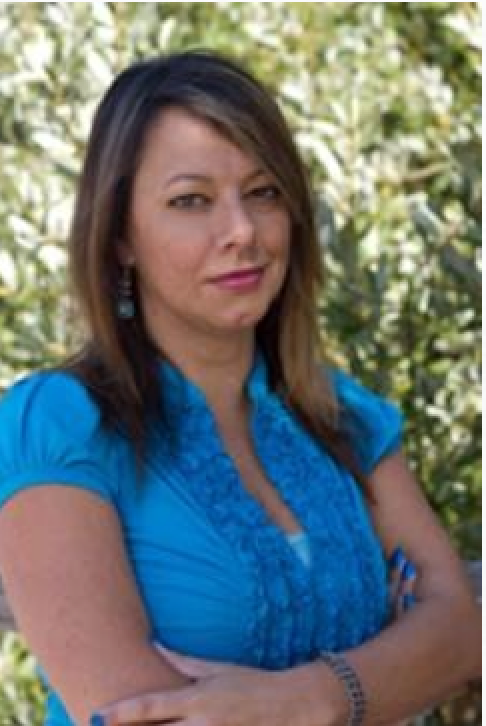 Jennifer Molidor earned her PhD in English and Irish Studies from the University of Notre Dame. Her academic work focuses on the politics of sexualized violence against female activists and writers in Ireland. A vegetarian for 15 years and a vegan for four months, Jennifer started her animal activism when she was a child. Later, she brought her companion animal to convalescent hospitals in a pet-assisted therapy program, and led the charge in fundraising campaigns for local humane animal shelters. She has also been a certified victim’s advocate at Sexual Offense Services, helping victims of domestic violence and sexual assault. For five years she has been an English professor at Kansas State University, and once taught a course called “The Politics of Food” at the University of Notre Dame. She is now the staff writer at the Animal Legal Defense Fund.

Vala Putting in a Request