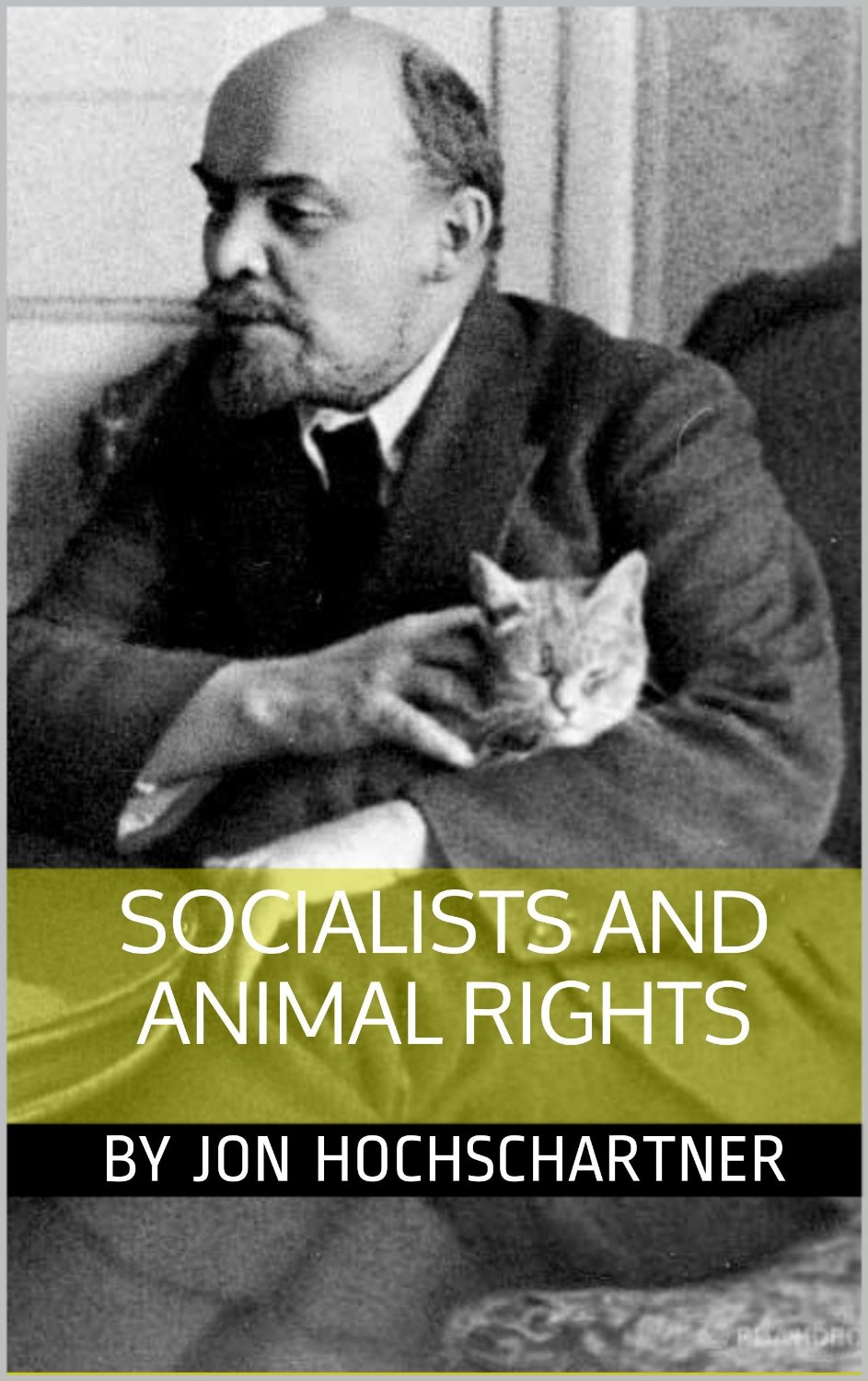 I’ve written before — both here on Our Hen House and on my own blog, Farmers Market Vegan — about the importance of intersectional activism: social advocacy informed by an understanding that various aspects of identity, and the ways beings are treated by the world because of such aspects, intersect in complex ways. For me, an important part of intersectional activism involves appreciating the significance of different social justice issues in and of themselves, not just how they relate to the one in which we’re most involved.

In volumes one and two of the series of short eBooks Socialists and Animal Rights (2014), author Jon Hochschartner connects socialism and animal rights in a manner indicative of the tenets of intersectional activism. While occasionally disorganized, Hochschartner’s first two eBooks clearly demonstrate that he understands both socialism and animal rights each as valuable in their own right, while illuminating the ways they inform and work with one another in the struggle for a more just society.
Based on an ideal of an economic and social system characterized by a cooperative management of the economy, socialism is diametrically opposed to the dominant economic mode of privatized, profit-centric, and hopelessly exploitative capitalism. As Hochschartner notes, socialists believe that we cannot dismantle racism, sexism, queerphobia, and other forms of oppression without also overthrowing the capitalist system. Hochschartner expands upon the existing socialist discourse by introducing speciesism into the mix of oppressions that require an anti-capitalist economic and social structure — a valuable endeavor considering his observation that “the socialist left remains particularly inhospitable for those concerned with animal rights.”
The crux of Hochschartner’s argument for the connectedness of the animal rights and socialist movements concerns the historical phenomenon in which dominant human groups linked subordinate groups to animals in popular imagination, thus justifying their oppressive position “by tapping into society’s widespread speciesism, which views the exploitation or oppression of animals as legitimate.” In Hochschartner’s view, challenging this speciesism in a large-scale manner will have two important effects: the dominant groups in our capitalist system will lose a tool for propagating the exploitation of subordinate groups, and society as a whole will understand non-human animals as a legitimate subordinate group worthy of including in the anti-capitalist struggle.
Alongside his own contentions regarding the intersections of animal rights and socialism, Hochschartner relays the claims of prominent contemporary socialist vegans, most notably celebrated activist and scholar Angela Davis, and International Socialist Organization member Alan Peck. For Davis, our blindness to the exploitation — of both humans and non-humans — inherent in the capitalist production of goods signifies “how capitalism has colonized our minds” by conditioning us to “look no further than the commodity itself.” She asks enticingly, “[W]hat is it like to sit down and eat that food that is generated only for the purposes of profit and creates so much suffering?” Peck echoes Davis’ assertion of capitalism’s psychological infiltration in his assertion that an overthrow of capitalism would be incomplete without also dismantling speciesism: “[T]he ideologies that support the infliction of unnecessary suffering on non-human animals in the interest of profit are the same ideologies that must be confronted and undone in the process of ending capitalism and building a better world.”
In the words of Hochschartner, Davis, and Peck, we can see an appreciation of animal rights and socialism each in their own right, as well as a helpful linking of the two important movements.
In addition to decrying the modern socialist movement in its failure to consider speciesism as a legitimate issue, Hochschartner offers a critical analysis of the current animal rights movement and its strategies, based upon the efficacy of past socialist-inspired movements. Hochschartner draws upon the free produce movement of the 1790s to 1860s, in which abolitionists boycotted good produced by slave labor…to little effect: “The institution of slavery was not threatened by this individualistic, consumer-based strategy.” Citing abolitionist William Lloyd Garrison, Hochschartner notes that unethical goods “are so mixed in with the commerce, manufactures, and agriculture of the world” that to attempt to combat exploitation (slavery, the commodification of animals) by refusing to use such goods does little more than attach moral guilt to the consumer.
As I’ve noted before, no, personal consumer choices alone won’t significantly threaten the economic success of exploitative industries, but they still comprise an important aspect of a larger movement, whether socialism, veganism, or others. Hochshartner seems to agree with this notion, citing Marxist animal liberationist Susann Witt-Stahl, who notes that personal veganism is primarily necessary not to end animal exploitation, but for “unbiased thinking” — for understanding animals not as objects but as “beings that strive for happiness,” which proves impossible for those who eat them.
With this quote, Witt-Stahl points to the imperative of shifting institutional and societal attitudes toward animals. Considering the ineffectiveness of past movements that have focused on private morality, as showcased in Hocschartner’s works, the animal rights movement would do well to accompany its powerful vegan advocacy with a strong push for change in public policy.
In Socialists and Animal Rights, Hochschartner connects the animal rights and socialist movements in a helpful, intersectional manner, while offering fair critiques of each of the movements — and that’s only in his first two volumes! Four more eBooks follow in the series, and it doesn’t look like Hochschartner has any intention of stopping there. I look forward to seeing his additional work regarding these two imperative topics.
Each eBook costs only $2.99, and you can purchase all six volumes on Amazon.

Episode 22 of the Our Hen House TV Show is Now Viewable Online!

Episode 288: “People get used to anything. The less you think about...