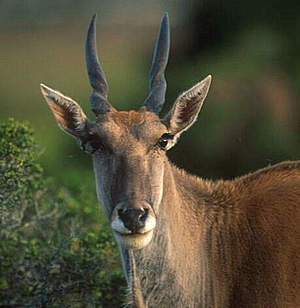 Today, we welcome Robin Lamont back to Our Hen House. She is reviewing Among Animals, the latest from Ashland Creek Press. Robin, who is the author of the animal rights-themed novel, The Chain (which we reviewed on Episode 205 of our podcast), last joined us when she gave us her take on the novel, Dog Boy. Today, Robin — who just joined Our Hen House as a contributing writer! — is digging into some short stories that focus on, you guessed it, animals.
***
Book Review: Stories to Savor in Among Animals
by Robin Lamont 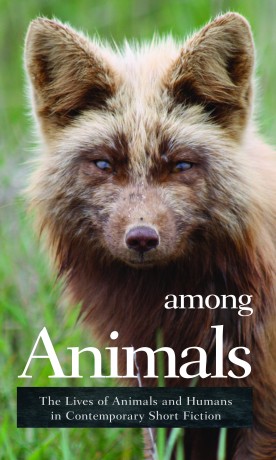 “Among Animals” from Ashland Creek Press

Animals abound in children’s books, but the narratives in adult fiction are almost always human-centric. So for those of us who crave fiction that explores the depth to which animals impact our lives, Ashland Creek Press gives us a unique collection of short stories in Among Animals. The beauty of the book lies in the different voices of the veteran short story writers and the variety of animals who come alive in each story. I loved that so many animals like emus, dolphins, bears, and pelicans are represented – animals I don’t often read about.
The anthology regularly reminds us, however, that the lives of a vast majority of our fellow creatures are tragic ones: animals abandoned on the street, slaughtered for their meat, or exploited for entertainment. So, too, the extinction of species is a theme that resonates through many of the stories and is underscored by the sadness of this permanent loss – often in ways that aren’t understood, though deeply felt.
In one such story – “Alas, Falada!” by Diane Lefer – an administrative assistant at a zoo is given the task of bringing the head of a dead eland to a museum where drawers of beetles are meant to pick the skull clean. At the prospect of this unnatural last rite, she steals the head. She has no plan in mind, just the conviction that she must provide the eland with a more respectful disposal.

When indigenous people kill an animal, they honor or propitiate it in some way, or so I’ve read, because only this will ensure that the animals will continue to thrive and allow man to kill them. When we euthanized Falada, we did it sadly, solemnly, without pleasure, to the best of our ability, with horror and with great weight, but we failed in the ritual that would ensure the multiplication and swarm of life.

In the end, even with all her good intentions, the zoo worker cannot find an acceptable solution to the grim reality that a large eland’s head, once frozen, is now thawing on her living room floor, and she resigns herself to delivering it to the museum. An unusual story, “Alas, Falada!” seems an allegorical tale about the sad possibility that someday all animals may be merely skulls in a museum.
Love and loss of a more personal nature are inextricably woven into several stories. A mother in “The Weight of Things Unsaid,” by Sara Dupree, has buried both the pain of her miscarriage and the death of her dog; they hover like ghosts over her relationship with her family. Her special needs daughter cannot stand to be touched and pulls away when her mother reaches out to pat her arm.

At that moment, I craved the feel of my missing dog’s soft coat. I remembered the times I’d let him sleep on the bed, how he’d lay his head on the pillow and snore like an old man through his black nose. How simple, loving an animal.

Touching and tender, the story affirms an uncomfortable truth for some, that love for an animal can be as powerful as the love for a child. 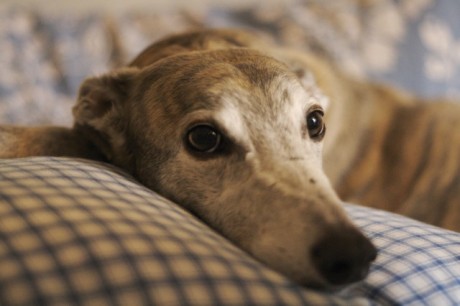 Animals also provide deliverance. “Greyhound,” by Jean Ryan, is the story of a woman and a damaged dog who rescue each other. It tells of the sad lives of greyhounds bred to race. Over the years, breeders have genetically altered the size of their eyes, their heads, their tails and legs, all leading to a dog who can run very fast, but is far more prone to injuries. Treated like professional athletes, the dogs are “fed and watered with precision,” but have little emotional contact with people. They are trained not to bark; indeed they are trained not to be dogs, but running machines. In this story, a racing greyhound named Fawn has been left at the pound because she simply stopped running and was thus considered useless. The traumatized dog is taken to a loving home as a present for Holly, who suffers from such severe skin rashes that she cannot continue her job at a daycare center. For a time, healing for both seems out of reach. Fawn is no trouble; she obeys on a leash, she is housebroken, she doesn’t bark or whimper. But nor does she wag her tail or seem to want human company. And she doesn’t run.
In this short story, a dog whisperer is not required. Patience and love are all that is needed to bring about the day when:

She springs forward, checks herself, and with a last glance at Holly she is bounding away jackknifing over the field. Holly reaches for my arm, and all we can do is watch as Fawn leaves us farther and farther behind. In seconds she has reached the edge of the woods and is turning back, closing in fact, racing without a reason, her body in full ecstatic stretch high above the ground.

Unfortunately, there is neither the time nor space to highlight all the stories in Among Animals; each one is dynamic and interesting. And with the wide diversity of voices, writing styles, and animals, there is something for everyone in this anthology.
***

Robin Lamont’s most recent novel is The Chain, the first in a suspense series featuring an animal rights investigator. Prior to becoming a writer, she worked as an actress, an undercover investigator, and an Assistant District Attorney in Westchester County (in that order). She now writes full time and volunteers for animal advocacy groups. Visit Robin’s website to learn more.
Share 0 FacebookTwitterPinterestEmail
previous post