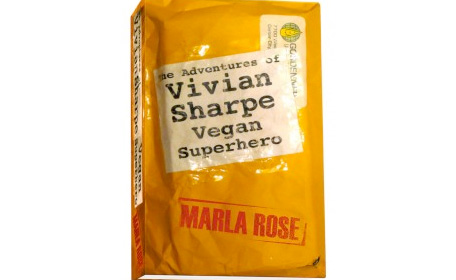 We are delighted to welcome back to Our Hen House guest reviewer Stephen Lukas, who is giving us his take on the exciting new young adult novel, The Adventures of Vivian Sharpe, Vegan Superhero, by Marla Rose. 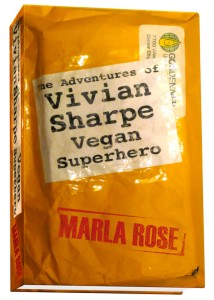 “The Adventures of Vivian Sharpe, Vegan Superhero” by Marla Rose

I initially agreed to review The Adventures of Vivian Sharpe, Vegan Superhero [Wide Awake! Books, 2012], by Marla Rose, because it was a story for young adults. My Hardy Boy years long since passed, it isn’t often that my attention is drawn to books written for that demographic, and so I couldn’t turn down the opportunity. In retrospect, I’m glad I didn’t, since this “young adult” novel is really a tale for all ages.

Vivian Sharpe is a vegan Nancy Drew – an inspired and determined 15-year-old who sets out to change her life, the environment, and the world – for animals. A lifelong resident of Center City, “in the middle of a state that grows a lot of corn and wheat,” it is after eating an otherwise innocuous ham sandwich at a barbeque that Vivian’s “regular, normal and unremarkable” life is turned upside down. Later that evening, dream fragments present like a horror movie: terrified shrieks and cries, gates slamming, loud motors, metal on metal chainsaws, and clanking gears. One particular vision keeps returning: “a pair of soft brown eyes with thick pale pink lashes curled down, unblinking, brimming with an immeasurable sadness and incomprehension.” When she awakens, Vivian discovers a pig spirit named Tolstoy gently levitating over the desk chair in her bedroom, reminiscent of the ghost of Jacob Marley who visits Ebenezer Scrooge in Charles Dickens’ A Christmas Carol.

Tolstoy initiates a conversation wherein Vivian soon learns that the noises and screams are images from a nearby slaughterhouse. After making the connection between that afternoon’s ham sandwich and her evening visitor, she is stricken with remorse. While not many of us commence our vegan journey with a visit from a ghostly pig, in many ways Vivian’s “awakening” unfolds as it probably has for many vegans: when she experiences the life-altering revelation that what she has always accepted to be food was, until recently, a living, breathing sentient being, there is a single moment of truth, a sudden clarity. Case in point:

She looked at Tolstoy and he looked back at her with a calm, almost apologetic look upon his face. There was no need to affirm or say a word; the little hairs on Vivian’s arms stood up, poking painfully against her pajama sleeves. They stared at each other wordlessly until Vivian finally collapsed forward in a heap.

“But I didn’t know a thing, Tolstoy. I – I didn’t know,” she trailed off, clenching her blanket. She couldn’t meet his eyes. “I never thought about it.”

Tolstoy charges Vivian with one task: “Observe.” As Vivian proceeds to do just that, she learns many lessons. First, of course, is her transformative food pilgrimage. This is subtly presented, in a way that would enlighten, but not frighten, a non-vegan reader. It takes her from an education about easy, tasty vegan foods – like peanut butter sandwiches and pasta – to a greater understanding of the full bounty of plant-based options. (How many vegans have traveled that familiar food path themselves?)

But Vivian’s evolution extends beyond simply taking the first necessary step of becoming vegan. Because of Tolstoy’s influence, she becomes empowered to go further, and to resolve to change the world for animals.

Vivian befriends an odd newcomer at Center City High – Wren Summer – who has been shunned by the rest of the students as weird. Wren, touchingly, is the solitary but steadfast member of the Vegetarian Club. That is, until Vivian joins. Their ensuing friendship depicts the value and importance of moral support, especially regarding passionate issues that – as many of us can relate – become our heartbeat. In each other, they find another tribe member.

Young Vivian also acquires an intuition about animals, following it blindly but with confidence. At a market, she develops an unsettling feeling of worry, and finds herself glancing over towards a man who is standing next to a large, dented cardboard box. Following her instincts, she discovers 6 tiny puppies huddled together in a corner of the box, atop soiled newspapers. Without even needing to think about it, Vivian boldly enters into a battle to rescue the frightened dogs.

But the primary controversy commences when Vivian rescues ducklings from a river behind the city’s largest employer, Gordenner U.S.A. The ducklings are covered with a thick, greasy, green slime. Suspecting this organization is polluting the main water supply, and determined to get to the bottom of what is really going on, Vivian gets herself hired as an intern in the Marketing department. There, she discovers that Gordenner is about to market a genetically enhanced seed and spray known as “Bountiful” to developing countries, the “miracle” solution to eradicate starvation. The reality, however, is far more sinister, and, once again, Vivian sets out to expose the truth.

In many ways, I experienced Vivian’s journey less as a work of fiction, and more as an allegory. The Adventures of Vivian Sharpe, Vegan Superhero is a contemporary David and Goliath saga, complete with entirely believable – and all too real – villains. Good-versus-evil is an ancient conflict that author Marla Rose refreshes in a latter-day setting. From the outset, I was unable to resist the urge to cheer on this accidental heroine.

It is impossible to overestimate the potential impact that this kind of “young adult fiction” can have on up-and-coming activists. The role of fiction in advocacy is vastly under-explored, and, like the young adult novel Out of Breath by Blair Richmond, The Adventures of Vivian Sharpe, Vegan Superhero is another fun, engaging tool to capture the attention and compassion of the animal rights movements’ future movers and shakers. As I can fully attest, even for not-that-new and not-that-young activists, this book has charm, poignancy, and validation that makes it the perfect easy-to-read story for a rainy Sunday (or a sunny Saturday).

President John F. Kennedy said: “One person can make a difference, and everyone should try.” The world, and all its human and non-human animals, would indeed be better off with more Vivian Sharpe vegan superheroes. I hope we hear more from her.

Stephen Lukas is a Human Resources Business Consultant working for a large, international financial services company. In July 2011, after 10 years as a vegetarian, he became a vegan. Stephen runs, practices yoga, volunteers at the local SPCA, and nurtures a manic addiction to vegan baking — all while shunning Facebook. He lives just outside of Halifax, Nova Scotia, Canada, with his husband of 18 years, Peter, their beagle, Gracie, and their kitty, Seamus. If you drop him a line atlukas[at]accesswave.ca, he will send you a picture of his new, vegan tattoo.